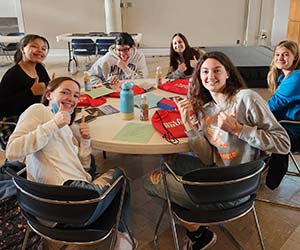 Plattsburgh Math Day returned to our campus on November 10, 2022 for the first time since the winter of 2020.

Eighty of the region’s best high-school mathematics students came to the Angell College Center for a day of contests, puzzles, mathematics talks, and mathematical games. Students (and their math teachers) made the trip from Chazy, Peru, Willsboro, Northern Adirondack, and Plattsburgh High Schools.

Dr. Naveen Somasunderam of the mathematics department gave a talk on mathematics in the art of M. C. Escher, and Brooke Layhee of the Global Education Office entertained the visitors with stories about her experiences as a Plattsburgh math major studying abroad.

All of the visiting high-school students participated in the American Mathematical Competition, a contest sponsored by the Mathematical Association of America designed to stimulate interest in mathematics and identify potential members of the next U.S. Math Olympiad team.

The day’s activities concluded with a spirited round of mathematical Jeopardy, guest-hosted by Professor Dexter Criss, of the chemistry department. 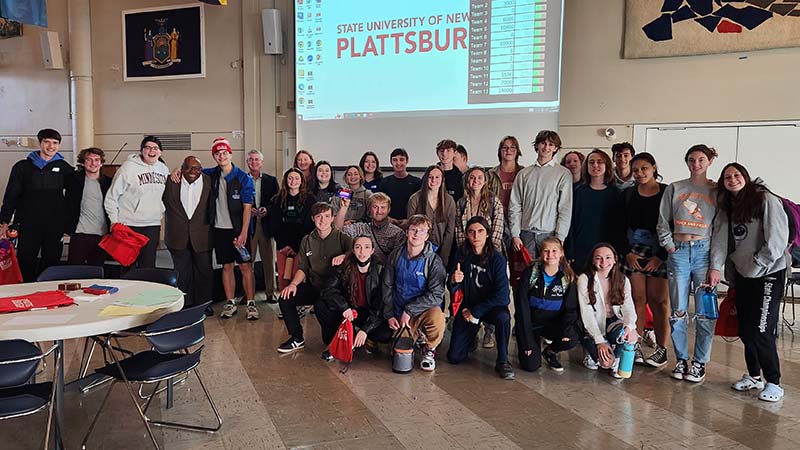 The conference brought together North Country Master Teachers and STEM faculty from SUNY Plattsburgh. Faculty members were invited to give presentations about their research or other topics that would be of interest to the K-12 teachers attending the conference.

Dr. Somasunderam gave a talk on p-adic numbers, explaining the modern construction of number fields and their associated arithmetic and geometry.  In Dr. Reams's talk, “How to Make a Distance Matrix”, he explained how distance matrices are used to determine the three-dimensional structure of protein molecules, based on inter-atomic distance data from NMR experiments.  Dr. Quenell gave a presentation on some of the mathematics — including probability, geometry, and combinatorics — to be found in the card game “Set”.

The SUNY Plattsburgh Mathematics Department hosted Math Day 2020 on January 30, 2020. About sixty students from area high schools came to campus for a day of mathematical activities including puzzles, talks by Professor Quenell and senior Alex Hepburn, the American Mathematical Competition, and two rounds of mathematical Jeopardy!, hosted by Professor Spindler.

A visiting student from Niskayuna scored well enough on the American Mathematical Competition to qualify for the next round of contests run by the Mathematical Association of America. He may well be on his way to a slot on the U.S. Math Olympiad team. 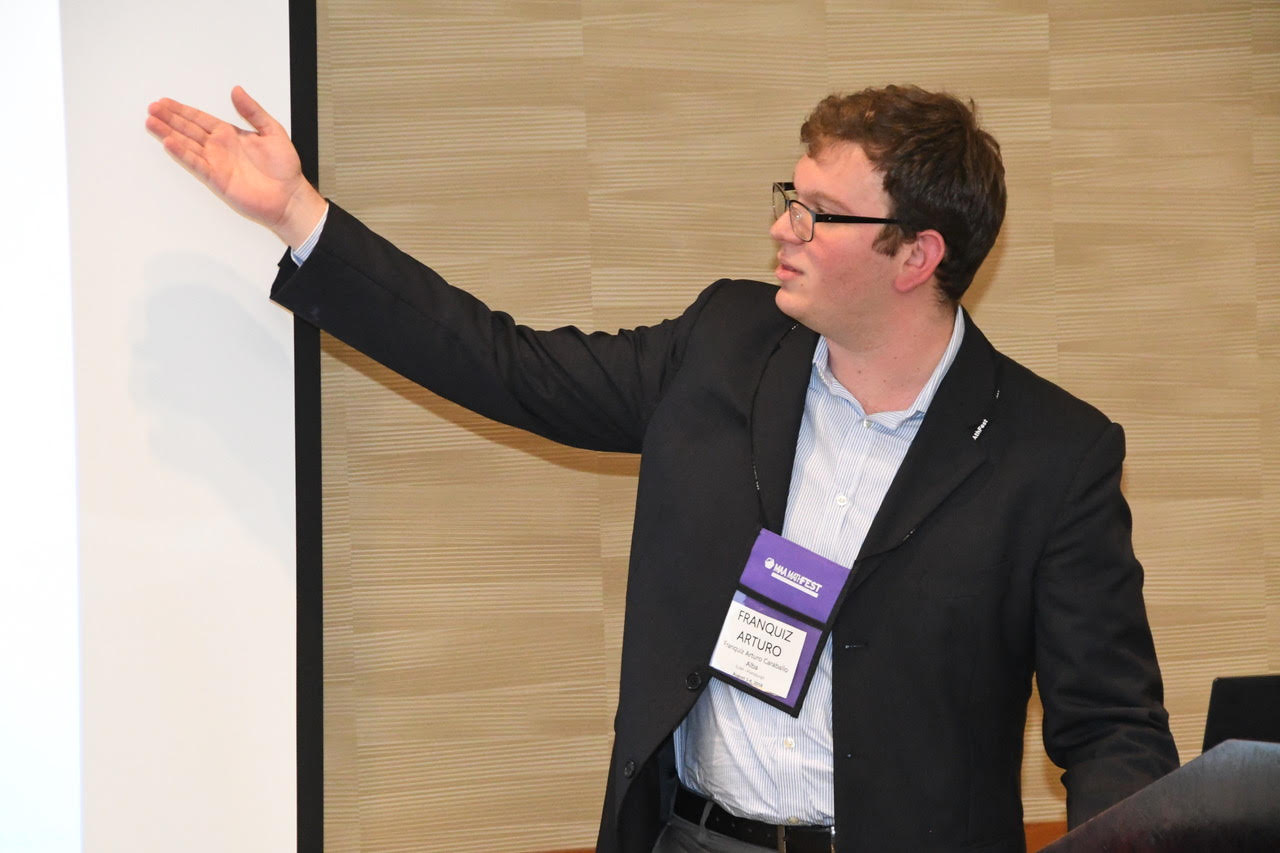 Each year, the Mathematical Association of America holds a summer Mathfest, a national meeting where faculty members, graduate students, and undergraduates meet to talk about their passion for mathematics.

Plattsburgh mathematics major Franquiz Arturo Caraballo Alba and faculty member Gregory Quenell traveled to Denver, Colorado for the 2018 Mathfest at the beginning of August. Franquiz gave a talk on relativity and hyperbolic geometry in the Pi Mu Epsilon Student Paper Session, and Professor Quenell gave a talk on mathematics and string art in an invited paper session on “Geometric Ideas and Where to Find Them.” Both Plattsburgh mathematicians attended numerous other talks, and visited with friends old and new during the four days of the conference. 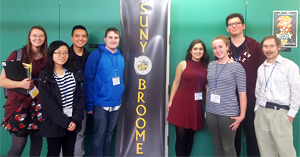 Twice a year, the Seaway Section of the Mathematical Association of America (MAA) gathers for conversation and talks about mathematics, teaching and academic activities. The Fall 2017 event on October 21 and 22 was held at SUNY-Broome, and 7 undergraduate students from SUNY Plattsburgh attended. They enjoyed each other’s company, talked about math (and other things!), and watched their fellow student Franquiz Arturo Caraballo Alba present his work on the path of a drone. 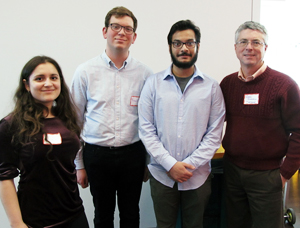 Three Plattsburgh students and one faculty member made the trip to Westfield State College in Massachusetts for the 24th Annual Hudson River Undergraduate Mathematics Conference. Gess Iraji, Franquiz Alba, Uday Singh, and Professor Gregory Quenell attended the conference, which featured about a hundred short talks on a wide variety of mathematical topics, along with a plenary address on mathematics and music by Harvard mathematician (and musician) Noam Elkies.

The New York Alpha Xi chapter of Pi Mu Epsilon, the national mathematics honor society, held its annual induction ceremony on Tuesday, April 18 in the Cardinal Lounge. Six Plattsburgh students, chosen by the mathematics faculty for their outstanding work in their mathematics courses, accepted membership in Pi Mu Epsilon. The featured speaker at the ceremony was Dr. Peter Hull, a mathematical economist from MIT and Microsoft. 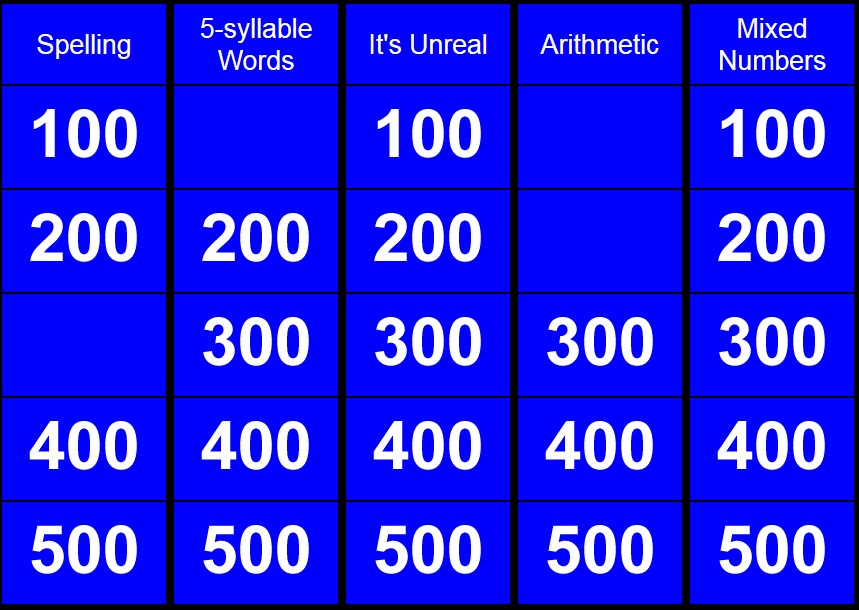 The SUNY Plattsburgh mathematics department hosted its third annual Math Day on February 7, 2017. About 80 high school mathematics students and their teachers came to campus for the event, which included the American Mathematics Competition (AMC12), talks by Professors Keever and Quenell, lunch at the Sundowner with members of the SUNY Plattsburgh Math Club, and a lively round of mathematical Jeopardy!, hosted by Professor Spindler. The visitors came from Plattsburgh High School, Seton Academy, Peru, Northern Adirondack Central School, Chazy and Saranac. 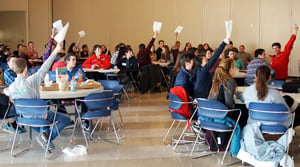 On February 2, the SUNY Plattsburgh Mathematics Department hosted about 70 students from area high schools at our second annual Math Day. The students and their teachers came to campus from Plattsburgh High School, Beekmantown, NACS, Chazy, Peru and Lake Placid to take part in the American Mathematics Competition, work on some math puzzles, attend some math talks and play two rounds of mathematical Jeopardy!, presented by our Plattsburgh Math Club. 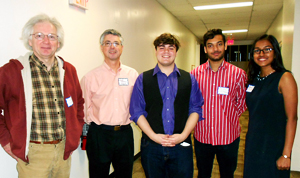 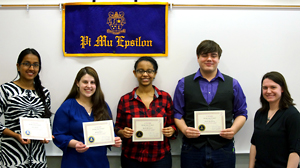 In an induction ceremony on April 20, 6 new members joined the Plattsburgh chapter of Pi Mu Epsilon, the national mathematics honor society. Giovanna Senese, the current chapter president, conducted the ceremony, and the guest speaker was Art Trombley, chair of the mathematics department at Chateaugay Central School and one of the inaugural class of North Country Master Teachers. 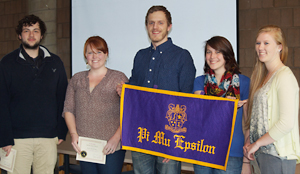 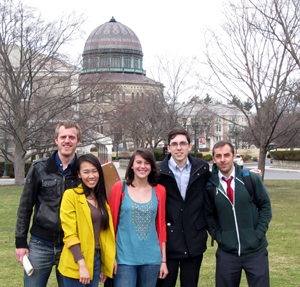 SUNY Plattsburgh was well represented on the conference program with 4 contributed talks. The Plattsburgh speakers were Kevin Boyette, Bradley Johnson, and Professors Northshield and Quenell. 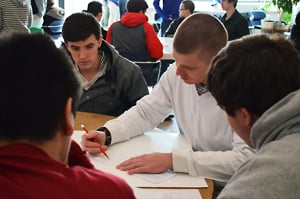 Tim Mulligan, a mathematics teacher at Plattsburgh High School, discusses a contest problem with some of his students. Photo by Jessica Karszen. 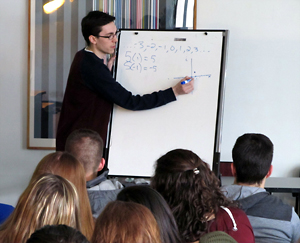 Bradley Johnson, a senior at SUNY Plattsburgh, explains the Gaussian integers during his Math Day talk.