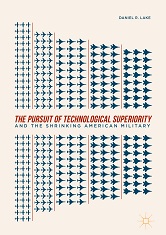 Dr. Lake wrote The Pursuit of Technological Superiority and the Shrinking American Military, published by Palgrave-MacMillan in 2019. This book analyzes the U.S. military’s efforts to gain and maintain technological superiority and shows how these are having the paradoxical effect of making the U.S. military more fragile even as it becomes more capable. His other research interests include coercion, particularly “gunboat diplomacy” and other forms of military coercion, how international norms and rules affect whether governments decide to go to war, and the impact of technological change on military organizations.