The Model OAS program at Plattsburgh serves as one of two capstones for the Latin American Studies major and minor programs. It is a semester long immersion into the political workings of a hemispheric organization involved in such issues as promotion of democracy, combating drug trafficking, the rights of indigenous peoples, free trade agreements, and public health. 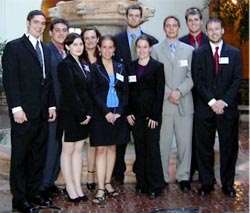 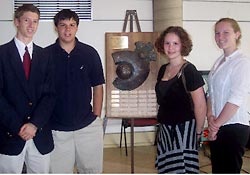 Students take on these issues from the point of view of one of thirty-four Organization Member States. Latin American Studies at SUNY Plattsburgh is a multi-disciplinary program composed of professors from the Anthropology, Economics, English, Foreign Languages and Literature, Music, Political Science, Geography, History, and Sociology Departments. In preparation for the Model OAS course, LAS 459 students take a series of content courses distributed throughout these departments as well as LAS111, an introductory survey.

Held in April of each year, the Washington Model Organization of American States is a week long simulation where an eleven member delegation of Plattsburgh Students participate in debate with schools from around the United States as well as from other nations of the Americas. Part of the program takes place inside the Pan American Union Building, located just off the Washington Mall and only a short distance from The White House.

SUNY Plattsburgh delegations, under the guidence of Dr. Stuart Voss, Distinguished Service Professor of History, have been participating in the Model Program for over two decades.

The Model OAS involves developing skills in research, diplomatic affairs, parliamentary procedure, and debate. The course begins with a historical overview of the country which often include guest lectures from various Latin American Studies professors. From there students receive an introduction to the structure and organization of the OAS as well as training argumentation, questioning, and the practices and procedures used for formal debate at the Model

Students are responsible for various assignments ranging from abstracts of scholarly articles and OAS reports and the questioning of diplomatic personnel, the preparation of position papers on committee topics and a resolution to be debated at the Model itself.

In addition to the week in Washington, D.C., the Model Delegation travels to Ottawa, Canada to participate in embassy briefings by ambassadors and their staff from countries around the hemisphere. These briefings have, in the past, included interviews with embassy staff of the country the SUNY Plattsburgh delegation is representing, as well as the Canadian External Affairs Ministry. In addition the team will visit at least four other embassies from countries representing the various sub-regions of the Hemisphere.

In addition to the University-Level Model OAS, each June SUNY Plattsburgh hosts the North Country High School Model OAS for participating high schools from Northern New York and Western Vermont. This program can be taken for college credit as LAS110, and is designed to fulfill the New York State Participation In Government requirements for K-12 education requirements in New York State. Dr. Stuart Voss organized the creation of this regional High School Model in 2001. Approximately 18 High Schools participate now, many taking on the role of representing more than one of the OAS Member States.

Each year’s University Delegation is given the option to return and serve as the staff of the High School Model. Alongside them, high school students are able to participate as rapporteurs(committee secretaries) and news reporters in addition to those positions within delegations. High school students follow a course curriculum similar to that of the university level. They are also invited to come to SUNY Plattsburgh on the last Monday in April for Model OAS Day, where the college team will demonstrate a mock debate, as well as answer any committee-specific questions high school students may have.

Since 2005, a regional delegation composed of high school student participants in the NCHS-MOAS has joined together to represent the entire program at the National High School Model OAS program held in Washington, D. C.