Tom Corigliano has had enough of SUNY Plattsburgh, if enough means 48 years of service.

The 73-year-old associate provost at SUNY Plattsburgh Queensbury will retire at the end of May after a career that started in the counseling office on the Plattsburgh campus after having spent a couple years in public school counseling. A 10-month appointment as of September 1968, however, turned into a 12-month stint by the end of that year when the dean of students told Corigliano and his two colleagues that he needed them to work summer orientation.

“We had wanted 10-month appointments; we were looking forward to our summer plans,” he said. It wasn’t the kind of request you could turn down back then, he said. “So the three of us became 12-month employees.”

The early 1970s saw enrollment and budget concerns and Corigliano, a member of a committee charged with looking at advising, was asked as a result to develop an organized advising program. He moved from his counseling position in student affairs to become assistant to the vice president of academic affairs.

Never one to become complacent, Corigliano said by the early 1980s, he was looking for another challenge, and it manifested itself in the form of United University Professions. He became involved at the Plattsburgh chapter level, served as vice president for professionals for a while, took on the presidency for a few years, worked with the state-wide UUP contract negotiations committee and served as a state-wide delegate before being asked to run for state-wide office.

“I was elected vice president in 1986 and served until 2001,” he said. “It was really very good for me. I’m normally a shy guy, and this forced me to get out of my shell. I had to sell the program to the membership. I had to defend the acts of the union, give delegate reports, travel across the state.”

With an arrangement at SUNY Plattsburgh to be able to return when he was finished, Corigliano picked up where he left off — after a fashion — in 2002.

“The program in Queensbury was very small at the time. They only had graduate-level programs. I was there to advise graduate students half time, and working in (Daley’s) office part time, reporting to her,” he said. With his wife, Class of 1985 alumna Judith, holding a tenured teaching job in Albany at that time, he would ricochet up and down the Northway, putting in a few days in Queensbury, returning to put in a few days in Plattsburgh. It was close to that time when Dr. Robert Golden was brought to Plattsburgh as the new provost and vice president for academic affairs.

“It was serendipity, really,” Corigliano said. “The program in Queensbury was under continuing education. Bob met with the folks who worked under him, and when he met with me, he asked what I did in Queensbury, how many students were enrolled, course numbers and whether it was a viable revenue source.”

As a result of that meeting and follow-up reports, Corigliano and Golden began to discuss bringing SUNY Plattsburgh bachelor’s degrees to Queensbury. By 2004, Golden, Corigliano and Dr. Patricia Higgins, then-associate vice president for academic affairs, worked on creating the first two bachelor’s degree programs — psychology and computer science — at the extension site and guiding the approval through SUNY and the State Education Department, among other authorities.

‘I’ll Give Him Two Years’

“Bob asked me what my plans were and if I would serve as director of the extension site. I told him I’d give him two years for sure. So, I gave him two years in 2004. Twelve years later, here we are,” he said. “None of this would have happened without Bob Golden. The ‘serendipity’ was me being in the right place at the right time. I am extraordinarily proud of my role in helping to create and develop the branch campus, and I’m enormously thankful for having had that opportunity.”

“When we were contemplating creating a larger presence in Queensbury and the Glens Falls region for the college, we were extremely lucky to have Tom already present there as part of his workload,” Golden said. “Tom was the ideal person to have in place to manage the site because of his considerable experience as a counselor and academic adviser, his experience in handling budgets, his attention to detail and his ability to work with people. Tom was really the ideal person for the job, and his performance over the years has more than justified the hopes the college had for his success in that role. I should add that Tom was also a lot of fun to work with. I hope that in his retirement, Tom will get to see the Yankees once again in their rightful place as World Series champions.”

“Tom Corigliano is a class act — professional, prompt, reliable, courteous, kind, thorough, and fun to work with,” Danna said. “He was my mentor as I transitioned from preK-12 education to higher ed. He and the rest of the office staff and faculty at the branch campus are like family, which is probably why Tom stayed on the job so much longer than others. He was surrounded by people who loved and cared about him as much as he loved and cared about them. His only weakness is Martha’s peanut butter ice cream. I know this because he and I have gotten a lot of ice cream these past few years.”

Corigliano, who received the Chancellor’s Award for Excellence in Faculty Service in 2011, has carried the college mace during commencement ceremonies as one of most senior faculty and staff members at SUNY Plattsburgh.  At the spring commencement May 14, he carried the ceremonial scepter for the last time.

So, he won’t have to. Corigliano agreed to work a quarter-time position to assist the new academic adviser at the branch, Emma Bartscherer, a 2014 alum currently serving as assistant director for annual giving in Institutional Advancement.

“I’m going to be there to help Emma with the transition,” he said. “It’s kind of overwhelming, when you do a job for a long period of time. Some things become automatic to you; for the person coming in to take over, there’s just so much to learn. So, I’ll come in at certain times, spend some time with her, brief her on the process. It’ll be much smoother for her, the office and the students, and it allows me to cut that bond a little more slowly.”

“He’s been a stalwart at SUNY Plattsburgh for almost half a century. He was instrumental in establishing our degree completion programs at our branch campus in Queensbury. There are many SUNY Plattsburgh graduates in Warren, Washington and northern Saratoga counties who were rewarded through Tom’s dedication to creating baccalaureate degree opportunities for them.” 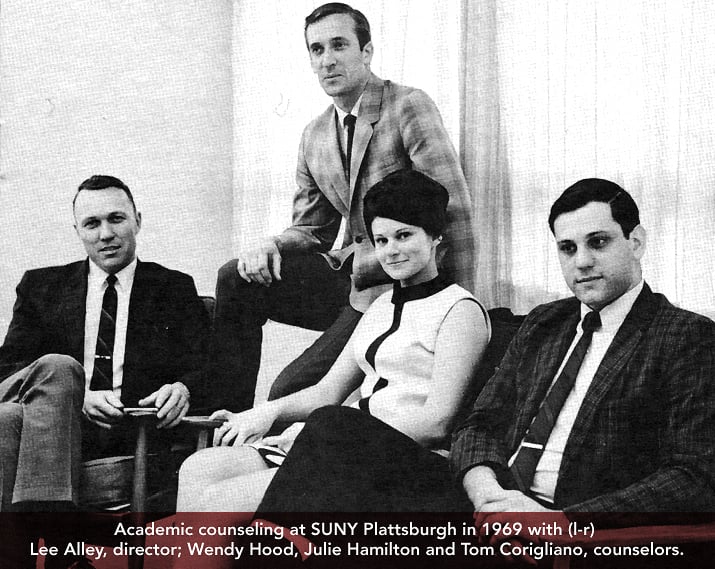