Although it’s associated with modern technology, SUNY Plattsburgh’s computer science department has a history that’s older than some alumni.

In fact, the department officially marked its 40th anniversary this fall.

And it’s come a long way since its inception: While today’s students can access interactive maps over their phone, students back then had limited access to technology, entering data via punch cards.

And as computing technology has evolved, so has the knowledge necessary to harness its power.

In 1970, before it began offering two degree programs, the department offered just a handful of classes. Its creators had relatively modest goals at the time, said Julius Archibald, a professor emeritus who was the department’s chair from 1974 to 1996.

A group of faculty members – led by Dr. George Sheats of the chemistry department and Dr. Paul Szydlik of the physics and earth science department – had been pushing for years to form the new department. At the time, such instruction was needed, not only to complement existing programs, but also “to maintain the currency of the overall academic programs,” Archibald said. 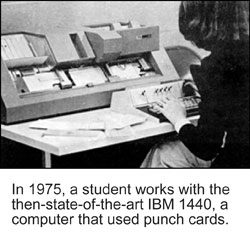 The equipment wasn’t quite on the level of an iPad. An IBM 1440 was shared with college administrators, and access was through manually delivered punch cards and retrieved printouts. Students also used a bigger computer – a UNIVAC 1108 scientific computer on the campus of SUNY Albany – that was accessed remotely via a Teletype machine.

“Digital electronic computation was available only through centralized facilities, and remote access was still a novelty,” Archibald explained.

The department’s first degree program, which continued the emphasis on scientific applications, became effective in the fall of 1974.

As computing power grew, so did the department – and technology took a major step forward in the ’90s.

“It was through the acquisition of microcomputers that we became independent of the centralized system for instructional computing,” Archibald said.

Today, the department offers majors and minors in computer science and information technology. Students take advantage of three computer science labs with Linux workstations in addition to the PCs and Macs available at the college’s main computer lab in Feinberg Library.

The Future is Bright

Plans are for the department to upgrade yet again in 2012, when it moves into a new building that will be shared with the college’s School of Business and Economics.

Dr. Jan Plaza, the current chair, said the department is strengthening its focus on computer security and forensics, as well as on Web programming. Students will also be able to explore bioinformatics, he said.

“The department has a strong commitment to hands-on education and applying theory to real-world examples,” Plaza said.