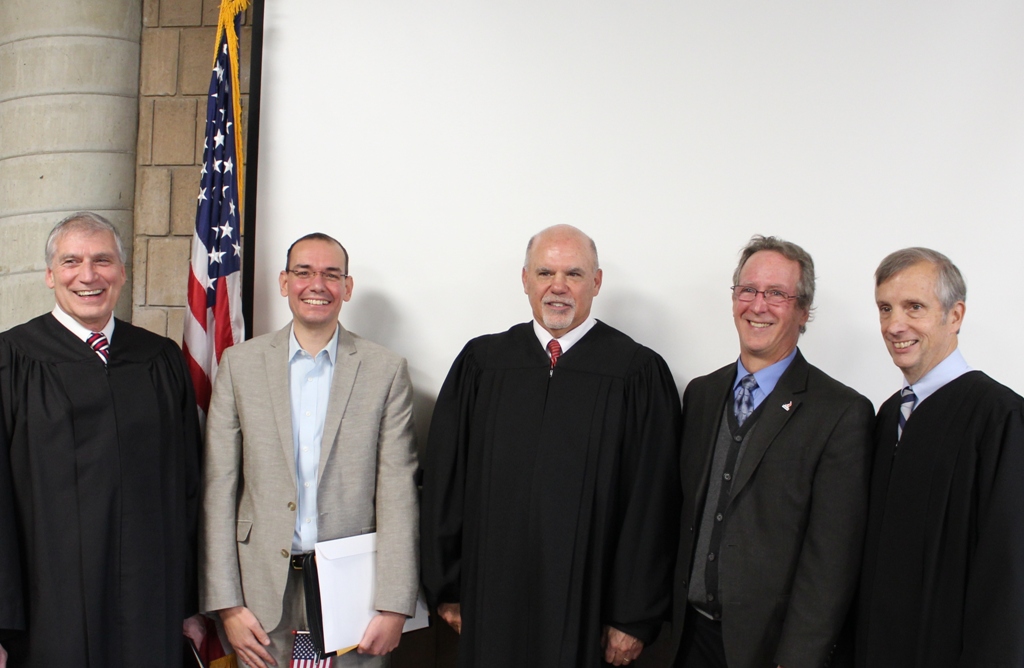 One of SUNY Plattsburgh’s own crossed the threshold to his American Dream Friday, Oct. 25 he and 28 others were declared citizens of the United States of America at a naturalization ceremony for the U.S. District Court, Northern District of New York.

Dr. Dhimitri Qirjo, a native of Albania, is an associate professor of economics in the School of Business and Economics, having joined the faculty as an assistant professor in 2012.

The ceremony was presided over by the Hon. Glenn Suddaby, a member of the Class of 1980, along with fellow alumni U.S. Magistrate Judges Christian Hummel ’77 and Gary Favreau ’73. They welcomed 29 citizens who hailed from 21 countries at the ceremony, held in the Alumni Conference Room of the Angell College Center.

It has become an annual October event on the SUNY Plattsburgh campus, with the college inviting the judges back to campus in what Josee Larochelle, vice president for administration and finance and office in charge, said was a “a moving time, an important time for each person in attendance today.”

She congratulated Qirjo, saying, “We are particularly proud of one of our own.” 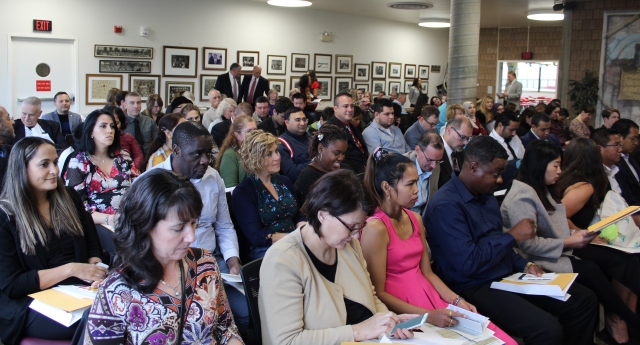 Suddaby, acting as master of ceremonies, welcomed the standing-room-only crowd, spoke on behalf of his fellow judges, saying “it’s always a great pleasure and honor to preside over this naturalization ceremony at SUNY Plattsburgh. We’re so happy to be back at our school.” 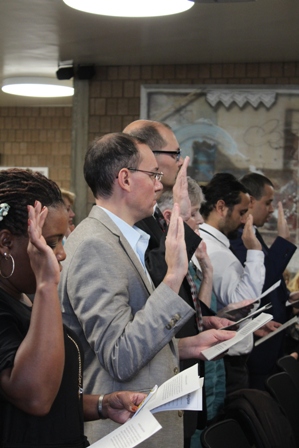 Of the naturalization event, Suddaby said it’s “what makes our country strong and diverse.”

Qirjo was 13 when communism collapsed in his country, and that had a “tremendous effect on me,” he said. That led to what he described as his “desire to seek new experiences in other foreign lands.”

He earned a bachelor’s degree from Aristotle University of Thessalonika in Greece and, wanting “to learn more about my studies but also eager to learn more about life in other developed economies outside of Europe,” he traveled to the United States to earn a master’s from Florida Atlantic University.

“I really fell in love with economics during my short graduate studies at FAU,” Qirjo said. A Ph.D. from Florida International University followed where he specialized in the intersection of international trade and economics of immigration. A stint as a teaching and research post-doctoral fellow at the University of British Columbia led to his being hired at SUNY Plattsburgh.

Proud to be in the SBE

“I am a proud member of the economics and finance department,” Qirjo said. “I enjoy teaching students about economics, especially about the international trade and economics of development topics.” He also collaborates with students in research projects that have resulted in co-published works.

Another U.S. current event was addressed Friday, with Favreau telling the assembled that immigration is something “I’m pretty passionate about.” He asked the group if there were any Native Americans in attendance. Two hands went up.

A Country of Immigrants 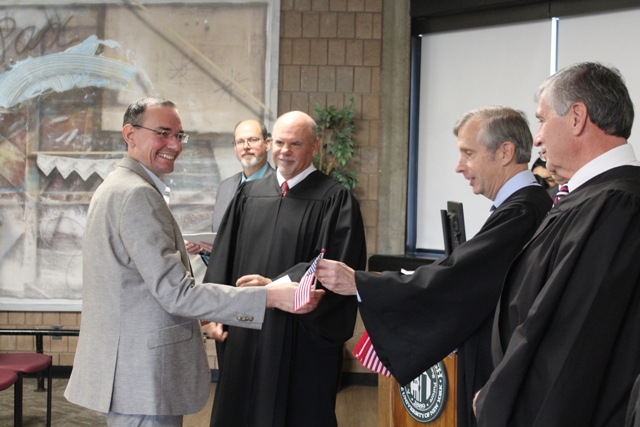 “With two exceptions, everyone in this room is an immigrant or a direct descendent of an immigrant. The United States is a country of immigrants; it’s founded by immigrants. Some of us were lucky to have been born here; others made a conscious and deliberate choice to become a citizen,” Favreau said. “There are not typical citizens; we are all individuals. We are a patchwork quilt, all citizens, just as if you’d been born here. Citizenship grants you many rights and privileges; you have a duty and responsibility to participate. It’s important that you vote, that you debate, that you serve as jurors. And never forget the hundreds of thousands of people who have died to protect our rights and values.

Qirjo was grateful and excited to participate “in the final step of my immigration journey,” he said.

“I have been living for almost 15 years in this wonderful country, and I am extremely satisfied that I will formally become a U.S. citizen. Am and also very glad that this final step will take place at the same institution where I started the first step.”

‘We’re Lucky to Have you’

“You make this a better, more diverse and interesting place,” Hummel said in closing. “Thank you for letting me be part of your special day. You are the highlight of my week — probably of my month. More importantly, thank you for selecting our country to be your country. We’re lucky to have you. The future of this country is people like you, whose goal is to make your lives, to make your children’s lives, and to make our lives, better.”

For Qirjo, it is a dream fulfilled.

“It has been a dream of mine, since I was a little kid first starting to read about the history of the United States of America and its democratic values, to be part of the Home of the Brave and the Land of the Free.”