When alumni arrived back on campus this summer to see their friends, the reaction was the same — hugs, smiles and more hugs.

“Plattsburgh was my first home away from home, so I really enjoyed coming back to reminisce and celebrate with my class,” said Renee Bonneau ’07. “Beyond that, I also did a lot of networking and received some great career advice.“

Alumni from as far away as California came back to take part in events like a lakeside barbecue, a bus tour of the region with former Vice President for Student Affairs Bill Laundry, wine tastings, a career networking panel, a social gathering at Hawkins Pond and for those celebrating 50 years or more, a golden anniversary luncheon. 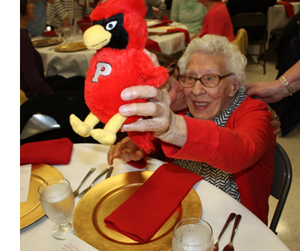 At 99 years old, Vedora (Barcomb) Maloney ’39, was the oldest in attendance. She was accompanied by her daughter, Elaine O’Connor, and granddaughter, Savanna O’Connor, who graduated from the college 70 years later in 2009.

“It meant a lot to mom to be able to come back,” O’Connor said. “She holds much fondness for this school and her time here. She even had us stitch her class year onto the red sweater she is wearing today.”

That same “Plattsburgh Pride” was felt by many attendees throughout the weekend. At various events, alumni were recognized for their post-graduation achievements, as well as their dedication and commitment to the college.

Stanley Fifield ’62 proudly accepted the “Robert M. Garrow Alumni Service Award,” which recognizes an alum who has demonstrated outstanding service to their alma mater and does so in keeping with the traditions of SUNY Plattsburgh.

Dr. Edmund Adjapong ’12 received the “Off to a Good Start Award” for his continued education and career success. Adjapong teaches science at a middle school in his hometown of the Bronx, serves as the founder and director of The Science Genius Academy, a program that encourages and prepares students to pursue STEM careers while providing mentoring and support, and recently received his Ph.D. from Columbia University. He is also a contributing writer for The Good Men Project, where he writes and speaks about issues of race, diversity, social justice and education.

“These individuals not only are outstanding citizens and role models to all who know them, but they also have a very strong connection to the college,” said Kerry Chapin-Lavigne ’98, interim director of alumni relations, during her remarks.

Also honored was the Class of 1957, members of which received the first-ever Reunion Class Challenge Trophy. This award was presented to the class with the highest percentage of donor participation over the course of the fiscal year.

“The purpose of the reunion challenge is to create a fun competition between classes while at the same time increasing giving participation among our alumni,” said Paula Bachman, associate director of annual giving. “While the class of ’57 took home the trophy, the class of ’67 was not far behind, trailing only by five donors.”

The reunion classes together presented President John Ettling with a check for $1,221,397.04.

"This generous gift is a shining example of how SUNY Plattsburgh alumni remain active and invested in the college long after they graduate," Ettling said. "We are extremely appreciative of this collective contribution and thankful for the ways in which so many current and future students will benefit."

SUNY Plattsburgh’s fiscal year ends June 30. At this time, only 400 more alumni gifts need to be made in order to secure the $50,000 challenge gift. 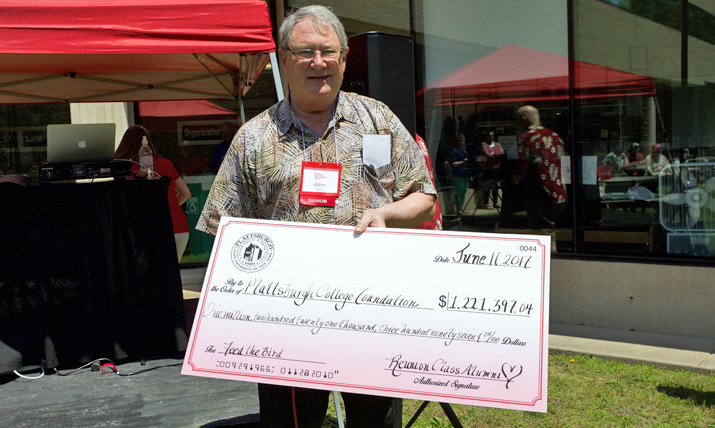 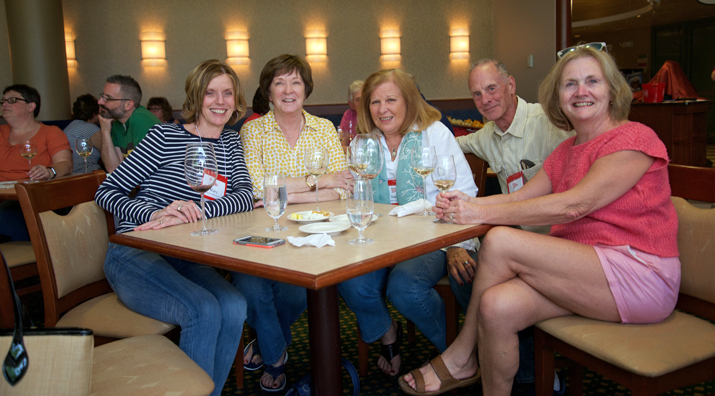