Students Brought On Board for Climate Change Research 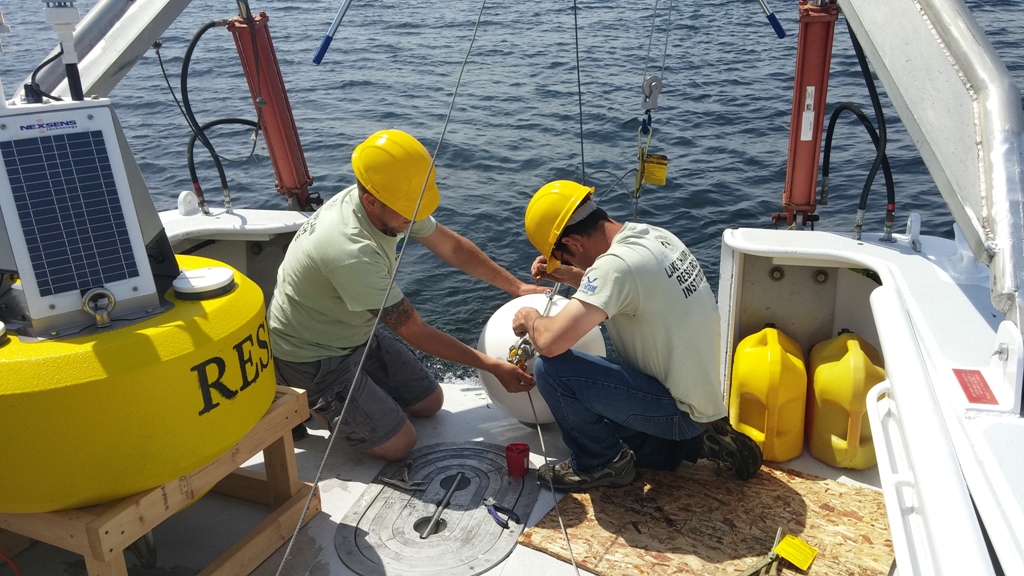 SUNY Plattsburgh climate scientist Dr. Eric Leibensperger is giving students the chance to engage in research that begins on the deck of a boat in Lake Champlain.

Students are assisting the Chancellor’s Award recipient and associate professor in the Center for Earth and Environmental Science aboard one of the Lake Champlain Research Institute’s vessels, placing buoys on the lake that record such data as air temperature, pressure, sunlight, wind and water temperature. Data collected will help determine the effects of global warming on the lake and its environs.

“To be able to take part in the field work necessary to collect data for research has been a great experience, and I believe it will help me further in my career as I enter the workforce,” said environmental science major Jared Kondas. It’s given the senior from Stillwater, N.Y., a better understanding of what goes on in the field, which isn’t always easy to do in the classroom. 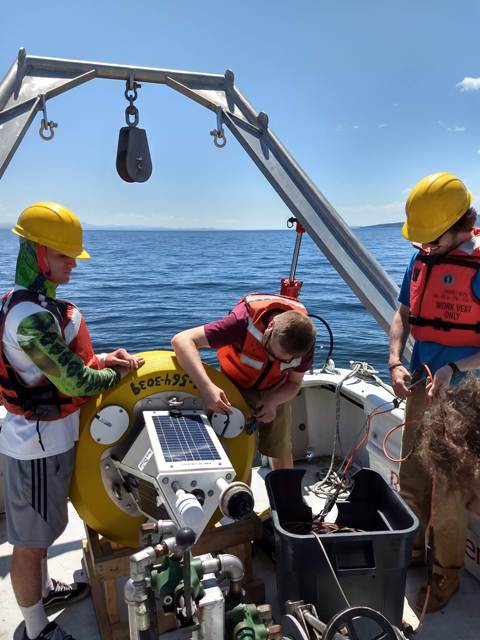 “The experience working with Eric and launching the buoys that monitor lake conditions helped me see more in depth into the fieldwork side of my major and what jobs may be expecting from me in the future. I’m grateful for the opportunity to participate in the research because of its real-world application.”

“It’s cool to see how large-scale projects are created for research,” said classmate Shawn Leighton of Seaford, Long Island. Leighton came to Plattsburgh to major in environmental science and is just getting started in climate change research with Leibensperger. “I’m very happy to be able to help and am excited to continue with this research in the future.”

“Students collect data, help with the lake project,” Leibensperger said. “They’re the ‘nuts and bolts’ of the project, putting out the buoys, making sure the lines are secure, learning the machinery of research. This is where they’re able to take what is discussed in the classroom and apply it. They’re learning how it’s actually done.

“In the lab, they’ll look at the data that’s collected, analyze it and write computer scripts to better understand what the data is showing us,” he said. “That’s the whole point of bringing students out into the field — to help them find the connection.” 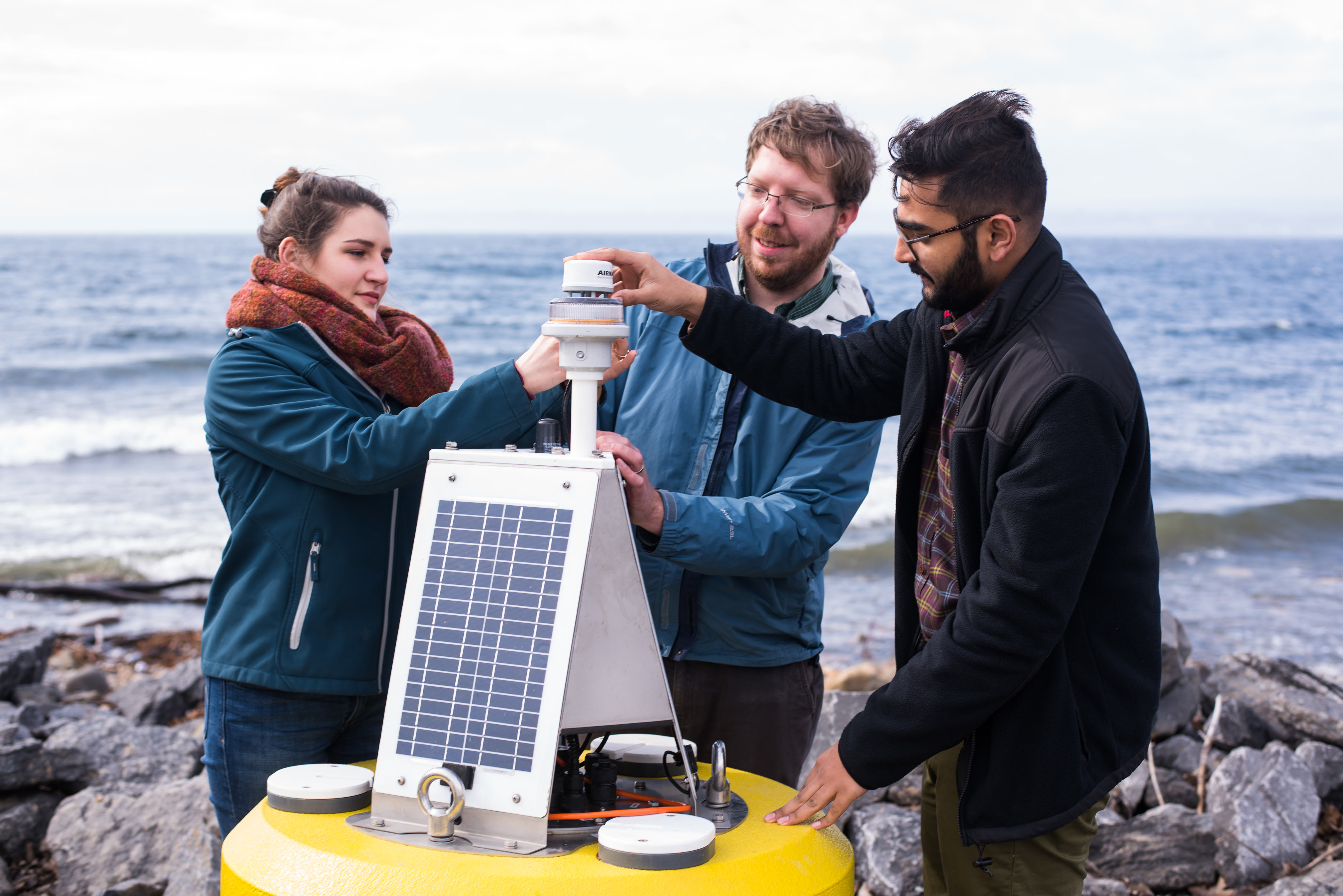 Grace DeSantis, a 2017 environmental science graduate and Chancellor’s Award for Excellence recipient, worked with Leibensperger during her time at the college, collecting lake water and air samples. DeSantis, who is pursuing a masters in urban planning and an advanced certificate in sustainability from the University of Buffalo. After collecting samples, they returned to the lab to determine at what rate and in what direction the exchange of carbon was going — from the lake into the air or from the air into the lake.

“In other words, we wanted to know if the lake was a carbon sink or a carbon source and whether or not its role changes seasonally,” DeSantis said. “Since carbon dioxide is a greenhouse gas that contributes to climate change, this information can inform lake management and climate mitigation strategies. Working on this project initiated my involvement in climate research, an activity that I have continued beyond my undergraduate experience. I’ve been able to expand upon the knowledge and skills from the Lake Champlain carbon flux research in my current research on urban microclimates and climate-change planning.”

Even if climate change is, as Leibensperger says, “unequivocal,” what inspires him is his students.

“The temperature of the planet is going up; and we know it’s caused by humans,” he said. “And we’re seeing it all over the world. Fish are moving further north; warm-water coral is at an increased risk. Sea ice has dramatically decreased — the polar bear has become the poser child for climate change for a reason. This is all a symptom.

“And when my students ask me if there is hope, I say yes, there is hope. The biggest hope, and the most inspiring part of all of this is our students, our young people,” Leibensperger said. “They want to change the world. They still have the ambition and desire. I see their wanting to take on these problems; our children are always our best asset.”

And when people question the science, Leibensperger said all you can do is offer the information.

“While the drive to do work related to climate change began as a result of studying environmental science at SUNY Plattsburgh, I think what really has fueled me is the realization that climate change is already impacting communities,” DeSantis said. “Right now, my work in the arena of climate change is mostly focused on urban environments and the spatial, demographic, and built environment factors that drive people’s experiences of the climate.

“Not everyone is impacted in the same way by extreme heat, cold and other weather-related events — factors such as location, age, race, gender, income, housing characteristics, neighborhood land cover and others drive people’s capacity to come with and adapt to climate change,” she said. “By understanding what makes people vulnerable, we can then inform better climate change mitigation and adaptation strategies.”

“We have solutions,” Leibensperger said. “It’s tough, but we have to take heart in the environmental successes we have had,” he said. “Climate change is one of the biggest challenges humans will have to tackle, but we’ve made significant improvements in air quality; the hole in the ozone layer was initially a problem and we’ve solved that with the Montreal Protocol. We all signed it and came together. We’ve ID’ed the problem; we have our goals; now we have to focus on how to reach them.”