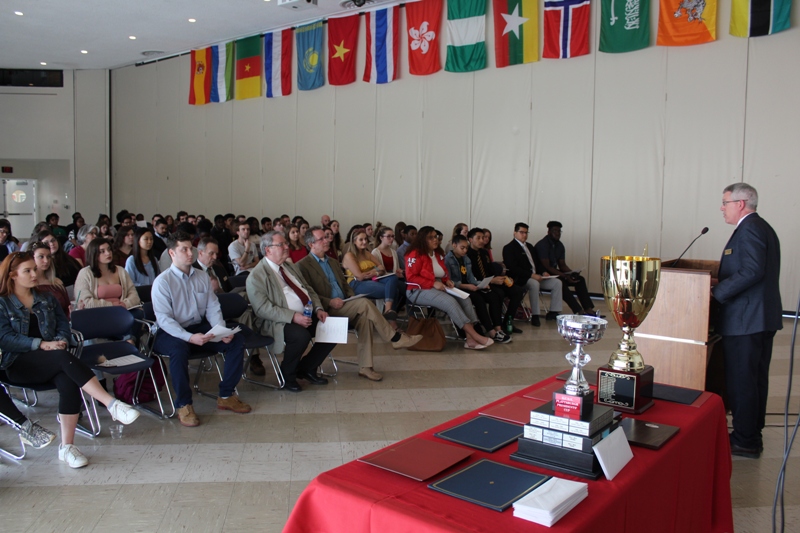 Students in volunteer and leadership roles on campus were honored and recognized at the 39th annual Student Recognition Ceremony for Leadership and Service April 23.

Hosted by the national leadership honor society, Omicron Delta Kappa, and Project HELP, more than 100 students turned out to be cited for their contributions to campus and community. Bryan Hartman, vice president for student affairs, presided over the ceremony, and invited President John Ettling and Plattsburgh Mayor Colin Read to say a few words.

“I would like to thank you for all you do as representatives of this campus and out of the goodness of your hearts,” Ettling said. “In my 15 years here as president, I’ve seen students traveling to the Gulf Coast to assist in the recovery after Hurricane Katrina and on and on from there, taking on tens of thousands of volunteer hours every year, raising tens of thousands of dollars for charitable causes. You’re extraordinary, and we are enormously proud of you.”

“We’re so proud to have you in our community,” Read said.

Hartman then offered that this academic year, “through Project HELP alone, more than 15,000 volunteer hours will be completed at sites in the greater Plattsburgh community.”

“If you add in service hours completed through Alternative Breaks, the student-athletes and members of fraternities and sororities, the service total grows even more,” he said. “The college has estimated that SUNY Plattsburgh students spend more than 300,000 hours each year engaged in curricular and co-curricular activities that benefit the local community. The impact of these efforts is immeasurable, and we are truly grateful for all that you do.”

In calling Read back to the podium to hand out the first award of the ceremony, Hartman said that the Mayor’s Service Award, “now in its 29th year, was created by former Mayor Clyde Rabideau to recognize individual and group contributions to the Plattsburgh community. 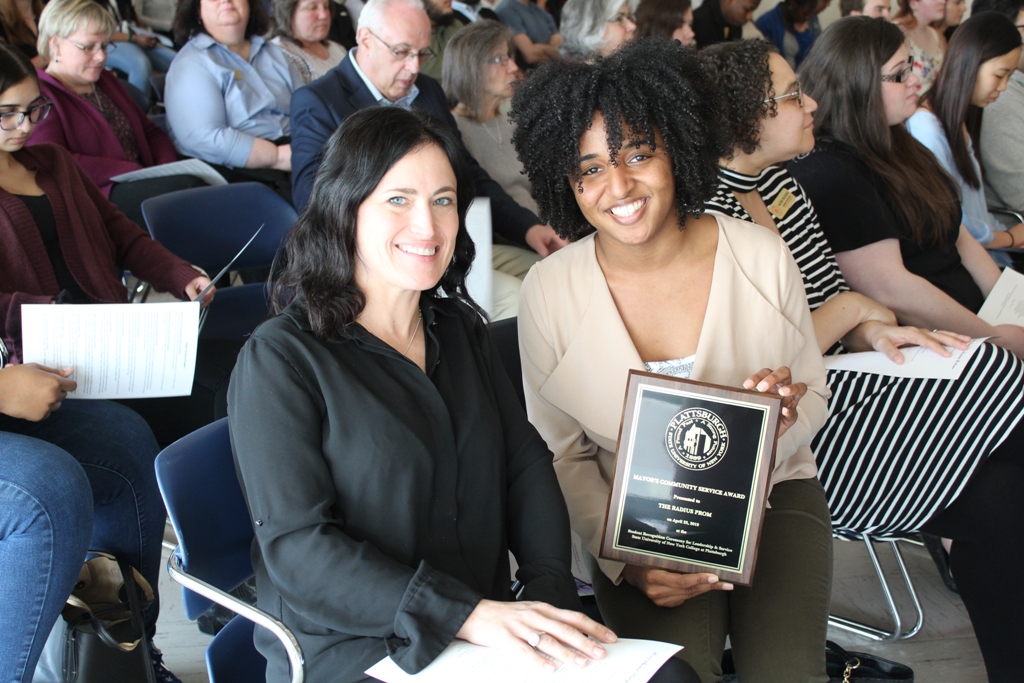 “This year, Mayor Read has chosen to recognize the RADIUM Prom. The mission of RADIUS is to empower, enrich, embrace and promote the experiences of campus and community members across the gender and sexuality spectra through education, awareness, advocacy and resource networking,” Hartman said.

“This prom brought to light the experiences of members of the LGBTQIA+ community who were not able to attend their own high school prom at all or with whom they chose. The event was a huge success,” Hartman said. “In all, 238 students, faculty and staff attended, dressed in their finest prom attire.”

The prom included performances, dancing and the crowning of the prom court.

“Overall, prom was a great way for the campus community to end the academic year having fun together while providing recognition and support for the LGBTQIA+ community at SUNY Plattsburgh,” he said. Zyaijah Nadler, violence prevention education and outreach coordinator with the Title IX office, accepted the award on behalf of RADIUS.

Recognition and awards were given on behalf of Alternative Break Program, Project HELP, Up ‘til Dawn, Relay for Life, the Office of the Vice President for Student Affairs, the Student Association, clubs and organizations, and campus leadership, among many others. The Presidents’ Cup is given on behalf of the presidents of the Student Association and the college, is the “highest honor that can be bestowed upon a recognized group for contributions to campus and greater community,” Hartman said. That award went to Alpha Phi sorority. 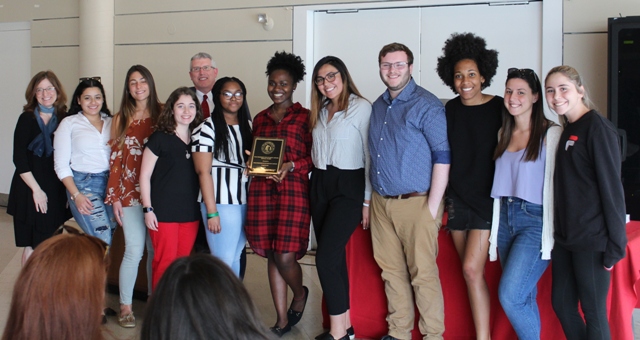 “Although there were many examples of such excellence this year, this afternoon we accord the honor to the Public Relations Campaigns class for its “Committing to Conversation Series.”

Students organized a series of campaigns under the tagline, “Committing to Conversation,” suggesting that in order to make progress on increasing appreciation of diversity, “we must build relationships with those who are different from us.”

Part of the campaign involved 50 faculty, staff and administration members together with students to discuss micro-aggressions and how to do a better job of avoiding them and handling them when they do happen. Michelle Ouellette, assistant professor of public relations, and her students were recognized for their work.

In addition, a number of scholarships were awarded to a variety of students in recognition of a variety of achievements, including excellence in community service, leadership, academics, and student involvement in the life of the college.