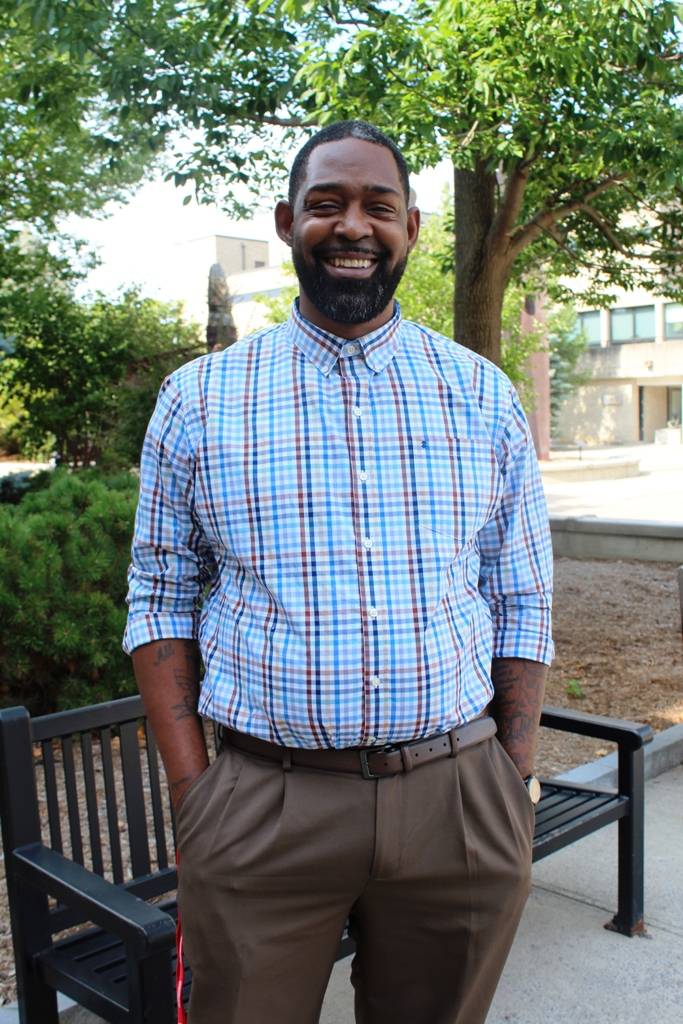 SUNY Plattsburgh’s new multicultural student success coach in the Division of Diversity, Equity and Inclusion knows all about inspiring and motivating students to do their very best.

As a member of the 2005-2008 Cardinal men’s basketball team, Travis Gorham engaged in that kind of coaching every time his size 14 court shoes hit the gym floor.

Although DEI is located in Hawkins Hall, Gorham’s office space in the Community H.U.B. in the Angell College Center gives him more access to the students he’ll be serving and dovetails with his overseeing the H.U.B.’s activities and events.

Gorham, who hails from Bridgeport, Conn., sees himself as not just a success coach for multicultural, BIPOC, LGBTQ-plus students but also an academic adviser, mentor and counselor.

“I want to be an advocate,” he said. “I want students to feel comfortable coming in to talk to me, to tell me what they need, to share with me if they’re having any issues.”

It nearly never happened. Gorham hadn’t planned on getting a degree.

“I had my mind not set on going to college. I planned to do other things,” he said. A star on the high school basketball court, Gorham was wooed by a coach who had seen — and heard of — him and who would eventually work with Gorham both in his home state of Connecticut and his adopted home of Plattsburgh — Coach Tom Curle, now retired and residing in North Carolina.

“I was in high school, and Tom was a coach who was extremely interested in my skills,” Gorham said. Curle was coach at the Division II Teikyo Post (now Post) University in Waterbury, Conn.

“He called my mom; she told me I could either go to school or get out,” he said. “So I went to college.”

Gorham went to Post, but after his freshman year, Curle moved on to coach at Alfred University, which left Gorham feeling out of place.

“I got into a lot of trouble after he left, so I went home.”

Curle moved up to SUNY Plattsburgh in 2003 and again reached out his hand. In 2005, Gorham grabbed hold and didn’t let go.

“I came up here to play in a tournament before being admitted to the school. I saw something in the Plattsburgh area. It was somewhere I could thrive. I didn’t see people running down the street shooting guns; I didn’t see the drug culture. It was the best place to focus on basketball,” Gorham said.

In the fall of 2005, Gorham got on a bus and headed for Plattsburgh and Division III basketball.

“Basketball was always great, but meeting all the people I met on campus — it was an amazing time for me. I’ll never forget those times,” he said. “I had a sense of accomplishment, being a first-generation college student. It meant so much to have my mother up here for graduation.”

Gorham earned his bachelor’s degree in human development and family relations in 2009.

“I was able to achieve my goal. I attribute the hard work and determination to my mom; she pushed me. She knew what it was like to work hard,” he said.

While at SUNY Plattsburgh, Gorham met the woman who would become his wife, Plattsburgh native Amber Musso. They stayed in Plattsburgh, started a family, which would eventually number six children — including a set of twins.

“I was trying to figure out the best career path to follow that would also allow me to focus on helping people,” he said. “I always wanted to be what the male adults in my life — the coaches, teachers, uncles — were to me. I wanted to pay it back.”

After a string of dead-end jobs, Gorham started working with the developmentally disadvantaged through Citizen Advocates and ARC.

“I could actually start to have an impact on peoples’ lives; I could do something good,” he said. When a caseworker position opened with Clinton County Department of Social Services, Gorham began working with area youth who were at risk —of failing school, turning to drugs, already using drugs.

“I worked to help them get back on track,” he said. “I really loved working with families, helping children. They had been traumatized so much and really need help.”

It wasn’t until Gorham was inducted into SUNY Plattsburgh’s Athletic Hall of Fame in April that the path was cleared to return to his alma mater. Dr. Michele Carpentier, director of special programs, assistant vice president for enrollment and student success and someone Gorham calls a mentor, reached out and alerted him to the success coach position.

“I thought about it over the weekend, and when I woke up Monday, I jumped out of bed and said I want this job; I need this job,” he said. “

The multicultural success coach position brought together Gorham’s two passions: helping people and the college that gave him his own sense of accomplishment and success.

“I’ve come full circle,” he said. “It’s all I ever wanted to do — to find a way to mentor, advocate, support and speak up for those who need it. Hopefully, their experiences at Plattsburgh will be like mine, with mentors like Michele, (the late EOP director) Kyla Relaford, Tom Curle, the entire athletics department, the faculty and staff in human and family relations — they all saw something in me.”

Funding to create the multicultural student success coach position was provided by Distinguished Alumnus, Norman Radow '78 through a gift from the Radow Family Foundation to the Plattsburgh College Foundation.

Norman Radow, owner of The Radco Companies, has a long history of philanthropic involvement with the college and supports a history scholarship, business and economics scholarship and the Douglas Skopp Social Justice Scholarship which he established in honor of his mentor, SUNY Distinguished Professor of History Emeritus Douglas Skopp.

Norman's experience growing up in and around public housing projects in Brooklyn inspired his lifelong ambitions to help families to grow up in safer communities and to invest philanthropically in programs, like the multicultural student success coach position, which provide young people with more opportunities.