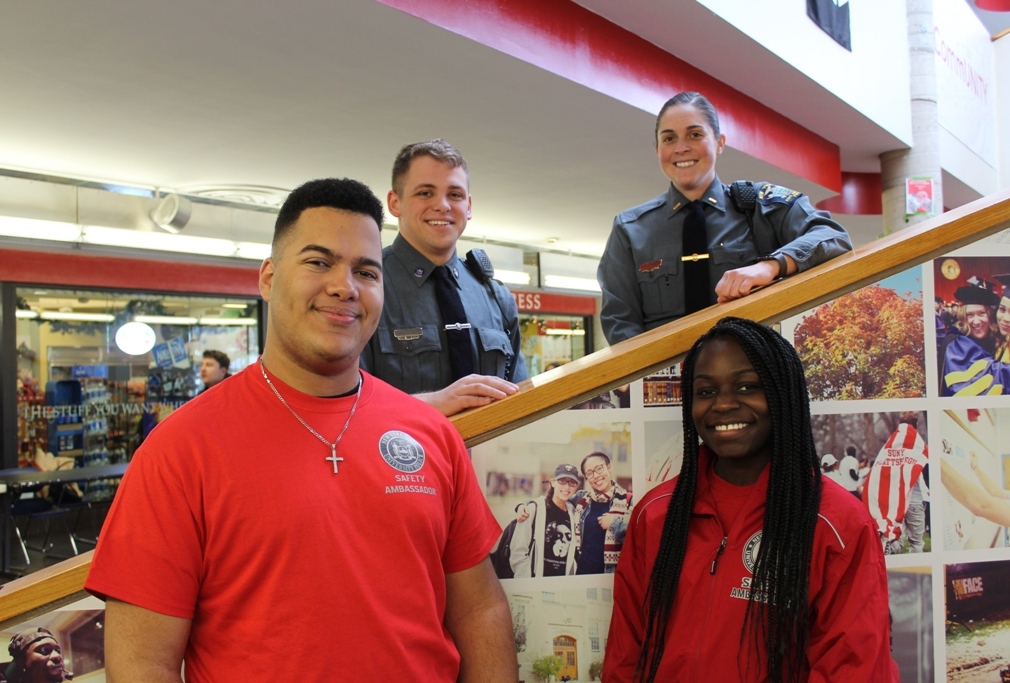 University Police Lt. Jessica Facteau knew when she arrived at SUNY Plattsburgh six years ago that she wanted some kind of student-UP connection beyond that of law enforcement.

“In my mind, I thought it would be nice to have a student liaison with our department who would be close in age to myself,” Facteau said. “That always played in my head: how can I make that happen?”

When the department hired Officer Coty Cowles, who as a student at SUNY Brockport had been part of that school’s student patrol program, he and Facteau discussed how it could work at SUNY Plattsburgh.

The lieutenant approached then-Chief Jerry Lottie to ask how she could get such a program off the ground at SUNY Plattsburgh.

“He liked the idea,” she said. Chief Patrick Rascoe has carried that forward.

“Lt. Facteau and Officer Cowles have worked hard to put together a program that not only supports our students but also provides a mechanism that promotes greater police and student contact,” Rascoe said. 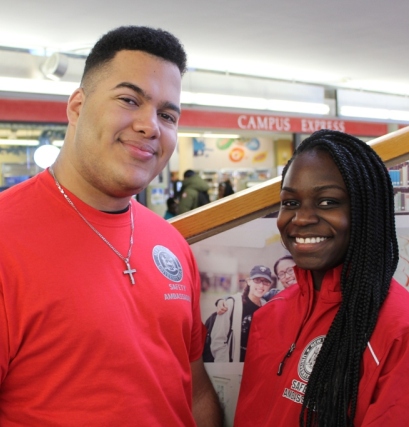 The first student was hired in the spring 2018 semester. Senior accounting major Humberto “Tico” Alvarado began working a few hours a week. It was a good fit.

“Being that I am social and also a student of color, having a safety ambassador that some of my peers can relate to was also a motivator for me to take the job,” Alvarado said. “Everyone who has been introduced to the program thinks is an amazing program; it's essentially extra safety on campus and an extra set of eyes for University Police.”

Facteau felt it was important to launch the program because it serves as a connection between the police and the campus community. It works, “in part by integrating students working directly with the University Police Department, facilitating that peer-to-peer support by fostering safety, communication and education,” she said.

Not only that, she said, it will look good on their resumes.

“They are employees of University Police,” she said. “That was also important to me.”

Sophomore biomedical sciences major Quartey said that presence helps students feel more comfortable about the UP presence. Students find it “easier to talk to us, and we always relay important information back to UP. They are always open for feedback,” she said.

Ambassadors wear red T-shirts and red jackets with the New York State University Police logo and “Safety Ambassador” to identify them to their peers.

“I have them out and about, Facteau said. “They document any incidents, offer safety escorts at night, assist us as directed. They contact us if they see anything out of the ordinary. They are instructed to not get involved but to be the best witnesses.”

“During my shifts, I help escort students back to their dorm and do building walk-throughs to make sure everyone is safe and sound,” Quartey said. She said she explains her job to classmates to get the word out on what they do.

Facteau said she and Cowles, who supervises the day-to-day interaction with the ambassadors, didn’t want to make it sound like these students are out there to enforce the student code of conduct.

“We want them out there to do peer-to-peer mentoring, to say, ‘We’re looking out for you,’” she said. “Students may feel more confident, less intimidated going to a peer.”

For their part, the students have said it’s been a rewarding experience.

“This has probably been the funnest job I’ve had in my college career,” Alvarado said. “I’ve attended multiple events with University Police such as the Relay for Life, events by the LGBTQ club, orientation for incoming freshmen and so much more.

“I know this program gives us a chance to be there for our peers without the pressures they might feel when dealing with an officer,” he said. “I also feel that this program helps to show that University Police at SUNY Plattsburgh is really committed to what they do and that they are amazing people.”

Rascoe said he hopes the program can be expanded in the future “to include student-to-student education and outreach as well as internship possibilities,” Rascoe said. “I would be remiss if I didn’t acknowledge the great work and proof of concept that is being done by our current safety ambassadors, Richeal, Syane and Tico.”