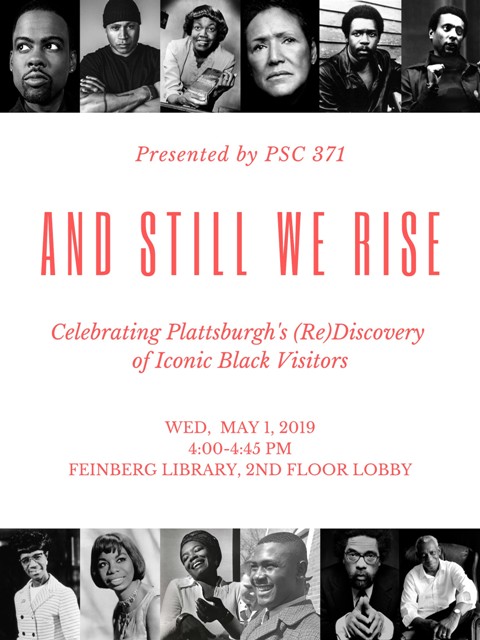 Students in Dr. John McMahon’s African-American political thought class have been uncovering 40 years of black activists, politicians, writers and musicians who have come to campus.

McMahon, an assistant professor who joined the political science faculty in the fall of 2018, proposed the political thought class when he first arrived, something he said he wanted to teach this semester. Upon meeting Associate Librarian Tim Hartnett last fall, the formation of the class started to take shape.

“Tim told me he has created a spreadsheet of all the musicians, politicians, writers, etc., who have come to campus,” McMahon said. He said he couldn’t believe the list of African-Americans who have been to Plattsburgh. “Nina Simone, Kwame Ture, Maya Angelou, LL Cool J, Gwendolyn Brooks, Cornel West, Shirley Chisholm, and more, all spoke or performed on campus in the years from 1960 to 2000.

“That became the project. We’d take what we learned about in class this semester and make it meaningful for the students, the campus and community,” he said.

With the help of Hartnett and others in Feinberg Library, the students have been researching these African-Americans, coming up with details on their visit, from stories written in old Cardinal Points, to photos in yearbooks. 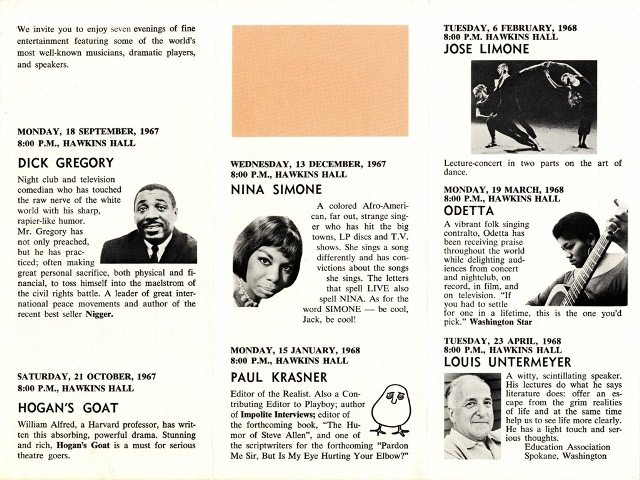 “There wasn’t a lot on Nina Simone’s visit,” McMahon said. “A student found an original brochure announcing her visit, and it was through that brochure that we discovered Odetta, one of the most important black folk musicians, was coming to campus.”

What the students compile in their research will become “And Still We Rise: Celebrating Plattsburgh’s (Re)Discovery of Iconic Black Visitors,” an exhibit to be mounted on the second floor of Feinberg. A public opening will be held there 4-4:45 p.m. Wednesday, May 1.

Hartnett said he, Special Collections Librarian Debra Kimok and Joshua Beatty, digital scholarship librarian, had given the students an introduction to the collections and resources available to them both within and beyond Feinberg Library as well as making themselves available for personal research assistance.

“This is a librarian’s dream project,” Hartnett said. “Students utilizing library collections, resources, and services to create something original that contributes to the public’s awareness of our college’s history. Dr. McMahon has designed a brilliant project for students to explore, discover, synthesize and create something of their own, which gives them a sense of accomplishment, pride and ownership.”

Political science and philosophy major Josh Shaw, a junior from Granville, N.Y., was in one of McMahon’s classes in the fall and “found great value in the way he structured his curriculum,” he said. When he learned about African-American Political Thought, “I figured it would be a course with content that I anticipated would have great appeal to my academic interests.

“One thing that I’ve gained from the class so far is an augmented understanding of the structures, institutions and dynamics that are persistently present and operative in Western society,” Shaw said. “When conducting my own research for this project, I have developed a strong appreciation for the contributions African-American political thought has provided to the discipline of political theory.”

Shaw was particularly impressed with discovering Dr. Cornel West, professor of the practice of public philosophy at Harvard University, addressed the student body in 1998.

“Dr. West gave a speech to all students, emphasizing the need for action in society,” Shaw said. “The words of Dr. West yielded inspiration for many students as they left his speech with the understanding that ‘we are the leaders we have been looking for.’”

‘Couldn’t Wait to Find Out Why and When’

Marie Alcis, a sophomore English major born in Haiti and raised in Brooklyn said that when McMahon told the class about “these phenomenal African-Americans who came to Plattsburgh, I was both shocked and excited to know more at the same time. I couldn’t wait to find out why and when,” she said. “Since I was in high school, I’ve always found the ways in which black people think and view this world to be extremely interesting.”

When the class was suggested by Dr. Tracie Guzzio, professor in English and director of the Honors Program, Alcis said she decided “to give it a try. I enjoy everything and anything that involves understanding the black body.

“So far I’ve learned about so many aspects of blackness that I never got the chance to learn,” she said. “So many black writers — both women and men — feel and think the same way that I do, and Dr. McMahon gave me a chance to explore such intelligent people who look and sound like myself. He gave and continues to give me a platform to express myself and my experiences.”

“I hope this public project will have a real on-campus impact. For me, it is a chance for students to cultivate new skills and to translate what we have been learning in the classroom into something for the campus community as a whole,” McMahon said. “I had very high hopes from the beginning. And students have met my high expectations and excitement level.”

“And Still We Rise” will be on display at the library through August. An online version of the exhibi can be found here. For more information, contact McMahon at 518-564-5831 or [email protected].