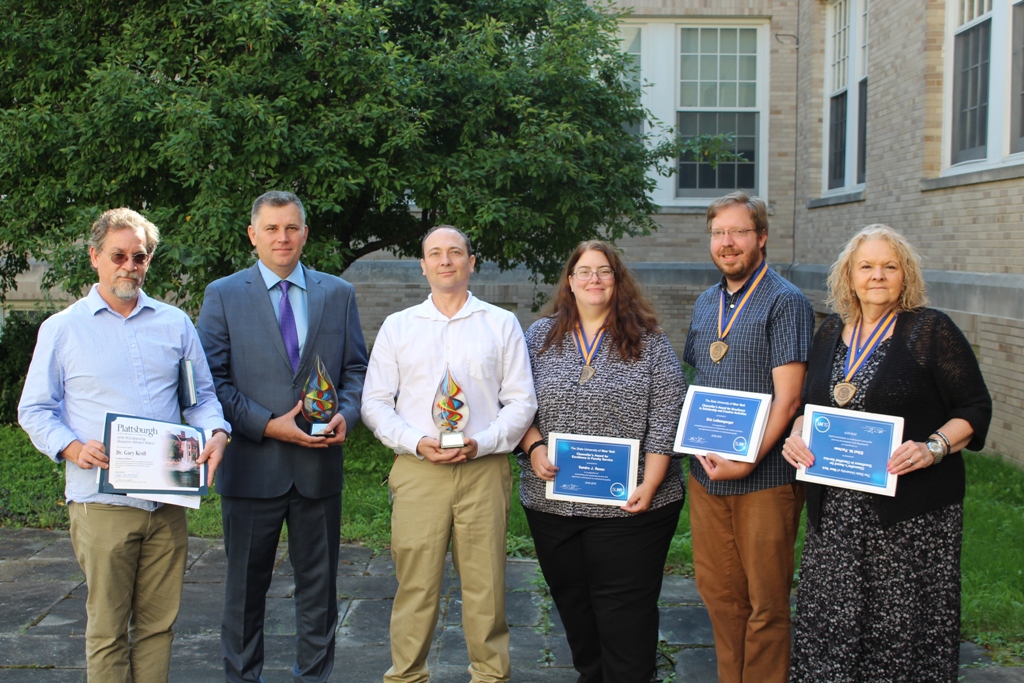 Faculty and staff gathered in Giltz Auditorium Aug. 23 for the annual welcome-back program where seven of their colleagues were recognized for excellence and service.

Hosted by Josee Larochelle, vice president for administration and finance who was named Officer in Charge upon the retirement in June of longtime President John Ettling, the program included distributing medals and certificates to the four faculty and staff members who received the 2019 Chancellor’s Awards for Excellence. The awards were announced earlier in the spring by the SUNY Board of Trustees and Chancellor Kristina Johnson.

On hand Friday to receive their medals were:

Dr. Adrian Carr, an adjunct in the music department who received the Excellence in Adjunct Teaching Award, was unable to attend the program.

In addition, Larochelle surprised Dr. Gary Kroll, professor of history, with the 2018-2019 Outstanding Academic Advisor Award. Nominations are sought during the spring semester for an award that recognizes advisers who have “significantly enhanced advisees’ educational experiences by being readily available for them and demonstrating a genuine interest in and concern for their overall educational experience.”

The Office of Alumni Relations honored Cristian Balan, director of the Center for Cyber Security and Technology and lecturer in management and information systems and analysis, and Frank Bretthauer, campus locksmith, with the 2019 Faculty/Staff Impact Award.