School of Business and Economics Welcomed into Elite Bloomberg Program 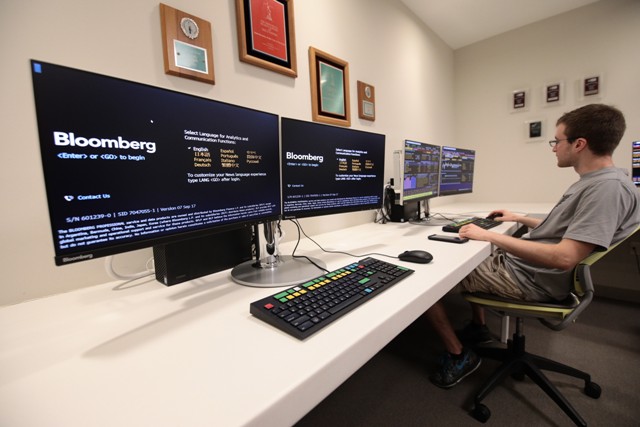 The School of Business and Economics has been awarded membership in the Experiential Learning Partners program of Bloomberg LLP, which will give SUNY Plattsburgh and its students a direct link to the premier provider of financial data in the world.

“Bloomberg terminals are the industry standard in accessing and extracting financial data for investment professionals around the world,” said Dr. Robert Christopherson, chair and professor of economics. “Being an ELP identifies SUNY Plattsburgh as having successfully integrated Bloomberg terminals into our curriculum.”

In order to qualify for the ELP program, SUNY Plattsburgh must have had more than 100 students interact in the course context with data projects supported by downloads from the terminals, said SBE Dean Rowena Ortiz-Walters.

“Last year, more than 100 students in various courses were engaged in exercises and projects, all of which dovetail nicely with the science, technology, engineering and mathematics initiative embraced by the college,” she said. “At the beginning of my SBE deanship, one of my critical priorities was to provide access to the big-data world for SUNY students and faculty. The SBE, with the help of Anne Hansen, vice president for institutional advancement, was able to secure Bloomberg terminal access, and we created a dedicated finance lab where there are four Bloomberg terminals.”

John Conners, a 1975 SUNY Plattsburgh graduate, former member of the Plattsburgh College Foundaton Board of Directors and senior vice president of financial counseling at Ayco, a Goldman Sachs company, knew how beneficial these terminbals would be for Plattsburgh students. He became a catalyst in the success of the campaign, Hansen said.

Conners and his wife, Diana, matched charitable gifts on a dollar-for-dollar basis from SBE alumni and friends over a two-year period.

"They also made additional personal gifts that ultimately enabled the finance lab to be established and operate," she said.

"Bloomberg is cutting edge as a financial resource," Conners said. "Knowing and usig the Bloomberg system will give our students a competitive advantage when they graduate.

"As donors, we wanted to see our contribution have a direct impact. With the help of the development office and business school, this project achieved that."

“Members of the ELP post copies of their finance and accounting syllabi to Bloomberg’s website as an example of how they are currently using Bloomberg terminals in their curriculum,” he said. “Other institutions can then use this information to update and more fully integrate the terminals into their curriculum based on our example.”

The program is elite: SUNY Plattsburgh is the first and to date only SUNY campus to achieve membership. Members hail from England, France, Germany, Italy, Malaysia, Australia, Canada and several colleges in the United States, including Babson College, Bryant University, Providence College, Temple University and the University of Tennessee.

“All program partners will offer their experiential learning protocols that will be accessible to other institutions as a free download,” Ortiz-Walters said. “It is a big accomplishment for SBE.”

“It should serve as a message to potential students that Plattsburgh is a leader in this area and serious about using state-of-the-art technology in its business education,” Christopherson said.