Something terrible has happened.

A gas leak has sickened students. A few are hospitalized in critical condition. And now one of the dorms is on fire. Hundreds of students may be trapped inside.

A major crisis is unfolding, and, as a public relations representative for the college, you’re facing a barrage of questions from emotional parents and the media. What do you do? 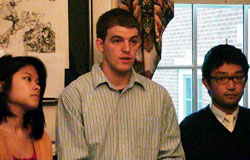 This emergency is, in fact, just a drill, used to introduce the students in SUNY Plattsburgh’s Principles of Public Relations class to the rigors of crisis management.

“This is what gets their attention,” said Colleen Lemza, assistant professor in communications who teaches the course. “It’s become an indoctrination in the PR major.”

As part of the drill, Lemza’s students represent various departments of the college. Testing them are students in the Reporting and News Writing class, who work as journalists in the simulated crisis as it unfolds with breaking developments.

Dylan DeGarmo had his hands full in the role of the college president. While his assistant, Maggie Edwards, scrambled to find out what was going on in other departments, he handled questioning from the would-be reporters and then an even more intense grilling during a news conference. Further complicating the situation were angry questions from emotional parents, played by former students in Lemza’s class.

“The [PR] students had tough questions thrown at them,” DeGarmo said.

Students later evaluate themselves during discussions in their respective classes. In addition, journalism students write a news story about the event. This not only shows the PR students how they came across to the simulated media but also gives them an opportunity to learn from their mistakes.

So while the tragedy itself was simulated, the experience for both PR and journalism students was very real. It's another way that SUNY Plattsburgh faculty make lessons in the classroom come to life. It's also an introduction to what might lie ahead after graduation, according to Lemza.

“This provides the wake-up call that they need to take crisis communications seriously,” Lemza said.