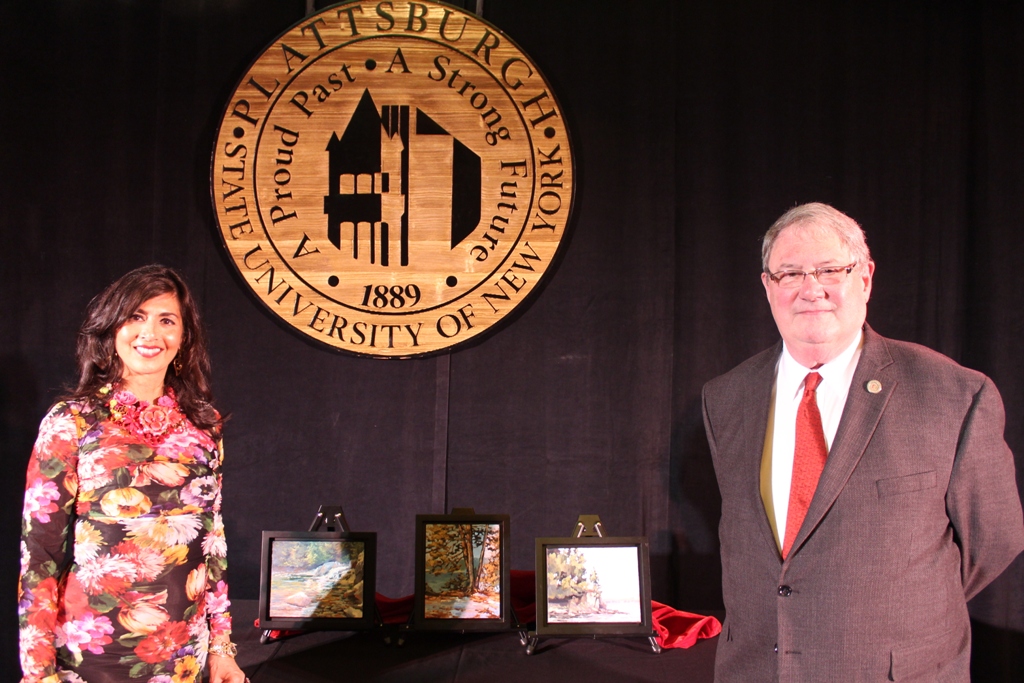 SUNY Plattsburgh President John Ettling and his wife, Lisa Lewis, were feted at a gala event held in their honor on May 3, a special occasion to reflect on the couple’s 15 years of leadership at the college.

Serving as master of ceremonies, Bill Laundry, retired vice president of student affairs, introduced the program of guest speakers, including Dr. Tod Laursen, senior vice chancellor and provost, State University of New York. Laursen praised Ettling and Lewis for their roles in transforming the infrastructure of the college, their part in helping raise more than $16 million for the Plattsburgh College Foundation during the seven-year Bright with Promise campaign, and their work to enhance the art and culture of the campus. 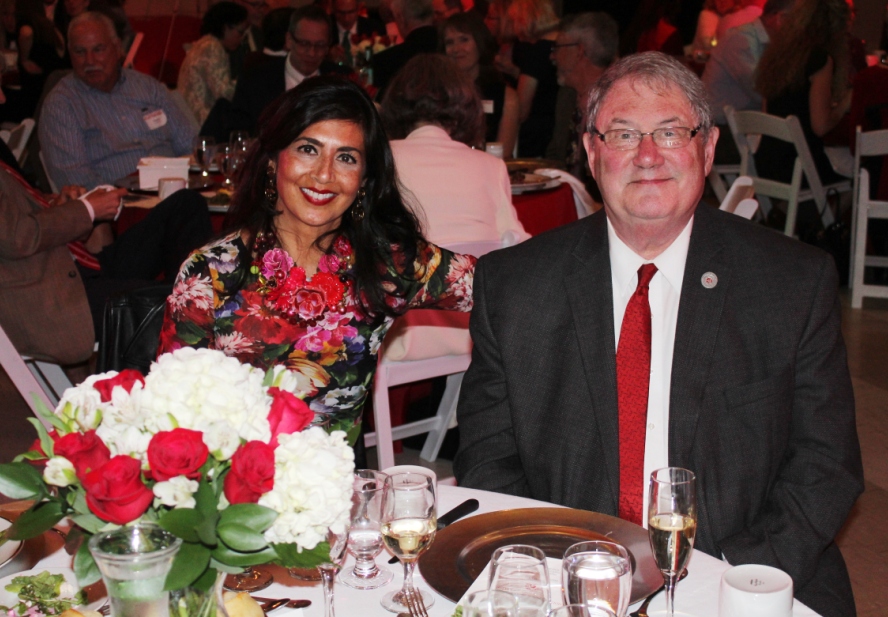 Ettling arrived on campus the spring of 2004 having decided he wanted to live and work here after meeting the faculty and staff.

“I was struck by how dedicated and diligent the faculty and staff here are,” he said for a 2004 Plattsburgh Magazine article. “The people I have met here are incredibly warm and welcoming, and I’ve discovered opportunity abounds.”

Upon her arrival that summer, Lewis embraced her role as First Lady and the couple’s “role as custodians of and recruiters for this public university,” she said at the time.

Both arrived from their respective positions at the University of North Dakota — Grand Forks, where Ettling was provost and vice president for academic affairs, and Lewis taught in the English department and Honors Program. Once in Plattsburgh, Lewis quickly established herself in the art community, becoming honorary chair of Friends of Art, which sponsors events at the Plattsburgh State Art Museum every semester.

On Friday, while guests dined, Laundry brought other speakers to the dais to talk about the impact the couple had on their lives, on the community and on the campus, including Mayor Colin Read and state Assemblyman Billy Jones, who read a proclamation from the state Assembly and thanked him for all he’s done “for this community, the college and the student body.”

“He is a president who really cares about place and gets the significance of it,” Read said. “He always does the right thing for the right reasons. We are richer for his and Lisa’s presence.” 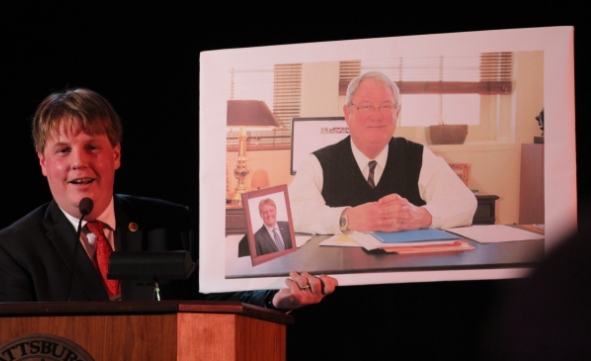 Michael Cashman, supervisor of the Town of Plattsburgh, took the podium, telling those gathered that he has had with Ettling “that expands his complete tenure on campus.

“You are a unique and special person to me,” Cashman said, choking up a bit. “When Dr. Ettling came on campus, embraced change and embraced ways to serve the students. I had the good fortune of serving as Student Association president when he first came here.”

He and the president swapped roles for a day, with Ettling taking over as president of the SA, Cashman taking off the 159 Hawkins Hall. “That was the beginning of my understanding that he truly, was in this to make a difference.”

Over the decade and a half Ettling has led the college, he has instituted approaches, ushered in new programs, and contributed to the overall betterment of the college in myriad ways. Since 2004, he:

The Warren Ballrooms were decorated in chandeliers and formal place settings for the occasion with jazz music by the Wickmoore Jazz Trio — students Nelson and Eli Moore and alum Vihan Wickramasinghe — playing in the background during a cocktail reception to start things off.

“In the 15-year tenure of John and Lisa, the endowment grew from $9.5 million to more than $20 million in new gifts and pledges,” MaGaw said.

While numbers are important, what is important to also note is that “John and Lisa believe in this place, in the students, faculty, staff,” she said. “They listen, and they care. Trust is what you exemplify. You have increased the coffers of the organization, and you have enriched our lives.”

Dr. Karen Blough, interim director of the Plattsburgh State Art Museum, extoled Lewis’ commitment to the college through her work not just in the art world, but her “many and multifaceted cultural contributions, logging literally thousands of miles of travel on behalf of the college, meeting with alumni and benefactors.

As keynote speaker, Distinguished Service Professor Emeritus E. Thomas Moran said Ettling’s leadership “was precisely what we needed. His personal qualities mirrored and affirmed who we are as a community: unpretentious, civil, welcoming, reasonable, and deeply engaged with students.

“There is a kind of quietude to John’s leadership. He is never bombastic, pompous or self-important. He is truthful and does not disassemble,” Moran said. “After 15 years of his leadership, we are a college with our values still clear and intact, a campus that is more diverse and open to the world, with new buildings above ground and our foundations underneath us still sturdy and ready for the future.”

“Some years ago, I’d heard of several kind things that John had evidently done in reaching out to faculty members, some of whom faced serious illnesses and other similar difficulties. I commented to him that what he had done was kind. He waved me off and said, ‘No, I’m not kind. Lisa is kind.’ I later learned those kindnesses had, in fact, originated with Lisa.

“That hardly surprised me. I’ve long been impressed by the warm and gracious way she greets members of the college community and her thoughtful attention to students in numerous settings, especially at receptions at their home, where she reaches out to them and makes them feel known and appreciated.”

Upon hearing of the death of retired Provost and Vice President for Academic Affairs Bob Golden, Moran said Ettling told him, “I owed Bob a lot.” 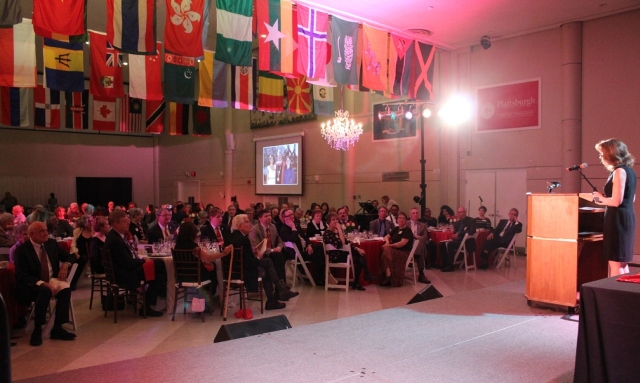 In an emotional tribute, Anne Hansen, vice president for institutional advancement, thanked Ettling and Lewis, saying, “I am so blessed to have spent the past 13 years working with you to advance this college.

"Your kindness, humor and deep commitment to this place and our students made our work together a joy, and I am going to miss you.”

Lewis thanked guests and members of the community for their continued support over 15 years, calling out friends such as Angela Brown for her musical “salons” in Saranac, part of the Hill and Hollow Music series, and many others who helped make Plattsburgh her home. 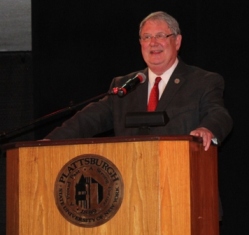 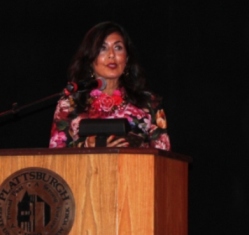 Ettling echoed his wife’s appreciation and thanked those gathered at the gala in their honor.

“It feels a bit like Tom Sawyer attending his own funeral when everyone thought he was dead. He got to hear all the kind things they had to say about him,” Ettling said. “Lisa and I thank you.”

Special attention was also paid to a meditation garden set to be constructed in their honor in the north courtyard of Hawkins Hall.

“We are raising $100,000 to create the Lisa Lewis and John Ettling Garden,” Hansen said. “It is the vision of Lisa and John that this garden be a quiet, restorative space for reflection. It will be free from technology, conversation and the hustle and bustle of life.”

Two members of the foundation Board of Directors will match, dollar for dollar, up to $50,000 in gifts to the project received before June 30, 2019.

“We are also establishing an endowment to ensure that Lisa and John’s garden will be maintained in perpetuity for future generations to enjoy.”

To learn more or to make a gift, visit https://alumni.plattsburgh.edu/garden.

Laundry wrapped up the evening by thanking Ettling and Lewis “for being with us these 15 years. These are two people who understood, who got what SUNY Plattsburgh is all about. I for one, along with a lot of others, appreciate it.” 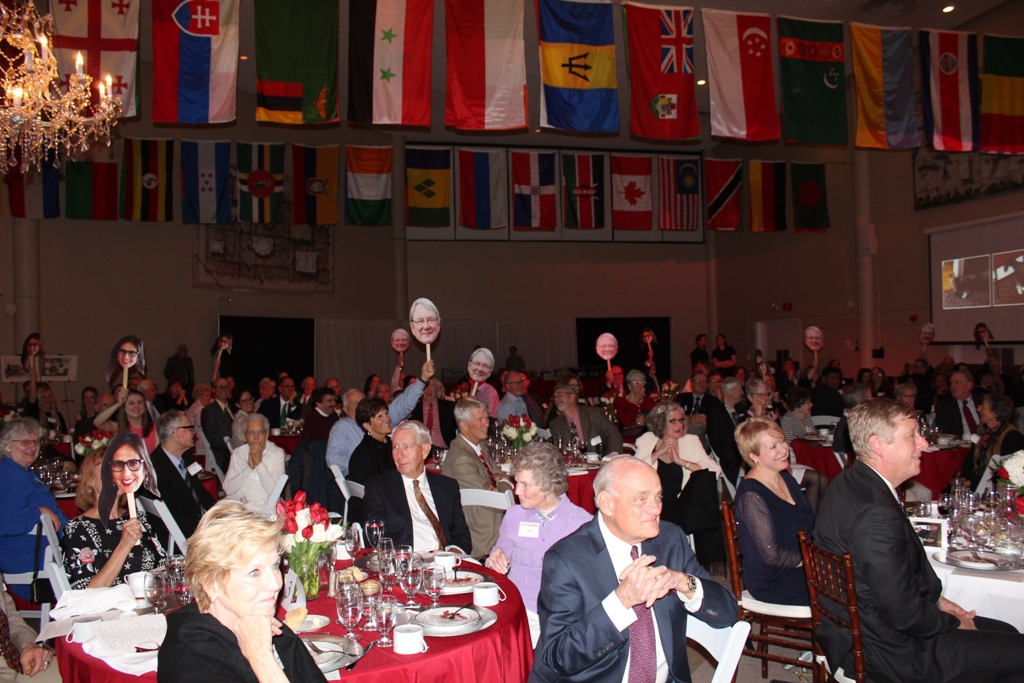