‘Next Generation’ Bluegrass Program to Pay for Students’ Attendance at Festival 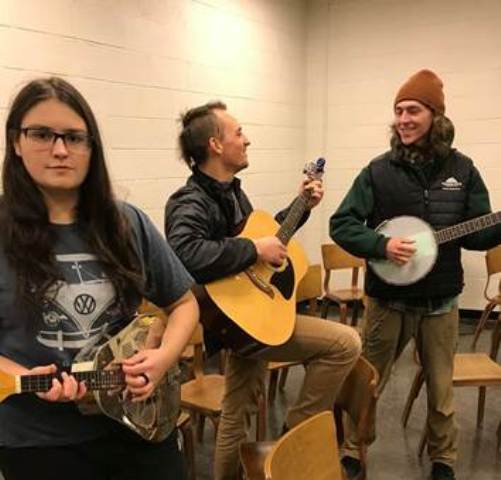 Bluegrass for the Next Generation, SUNY Plattsburgh’s program designed to encourage in students a lifelong interest in the musical genre, is sponsoring a free student trip to one of the largest bluegrass music festivals in the United States.

The program is picking up the cost for students in the introduction to bluegrass music course, current and former winners of the bluegrass scholarship and any SUNY Plattsburgh student who is interested in learning more about bluegrass music to attend the Joe Val Bluegrass Festival in Framingham, Mass., Feb. 16 and 17.

The festival is named after the late Joe “Val” Valiante, “a prominent bluegrass musician and bandleader in the Boston area,” said Dr. Stephen Light, professor of sociology and coordinator of the bluegrass program who also happens to be a semi-professional banjo player. Light said the hallways and meeting rooms of the Sheraton serve as performance sites “and the ballroom becomes a huge concert hall.” And SUNY Plattsburgh’s BGNG program has been sending students for the past five years.

“Students attend bluegrass band performances, meet professional and amateur bluegrass musicians, become more familiar with bluegrass instruments and network with students and other bluegrass enthusiasts,” Light said. “Students are encouraged to bring their instruments and participate in jam sessions that often last far into the night.”

Some of the students who will be attending, like Sam Gibney, are members of the SUNY Plattsburgh student bluegrass band, the Cardinal Pickers, directed by adjunct faculty member Tom Venne, who , along with Light, is a member of the band, Beartracks.

Gibney, a senior expeditionary studies major from Selkirk, N.Y., became interested in bluegrass the summer before his freshman year when he attended the Grey Fox Bluegrass Festival on a farm in Oak Hill, N.Y. He loved how the music spoke to both an older crowd, content to listen to music from their lawn chairs, and the younger crowd who spent the festival “stomping, kicking, hooting and hollering away to the many energizing, high velocity bluegrass bands present.”

Gibney has been playing percussion and drums since fifth grade but started playing the guitar with regularity that summer he discovered bluegrass and joined the Pickers fall of 2017. 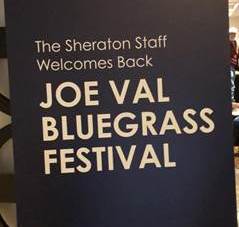 “I first heard about the Joe Val Bluegrass Festival when I was a student in (Light’s) intro to bluegrass class,” Gibney said. “My initial reaction was that it was an insane opportunity not to be missed and if anything, it was a shame more students were not aware of it.”

‘It Was the Music’

Already familiar with the foot-stompin’, hootin’ and hollerin’ experience at Grey Fox, Gibney wondered how that would translate into the halls, meeting rooms and ballroom of the Framingham Sheraton.

“Turns out it wasn’t just the sun, the farm and the stream encircling it all that made me fall in love (with bluegrass),” he said. “It was the music, the people, the open jam sessions, the workshops, the legends, and the families who came together under one roof to create and enjoy the festivities all day and all night long.”

Light, who will be attending and who has performed at the Joe Val Bluegrass Festival, said that for many, “the trip provides an opportunity to hear in a live setting the music that they have been learning about in the introduction to bluegrass music course that is offered every spring semester by BGNG.”

A recipient of one of the Kelley and Shannon Gibson Bluegrass Scholarships, named for the parents of SUNY Plattsburgh alumni and award-winning bluegrass performers Eric and Leigh Gibson — The Gibson Brothers, Gibney said the scholarship has “opened a door for me into bluegrass performance and the local bluegrass community,” Gibney said. “The scholarship provides an opportunity to learn more about the music, improve personal instrumental, vocal and performance.”

Light said the scholarship is awarded to up to three students each year and provides up to $625 for four semesters, applied to SUNY Plattsburgh tuition. Applications for the scholarship are now being accepted at https://www.plattsburgh.edu/_documents/programs/gibson-bluegrass-scholarship-application-2019-2020.pdf.

“One important aspect of the scholarship is that it requires involvement and encourages taking on a leadership role in the Bluegrass Club on campus,” Gibney said. “This is an opportunity to take what we learn in class and in performance and share it with our peers in weekly jam sessions, organize events and performances and spread the music further into our campus community.”

Jam sessions will be part of the order of the day, and night, at the Joe Val Festival, Gibney said.

“The music never stops,” he said.

The Bluegrass for the Next Generation program at SUNY Plattsburgh is made possible by a donation from an anonymous donor.