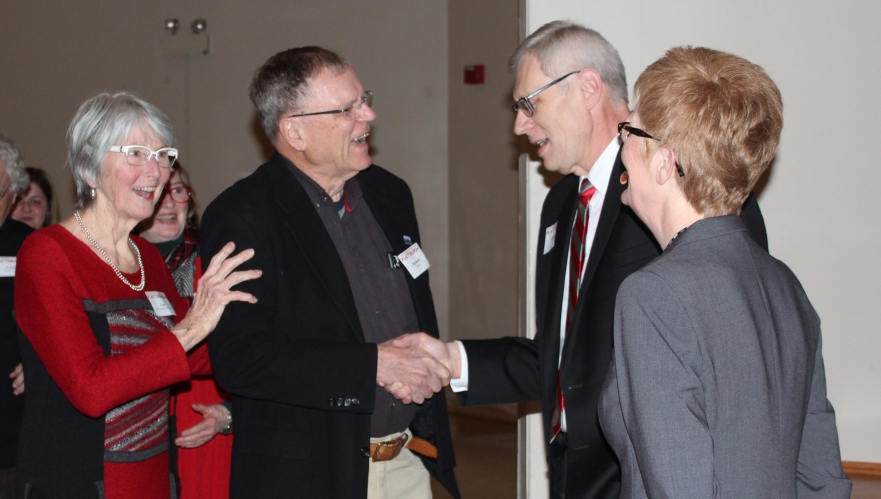 Enyedi, a veteran academic leader, administrator and scholar, was named to the presidency in November 2019 by the State University of New York Board of Trustees. He began on Jan. 21, succeeding Dr. John Ettling, who retired in June 2019 after 15 years at the helm.

The receptions, held in the ballrooms named for the college’s 8th president and his wife, Dr. Charles and Nancy Warren, introduced Enyedi and his wife, Andrea, to faculty, staff, alumni and community members.

“Our alumni are eager to support you,” said Gambino, a member of the Class of 2004. “I hope you feel the awe and excitement now that I still feel coming to campus each day.”

Kirleis told Enyedi, “We’re so happy to have you here and welcome you as the 11th president of SUNY Plattsburgh.”

Mannix relayed a story from the eve of Enyedi’s appointment by the SUNY Board of Trustees.

“One of the most senior trustees said to me, ‘I’ve been here longer than anyone else; I’ve seen people come and go. You are getting one of the best.’”

Dr. Raymond Carman, associate professor, political science, was impressed that when interviewing in September, the president “came to Plattsburgh days ahead of his interviews. He did so, on his own time, to gain a better understanding of SUNY Plattsburgh — who we are, what our strengths are and where our opportunities lie,” Carman said.

“In a time of uncertainty and change in higher education, I am confident that the curiosity, dedication and thoroughness that Dr. Enyedi has already demonstrated will serve our campus well as he leads us in this new decade,” he said.

Dr. Michelle Cromwell, vice president for diversity, equity and inclusion, said that she has been impressed “because he talks about equity.”

“Any president who has equity as a part of their main language means this work of inclusive excellence is in good hands,” she said. “And our president is our chief diversity officer. When we have this from the top down, it says we’re in good hands.”

Dr. Gary Kroll, chair of the SUNY Plattsburgh Faculty Senate and a history professor, agreed, saying that of all the president’s assets, “the most inspiring is his desire to be at Plattsburgh.”

“He already knows more about this campus than many of us, and I look forward to working with him to help Plattsburgh turn the corner,” Kroll said. “It’s hard to overstate the importance of this moment in Plattsburgh’s history. Public higher education is facing its greatest challenge; I have confidence he can help us pull in the same direction.”

Before assuming the presidency at SUNY Plattsburgh, Enyedi served from 2015 to 2020 as provost and vice president for academic affairs at Humboldt State University in Arcata, Calif. There he was responsible for three academic colleges, the Office of Diversity, Equity and Inclusion, and the Office for Research and Sponsored Programs, among others areas. He positioned academic affairs as a role model for related campus-wide activities, championing equity on campus.

“He manages to be both calm and enthusiastic, which inspires a lot of confidence in his ability to move the campus forward,” said Dr. Wendy Gordon, presiding officer of the faculty and chair of the history department. “I’m looking forward to working with him.”

Enyedi, who first heard about SUNY Plattsburgh from his lab partner at Penn State — a member of the Class of 1983 — thanked the faculty, staff and community who have, “to a person, shared with him how special the college was.

“Your support, your engagement, your commitment to the college is important to me, but most importantly, this is truly critical to the success of our students,” he said. “I had the chance to connect with a long-time faculty member. I asked what was the most satisfying aspect of this person’s career here. And the faculty member said, ‘Helping students’ dreams come true.’ We do that — as educators, members of the community, supporters of the community. He help students’ dreams come true.”

Prior to Humboldt, Enyedi had a 22-year career at Western Michigan University in Kalamazoo, Mich. His last five years there were as dean of the College of Arts and Sciences.

Rising through the ranks from his 1993 appointment as an assistant professor in biology, Enyedi was promoted to full professor in 2002 and then named associate dean of arts and sciences in 2005 and dean in 2010.

Born in Canada, Enyedi earned both his master and bachelor of science degrees from the University of Guelph in Ontario, Canada. He earned his doctorate in plant pathology/biochemistry from the Pennsylvania State University and was awarded a post-doctoral fellowship at the Center for Agricultural Biotechnology at Rutgers University in New Jersey.