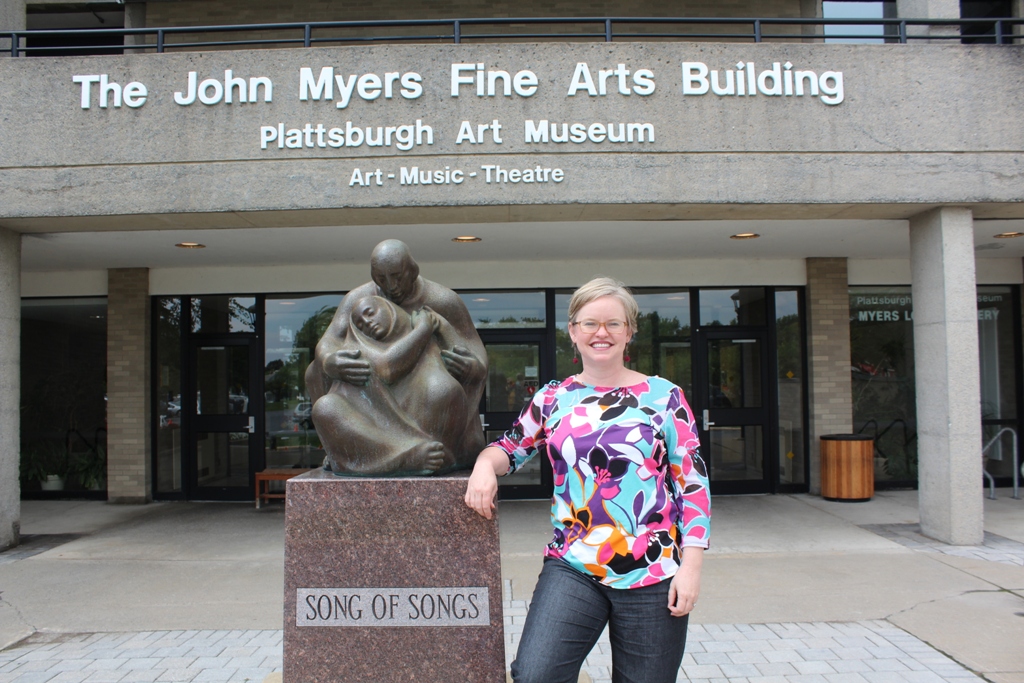 The future of the Plattsburgh State Art Museum is in interdisciplinary cooperation, says its new director.

Tonya Cribb, who arrived on campus in June from the Stetson University Homer and Dolly Hand Art Center in Deland, Fla., looks at the art museum as “a pearl in the crown of the college.”

“We have a multi-million-dollar collection here,” she said. “This is an academic museum. I want to reinvigorate it; I want to engage with faculty and staff, to plan programs and exhibits that are multidisciplinary and cross-curricular.”

Cribb discusses the upcoming “Visions of Place: Complex Geographies in Contemporary Israeli Art” exhibit opening Aug. 26 in the Burke Gallery and Slatkin Study Room, saying it’s a perfect example of how the museum can be incorporated into coursework from programs across campus.

“Throughout the ‘Visions’ show, the artists have portrayed opinions on Israeli life from the left, the middle and the right,” Cribb said. “It accurately reflects expressions of the artists as they experience it. Anyone from history can connect to it; political science can connect to it. The English department can use the show in writing projects. There are a lot of opportunities for discussion. The show is being held in conjunction with the Jewish studies program, and that will help us connect with the Jewish community.”

Another example on campus is the Rockwell Kent Gallery. Cribb said more should be done to promote “such an important and world-class collection.”

“Rockwell Kent is part of the American art history cannon,” she said. “He is such a well-known American artist who made a huge impact on the world. He is very well-regarded. And his work isn’t just paintings. He was a writer, a textile designer; he designed housewares, he illustrated books.

“Kent did a lot of art. He did work he wanted to do and work he was paid to do. He had opinions on the world and how the world should work. These are multiple issues we should be talking about.”

A native of Rock Hill, S.C., she took over the art museum directorship from Dr. Karen Blough, art professor, who had been named interim director in February 2017. Cribb earned her BFA in ceramics from Winthrop University in Rock Hill before earning her master’s in museum science from Texas Tech University in Lubbock, Texas.

“I thought I was going to graduate with that degree and be a potter in South Carolina, but two years before I graduated, I started work in galleries on campus. That changed the trajectory of my career,” she said. “I started getting interested in museums. I did art sales for three years before going back to grad school.”

She worked for two artists who had a gallery where she learned about the business side of art.

“Business is important, but I really liked the educational aspect. I didn’t see myself as a teacher, but I wanted to do education and started thinking museum education — the creativity of museum education. I felt I could do it. There is a lot of creativity in the process of coming up with programs, working for different age groups.”

At the Hand Art Center, Cribb was responsible for oversight and management of Stetson University’s permanent collection, organizing and executing the yearly exhibit schedule and associated educational programming, managing and mentoring the staff, which included eight to 10 students each semester and collaborating with university departments and faculty members to develop resources for use in Stetson courses, something she is poised to do here.

She has taught art history, arts management, gallery practices, docent and studio courses on the college level. It only fuels her interest in bringing the academic and art worlds together.

“We should be able to connect with departments all across campus,” she said. “We should market it. Having art touches every aspect of life.”

Not interested in what she called “vanity shows,” Cribb said the art “should set an example. Students should see quality work in a variety of media. If you had a show on the beauty of the Adirondacks, it shouldn’t just be about the beauty of the Adirondacks,” she said. “It should look at the other aspects and issue of the Adirondacks — the environment, the economy, the policies and politics, for example. A show should be a part of educational outreach that highlights a multidisciplinary approach. Talk about the reasons why the artist did what he or she did; there are layers to artwork, and our faculty can use those layers in their programs.”