Learning the Nuts and Bolts of Field Work in Physics

Nathan Miller, a senior in the Physics program, has employed the ingenuity and scavenging skills of his Physics professors to his own educational ends. 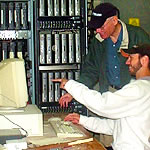 Looking for an empirical research project that might interest him, Nathan found out that Dr. John Lewis, one of his Physics professors, and John Porter, a fellow student at the time, had gotten permission to use an abandoned TV satellite dish to record solar radiation emissions and that someone was needed to record the readings - daily.

Nate signed on for the project and, every day for six months, Nate descended to the dusty depths of Sibley Hall's basement in order to collect data for his undergraduate research paper: Solar and Atmospheric Radiation observations at 3980 MHz.

After months of happy, if poorly lit, hours underground collecting solar-emission data recorded on a discarded computer, its wiring strung from the ceiling by twine, Nate said that he learned some valuable things:

"I learned how to sort through endless raw datat to find the kernels of important information; how to write a meaningful scientific research report and how to confer with others in the scientific community on a research project."

He could not resist adding that he also acquired information how to "eliminate basement-related dust and detritus from a computer keyboard!"

To learn more about the Physics program at Plattsburgh State, please contact: