Stubbornness is a character trait that has served Matt Updike well.

When he graduated from SUNY Plattsburgh's environmental science program in 1995, he didn't go the graduate school route or shotgun his resume out to environmental firms or government agencies. The career, whatever it might end up being, would wait. In spite of convention, he followed his ambition to earn enough money that summer waiting tables in Skaneateles, N.Y., to head west. What he expected when he got there he had no idea. He just knew it was something he had to do. 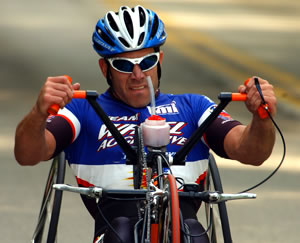 "I had a plan to do this well before I ever graduated," Updike said. "So, in early October of '95 I packed up the car and drove to Utah."

Updike worked at Alta ski area "and skied 120 days that year. It was awesome." He spent a year there before moving to Denver, Colo. It was in Denver in 1997 that Updike's life was turned upside down when the truck he was driving left the road and struck a tree. He had fallen asleep at the wheel.

"My truck rolled several times (and) I was knocked unconscious so the whole thing is a little fuzzy," he said. "I broke my spine and was paralyzed just below the chest. I also bruised and broke all of my ribs and punctured a lung. I was very lucky to have lived."

Surgery on his back shortly followed, and he was transferred to Craig Hospital in Denver for rehab where he spent the next two and a half months "essentially learning how to live again," Updike said. While in rehab, he discovered he could still do many of the things he loved, "such as skiing and cycling," he said. "I met a guy who organized a group of handcyclists to do a bike tour here in Colorado, a week-long supported recreational ride that takes a route through the Rocky Mountains, covering distances like 50 and 100 miles a day and climbing several thousand feet over mountain passes."

Taking a Ride, a Chance

Updike was asked to participate in the ride the following June and agreed.

"This would be only eight months after the accident," he said. "I bought a handcycle - which didn't arrive until six weeks before the ride - and completed the ride. I knew I had found a sport I loved. This gave me something to focus on other than being disabled and was a big part of my recovery."

Racing soon became a big part of his life, too, in 2002 Updike did well enough to make the U.S. Handcycling Team and participate in the world championships in Germany.

"I ended up getting the bronze in the time trial," he said. "I have won several national titles since and have continued to race in Europe at least once per year since then. I missed qualifying for the last Paralympics in Greece by one spot. I'll probably give it another shot in 2008 depending on what is going on in my life."

When he's not racing on his handcycle, on the slopes or cross-country circuits, Updike works at a small chemical company, Five Star Chemicals, which sells cleaning and sanitizing chemicals to breweries. His work keeps him busy, but just like everything else in his 34-year-life, Updike just takes it all in stride.