For Jim Brown G'92, teaching is all about helping students find those "aha" moments.

Perhaps that is why Brown, an alumnus of SUNY Plattsburgh's teacher education program and a sixth-grade teacher at Sand Creek Middle School in Colonie, N.Y., was one of only 80 teachers nationwide to receive the annual Presidential Award for Excellence in Mathematics and Science Teaching this year.

At the ceremony, President Barack Obama credited the award winners with doing more than just training a new generation of workers. He told them that a good education is about instilling "in a young person a love of learning and a sense of possibility in their own lives, an understanding of the world around them that will serve them no matter what they do. That's what we have to do as a nation. That's what all of you do every day." 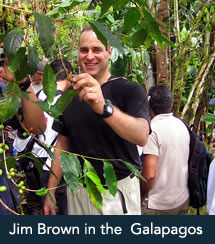 Instilling a Love of Learning

In order to instill that love, Brown guides his students to their own discoveries, helping them find those "aha" moments. For instance, he and his fellow teachers once discovered that their students were getting questions about pi wrong on standardized tests, despite having reviewed the concept numerous times. As a result, he gave his students bicycle wheels of various sizes and had them measure the circumference and the diameter, entering the values into a spreadsheet. The last column on the spreadsheet compared the ratio between the two.

"It wasn't labeled," he said. "And I didn't tell them what it was, but I knew it would happen eventually – and eventually it did. Somebody said, 'Hey, all of the numbers are three point something.'"

Brown also makes a point of saying "yes" to his students.

"A lot of times kids are told 'no,' and a lot of times 'no' does not mean 'No, you can't do it,' but 'No, from an adult's perspective, that's not practical. Don't waste your time,'" said Brown. "But I think a lot of times that's where the learning takes place."

This sort of work has led Brown's students to embark on a number of successful projects, including building a soap box derby car that made it to a national competition; writing and receiving a grant for the school to install electronic handless water faucets to prevent students from wasting water; and starting bicycle recycling programs.

The Use of Tools to Teach Concepts

Brown credits his experience at SUNY Plattsburgh for changing the way he understood and now teaches math. One of his professors taught him to use tools or manipulatives to explain the concepts behind mathematical equations. This is something that isn't generally done with students beyond the primary grades but something that his professor believed was important.

To teach the importance of these tools, that professor asked his students to solve the Pythagorean Theorem using squares. This forced Brown to understand the concepts behind the theorem in a way that he never had before.

"Until I went to learn about teaching math, I couldn't explain the concept to anybody," said Brown, who now makes a point of using such manipulatives whenever possible.

"Jim is a consummate professional," said David Perry, Sand Creek Middle School principal. "Someone who you would want teaching your own children. He comes to school with an energy and passion every day and instills it in his students and the other professionals in the building. It is infectious."

"SUNY Plattsburgh was originally founded to train teachers," said Dr. Nancy Zimpher, State University of New York chancellor. "Jim Brown's outstanding work as an educator exemplifies how the college continues to fulfill that mission. We are tremendously proud of him and of all SUNY alumni who devote their careers to making a difference in the lives of children."

For more information about the teacher education program at SUNY Plattsburgh, please contact: