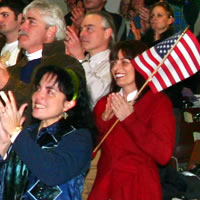 Hundreds of SUNY Plattsburgh faculty, staff and students joined with community members to take part in the inaugural ceremonies and perform a community service at the same time. An estimated 350 people gathered in Yokum Hall where they watched the event live.

They clapped. They cheered. They used noise makers. They gave standing ovations. And they donated.

"When the room started filling up, that's when I really got excited. When the money started coming and the food pouring in, that was really cool too," said Holly Heller-Ross, interim associate dean of library and information services and one of the event's organizers.

By the end of the festivities, the food collection boxes were overflowing and $240 had been collected for the Interfaith Food Shelf and JCEO's Food Pantry.

Before the ceremony, Dr. Elizabeth Bernat, assistant director of academic advising, gave a warm welcome and an overview of the events. She also led a discussion after the ceremony, inviting people to share their thoughts and feelings, and she thanked community member Marti Martin and the organizing committee for putting the event together.

While members of the Plattsburgh community were gearing up for the celebration here, Associate Director of Public Relations and Publications Michelle Ouellette was waiting in line on the mall in Washington, D.C.

"The crowds were shoulder to shoulder, belly to back," said Ouellette. "And thousands of people with tickets, who had stood in these lines for four or more hours were turned away at the gates," she added. "I spoke to people who had to listen to the ceremony over someone else's iPod while standing in one of these crowds.

"It really says something about the good will of the people in attendance that there wasn't rioting, that no one was hurt and that there were no stampedes. Had the crowd been different, news stories from the event would carry a much different tone," Ouellette said.

As it was, she and her husband were able to make it into the silver section only because someone in the crowd had torn down a barrier.

"You'd think it would have been mass chaos at that point - a dangerous, mad dash to the mall. But it wasn't. People were polite and courteous as they made their way to the center of the mall, unchecked by security," said Ouellette.

"The rest was beautiful," said Ouellette. "People dancing, hugging, cheering and helping one another. The way the crowd acted gives me hope for the future of our country."

The View from the Yellow Section

SUNY Plattsburgh Alumnus Ryan McLaughlin '08 also saw the event, first-hand, from the yellow section a little further back. McLaughlin, who now lives in D.C. and works at D.C. Charter Health Care, two blocks from the Capitol, arrived at around 6:30 a.m. and had no trouble getting to his spot on the mall.

"We kind of had a view," he said. "It was not the best view. But we took it for the experience and overall atmosphere."

For McLaughlin, the event actually started on Sunday at 7 a.m. when he went to the Lincoln Monument to attend the 2:30 p.m. concert there. He was amazed at the number of people coming in.

"I met people from other countries, London and France. This inauguration has a global impact. It doesn't just affect the United States but our relations worldwide," he said.

SUNY Plattsburgh's mission is, in part, to provide all students with a commitment to "responsible citizenship within a global community." The college is proud of its efforts to enhance interest and participation in American democracy and civic and community service. Such efforts include those of the Institute for Ethics in Public Life, the American Democracy Project and the Center for Student Involvement.