Mortimer of Macdonough and Other Haunted Tales of SUNY Plattsburgh

In Macdonough Hall alone, there are the toilets that flush in the night when no one’s around; the radios that turn themselves on; the eyes staring out of dark storage rooms; doors that unlock themselves; and the bathroom lights that flicker on and off.

Some of these stories may be traced to a time before the residence hall even existed, according to college historian and professor emeritus Doug Skopp.

Macdonough was built on marshland that had to be drained and excavated before the building could be erected. While that work was being done, a bulldozer operator unearthed bones and two head stones 12 feet below ground. One stone was in such bad shape that its inscription could not be read. The other stone was mostly legible.

According to a Press-Republican article from June 1949, “… enough remained of the legible stone to permit workmen to decipher it as having been on the grave of the ‘wife of Benj. (the last name appeared to be Vaughn) and daughter of Nathan and Rosann Averill. Died Dec. 12, 1812, age 47 years.’”

The article went onto say that a local historian “identified Mrs. Benjamin Vaughn as the first white woman to come to the city.” Meanwhile, Benjamin Vaughn was known for erecting the home of state Chancellor James Kent. That house stands today as the Kent-Delord House museum.

The stones and a single bone, thought to be a joint of some kind, were placed next to the curb, but sometime thereafter one of the stones and the bone disappeared.

“It appeared that souvenir hunters had spirited away some of the find,” the article said.

Legend has it that those “souvenirs” were never recovered, and, since that time, the spirits of the individuals whose graves were disturbed have come to walk the grounds. 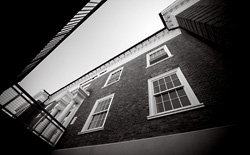 But Skopp credits another source for these stories as well.

The tale goes that, before Macdonough became a residence hall, it was owned by a wealthy family. The family built the hall with the intention of selling it to the college to become a dormitory. The family had an old butler named Mortimer, who, as time went by, came to have mental health issues.

One night, Mortimer killed a daughter — or maybe a girl who was staying with the family —  and stashed her body in the attic. There are brick walls in the attic, and the feeling was that he may have built an additional one in order to hide the body.

At any rate, that death was why in the middle of the night residents could sometimes hear a girl scream or a man laugh. Mortimer’s ghost was still searching for the girl, wanting to apologize for her murder.

The brainchild of Michael Duane ’80, this story was a work of fiction — after all, Macdonough was never owned by a wealthy family. He told it to residents one autumn afternoon, peppering his story with information about Macdonough Hall and vague references to forgotten sources.

“I told it to a bunch of incoming freshman,” said Duane, who is now a tax attorney in Pennsylvania. “And then they freaked out. They swore they could hear Mortimer. They stayed up all night long having parties so they could hear him. And I think it became kind of an annual thing around Halloween time.”

As for Duane, he never saw any evidence of ghosts in Macdonough.

“It’s just an old dorm; that’s it,” he said. “In fact, there was a bat on my floor. My dorm director Joe Hackett (’78 G’80) and I tried to get him out, and Joe hit him with a tennis racket, and that was about the scariest thing.”

He didn’t actually think much more about his story until many years later, when he got a call from Cheryl Hogle ’68 G’72, the former executive director of auxiliary services, telling him that his ghost was still alive on campus.

Of course, many say that Duane’s story does not account for all the strange occurrences in Macdonough.

Skopp puts it this way: “Whether or not there are ghosts depends upon the people who have seen them. If they believe in ghosts, then from that perspective there are ghosts, but from the perspective of others who are a little more skeptical, these are just stories that appear at Halloween time. I can tell you that I have never seen the ghost. Yet, I’ve talked to students who tell me absolutely there is something unusual. It is unexplainable. It must be a ghost in Macdonough Hall.”

And, while perhaps the most popular location for such stories, Macdonough is not the only place rumored to have or have had ghosts.

There was the ghost of the janitor who killed himself in old Normal Hall. He was said to walk the rooftop before that building burned down in 1929. And there is the son of George Henry Hudson, the professor emeritus for whom Hudson Hall was named. His four-year-old is said to have drowned after chasing his hat over the ice on the pond. Now, the story goes, that the boy sometimes returns when the weather is cold.