The Sky is No Limit

Twenty-three years after his graduation, Dr. John Grant '82 is having a blast "driving" remote-controlled vehicles. You may ask yourself, "Is this his job?" Yes it is, and it's literally out of this world. 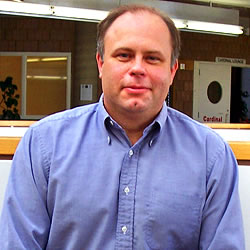 Working on the Mars Exploration Rover

John is a geologist at the Center for Earth and Planetary Studies at the National Aviation and Space Museum in the Smithsonian Institution. Currently, he is "in residence" at the Jet Propulsion Lab in Pasadena, Calif. There, he works on the day-to-day operations of the Mars Exploration Rovers.

A typical workday for John involves logging onto computers and studying data received from Mars from the day before and the encoding instructions back to the rovers.

"I have always been interested in Mars," said John. "So, as I worked through school, I gravitated toward the field of planetary geology."

After graduating with his degree in geology from SUNY Plattsburgh, Grant went on to earn his master's and doctorate in the field at the University of Rhode Island (1986) and Brown University (1990). Grant believes that his foundation at Plattsburgh State helped pave the way him to further his interests.

"Starting here at Plattsburgh State set the stage for me to do what I always wanted to," he said. "I got the opportunity to take classes that expanded my mind and by the time I was ready to move on, I was very well-prepared. Being at this institution and establishing that one-on-one connection with professors was key to my development."

Some of John's favorite memories at SUNY Plattsburgh involve being outdoors.

"I loved tubing down the Saranac River in the late spring," he reminisced. "In the winter, I used to skate on Lake Champlain and play hockey with friends."

John also remembers faculty members who supported him through his journey to discover his potential while a student at SUNY Plattsburgh.

"Dr. Glenn Myer was an outstanding advisor. He helped me to take classes that helped me find what I wanted to do," Grant explained. "Skip Barnette and Joseph Bodenrader were two other encouraging professors. Bodenrader helped me to understand math in a way that no one else had been able to."

John recently returned to SUNY Plattsburgh as a Distinguished Visiting Alumnus (DVA). The DVA program brings alumni back to campus to talk about their experiences since graduating from Plattsburgh State and to share new ideas with students. As part of the program, John met with many students, faculty and staff. He was a special guest lecturer in several classes and gave a public presentation, "My Other Cars are on Mars: Driving the Mars Exploration Rovers."

To learn more about the Geology Program at Plattsburgh State, please contact: