Matthew Gaul ’98 (ENG) has devoted the last decade to studying Byzantine iconography, an art style developed during the Byzantine Empire that was founded in the year 330.

His book on these sacred Christian images, “Tales of Glory: The Stories Icons Tell,” was published in 2013 by Leonine Publishers and explores Eastern Christian icons, which Gaul calls “a living spiritual treasury of beauty and devotion.”

The book describes the icons of his own house of worship in Watervliet, N.Y., St. Nicholas Ukrainian Greek Catholic Church, which resembles a Byzantine temple.

“The Eastern church has an organic, holistic history with a sensory focus,” Gaul said. 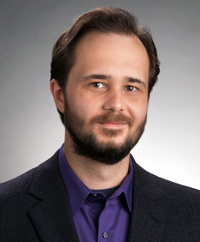 The idea for the project came from a request from Gaul’s parish priest, who asked for a basic book describing the church’s icons for the congregation. The finished piece outgrew expectations and became a substantial coffee-table book filled with photographs showing the vivid colors of the gilded icons.

Gaul arranged the book’s icons based on the hierarchical architecture of the church, creating stories from its heart outward: the vault, nave, sanctuary, side walls and other spaces. Each icon is described in three layers: the action, or what’s happening in the icon; through art appreciation; and its theological esoteric qualities.

“Icons, although sacred art themselves, are the refinement of secular art from Late Antiquity,” Gaul states. “They descend directly from the classical styles of the Greco-Roman world. The early Catholic Church borrowed the visual language of her day — not only from the art world but also from everyday life — and over the centuries adapted it to her own use. Much of this treasury has survived into the present day and even influences today’s culture.”

As an example, Gaul reveals that angels — be they depicted in great masterpieces or on a common greeting card — often wear a thin strip of fabric tied through their hair called a “fillet,” which, at times, was worn by single women to show they were still unmarried.

“For the angels, the fillet reminds us that they do not marry and reproduce — they are spiritual beings who are impossible to depict physically. So our humanized representations of them are not meant to be taken literally.”

Many of an icon’s details — colors, clothing, hand gestures, hair styles, plants and animals and even beard length — are packed with rich meaning developed over two millennia across diverse cultures, Gaul says.