Danielle Garneau and her environmental science undergrads have made a startling discovery while charting the presence of microbeads — those tiny bits of plastic found in exfoliating body washes and scrubs — in local water sources.

Garneau, associate professor in the Center for Earth and Environmental Science, and her student researchers are finding large quantities of other plastics — classified as films, fibers, fragments and foam — floating among and being ingested by aquatic life that often ends up on our dinner tables.

The No. 1 culprit? Fibers sloughing off from washing clothing. These particles, less than 5 mm, are so small, they are not designed to be removed in normal waste-water treatment plant filtration.

“We were surprised by the data,” Garneau said. “That’s a problem for us.”

And it’s a problem for the aquatic life that digests the plastics.

Garneau and her team have been able to make these discoveries the past two summers thanks to a National Oceanic and Atmospheric Administration-funded grant from Lake Champlain Sea Grant, a cooperative program between SUNY Plattsburgh and the University of Vermont dedicated to improving the understanding and management of Lake Champlain and its watersheds.

These experiences are above and beyond the classroom, giving students hands-on, real-life opportunities through close interaction with a faculty member who is out in the field doing research that, Garneau hopes, ultimately changes the way people think about their daily routines, which will “have broad impacts that limit microplastics pollution.”

Studying on the Lake

As part of her research, Garneau and her students collected nearly 50 deceased fish — 14 species — from the Father’s Day Lake Champlain International Fishing Derby this past June. In addition, the students gathered 15 dead double-crested cormorants, water birds that prey on the kinds of fish Garneau is studying.

The students extract the digestive tracts from the dead animals, separate out the esophagus, stomach and intestines. Through a chemical process, they soak the tracts, rinse them off and what’s left behind show the plastics consumed.

“We then take the contents and look at them under the scope to characterize them according to type: fibers, films like Saran Wrap and bags, fragments, which are shards of three-dimensional pieces of plastic, and foam from Styrofoam, and the beads,” Garneau said. 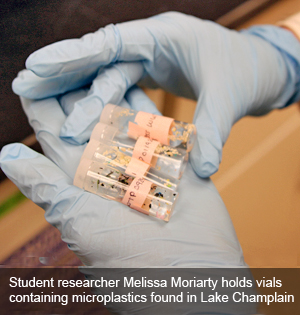 They look for signs of biomagnification, the concentration of toxins in an organism as a result of its ingesting food sources where the toxins are more widely disbursed.

“We’re expecting those lower on the food chain to have fewer; they’re eaten by predatory animals. We expect those animals to have more parts.”

The cormorants, highest on the food chain being studied, had the most. As for the types and quantities of plastic pollution being found through examination of fish and cormorants and sieving of waste water, after fibers are fragments.

“They may be bits of plastic from buoys and other marine supplies for instance,” Garneau said. “Film is next, from cellophane and plastic bags, straws and lids. And then foam, from cups and coolers. It could be that bigger parts may be passing through the digestive tracts.”

But fibers can amalgamate, creating a mesh that embeds itself into the digestive tract — akin to hairballs in cats.

“All parts, regardless of type, have properties that can absorb what they’re floating in — gas, toxins, heavy metals — and then when these get stuck in the gut, those toxins may leach into tissues,” Garneau said.

“It’s super sad,” said senior ecology major and research undergrad Melissa Moriarty of Schuylerville. “A lot of people eat those fish — some samples had so much of it. I wish people would do more to help decrease the amount.”

The implications are wide reaching. Agriculture had traditionally used sludge, extracted from waste water treated at waste-water treatment plants, for fertilizer. These contaminants are then released into the earth.

“They’ve been found in honey, in bees and earthworms,” Garneau said.

But it’s not only pollutants being dumped and flushed — or inadvertently discarded — into the lakes and rivers that create the problems.

“People who have septic systems need to pump them every two, three years,” Garneau said. “The sewage goes back to the waste water treatment plants. We all contribute. But it’s small changes we can make to reduce this contamination.

We can refuse straws and lids at restaurants, don’t use plastic bags. They may seem like insignificant gestures, but if enough people do it, it’ll make a difference.”