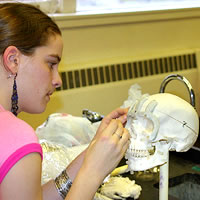 Anna Brost studies the skull in front of her, carefully placing precisely cut strips of clay onto the facial structure. Her goal is to reproduce the face on the skull and to create a close likeness of what the person would have looked like while alive.

Brost, along with classmates Ryan McCalla and Courtney Donovan, are working on a term project for Dr. Mark Cohen, SUNY distinguished professor of Anthropology, in his forensic anthropology course. Each of the three students has a replica skull. By using clay and glue sticks, they are "re-creating" the face.

"I have enjoyed this project," said Brost, a junior anthropology major from Rome, N.Y. "I found it very interesting, and I feel I learn better when I get to do things hands-on."

That's the philosophy of education that Cohen subscribes to - having students learn by doing.

"I create problems instead of giving facts," said Cohen. "Having students learning hands-on is the best way to teach. It's like throwing the students in the water making them learn how to swim. This is a very interactive project, and I have found that small group projects create the best environment for students to learn."

Other projects have included learning how to examine cut marks and soil samples as well as mapping and drawing techniques used in real crime scene recovery and reconstruction.

The Art of Forensic Anthropology

Forensic anthropologists apply standard scientific techniques developed in physical anthropology to identify human remains and to assist in the detection of crime. Forensic anthropologists frequently work in conjunction with forensic pathologists and homicide investigators to identify a dead person, discover evidence of foul play, and/or how much time has elapsed since death. This line of work has recently become popular due to the hit television show, CSI.

In addition to assisting in locating and recovering suspicious remains, forensic anthropologists work to suggest the age, sex, ancestry, stature and unique features of a decedent from the skeleton.

"I'm trying to figure out as much as I can from the skull," said McCalla, a sophomore anthropology major from Ballston Spa, N.Y. "Some of the things to detect include the age, sex and geographic origin. This can be difficult by looking just at the skull. If I had the pelvis too, it would be much easier." 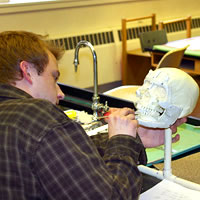 McCalla has researched his skull and, by comparing it to widely accepted charts compiled from autopsies of known people, has determined that it is from an African-American male, whom he has affectionately named "Bruce." This research is labor intensive and can be very time consuming.

"This project has to be the most challenging project that I have ever done," said Donovan, a sophomore anthropology major from Shirley, N.Y. "I like to pay attention to the process of the skull I am working on."

"Working on the skull is more like forensic art - part science, part art," said McCalla. "I am making the closest reproduction that I can by following the proper methods and using my artistic ability. We want to get a likeness that can be identified by a family member or police officer, for example."

A Lesson in Debunking

"I'm also trying to teach the students to debunk what they have seen on such television shows as CSI. I want them to ask themselves, 'Can you do this?' I'm teaching skepticism."

To learn more about the Anthropology Program at SUNY Plattsburgh, please contact: