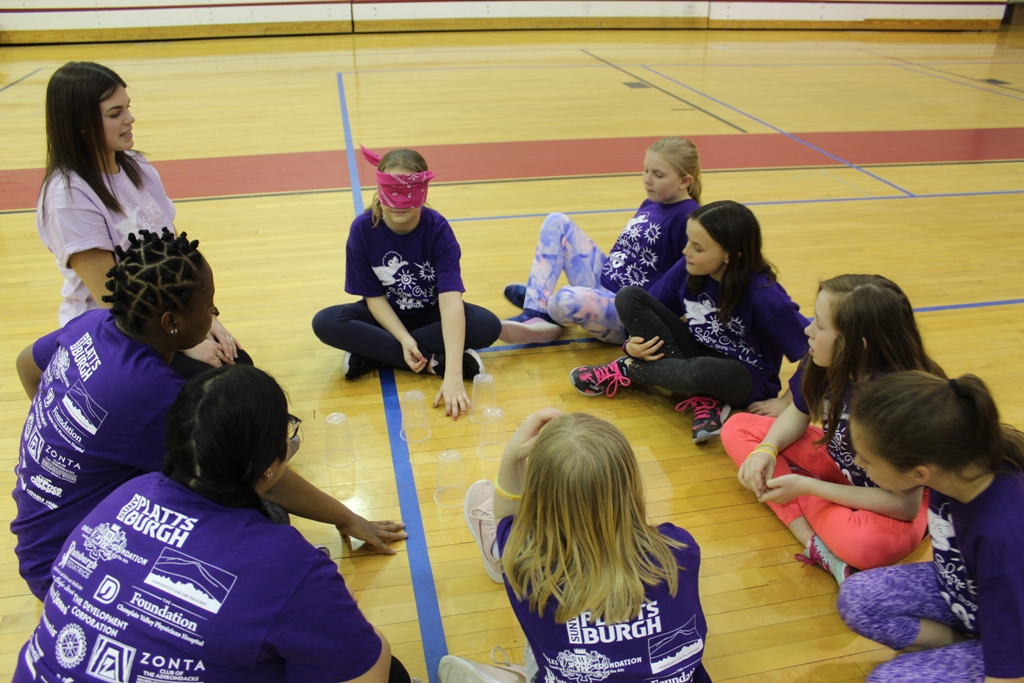 While 200 elementary-school girls ran around Memorial Hall gymnasium, swam in the pool and participated in workshops aimed at enhancing self-esteem, Colleen Lemza reminisced about a decade of Shine On! 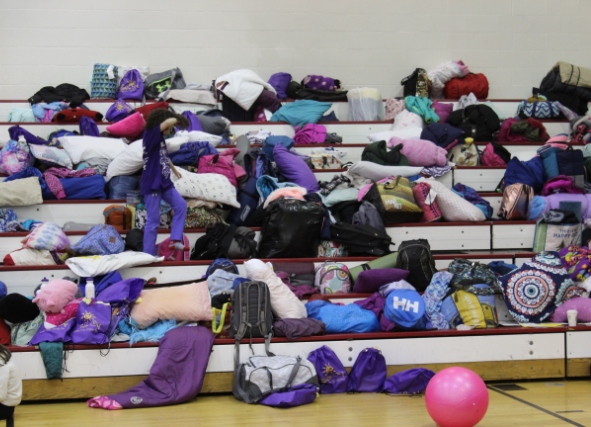 The program founded by the associate professor of public relations began on a shoestring and ran for four hours on a Saturday. Fifty girls signed up; 76 showed up. Ten years later, the program welcomed 200 North Country girls in third, fourth and fifth grade, and Lemza said she still had a waiting list.

The idea came about when Lemza was a certified mental-health counselor who kept seeing “12, 13, 14-year-olds in the emergency room who couldn’t understand how they got themselves into the situations they were in,” she said.

“They had no self-esteem, no self-confidence. They were cutting themselves, were anorexic, were allowing boys to abuse their bodies, they were pregnant. It was so sad, and there was nothing I could do as a mental-health counselor. I thought if there was some way to get to them earlier and convince them they had self worth, they might not wind up in these situations.”

About the same time, Lemza got her daughter a pair of shoes that, while not the name-brand some girls that age were wearing, “Emmy was so excited about them, she slept in them.”

“The next day, she wore her new shoes to school. When I picked her up, she was in her socks, crying. When I asked why, she said she never wanted to see those shoes again.” A friend said they weren’t “real,” Lemza said. She said she knew she couldn’t change all the mean and judgmental girls in the world, “but I knew I needed to make my girls stronger and tougher. I didn’t know how at the time, but I knew I didn’t want them to become like the girls I took care of in the ER.”

After Lemza joined the faculty in journalism and public relations, she and a few of her students began to piece together four of five workshops aimed at girls in the third-through-fifth grades. 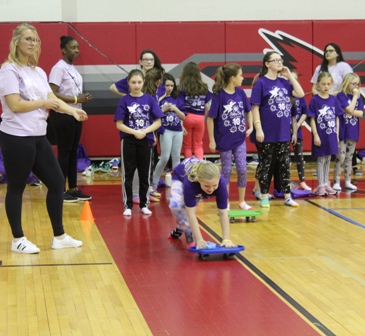 Over the years, Shine On! evolved into a weekend overnight program that works to increase resiliency in girls so they’re better equipped to handle the emotional pressures they’re going to face in middle school, high school and beyond, Lemza said. Lemza’s student-run Shine On! committee plans the weekend, held April 6-7 this year.

Danielle Johnson, director of the North American Center of Excellence for Transportation Equipment with the North Country Chamber of Commerce, and a 2012 public relations graduate, was an early participant on the planning committee.

“The world I grew up in didn’t have the level of connectivity and easily accessible anonymity that there is today,” Johnson said. “I couldn’t imagine being a young girl seeing not only television, magazines and advertisements with unrealistic — and sometimes unhealthy — body types and messaging, but now social media adds a whole new component.

Girls are “Capable of So Much”

“It’s so important for girls to understand what Shine On! teaches, that they have the strength to do things their own way, and that they are capable of so much,” she said. “The world that surrounds us can be really tough to navigate — as a pre-teen and as an adult.” It’s important for these young girls to have “the skills to know what is real and what is just an ad, how to stand up for yourself and for others, and how important it is to have strength in your character,” Johnson said.

Alison Hayes, a junior nursing major from Nanuet, N.Y., joined the Shine On! team last year during the pool activity, she said.

“I really loved the idea of the program and was happy to get involved,” she said. “The uniqueness of the opportunity to empower girls the way I wish I could have when I was their age inspired me to get involved in Shine On!.

Social media “really blew up for me when I was in middle school,” Hayes said. “Comparing myself to other girls and cyber bullying were brought into our lives, and parents really didn’t have experience in that since it was so new to everyone. Knowing how to be proud of yourself, your accomplishments and separating the online world from real life was something I learned over the years, and passing down that information is important.

“The workshops are developed to help these young girls obtain important life lessons or at least helpful tools to go through life more successfully,” Hayes said. “We want them to understand that the most important thing is to be proud of the woman you are and to support the women around you to be the best they can be as well.”

“And this hear, we’re doing a parent workshop series on how to raise a strong daughter,” Lemza said.

Johnson said the program has “become a huge part of how I push myself as an adult.”

“Those character strengths Shine On! focuses on help me to this day, as a friend, as a professional, and now as a mother.” She said she knows she has the “grit to push through and be resilient” when she’s having a difficult time.

“This community is so fortunate to have this program and that Colleen’s drive and vision have made an impact beyond just the girls who attend the conference,” Johnson said. “Every woman on the planning committee, every mentor, every presenter — they soak up these messages and they share them, and it is making a difference. I know I will always be grateful. I learned so much more from Shine ON! than how to organize a well-run event.”