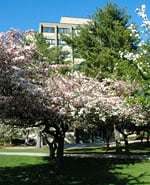 The results are in.

SUNY Plattsburgh's "Power Down Plattsburgh" challenge resulted in a five percent reduction in energy consumption on campus this Earth Day.

Sponsored by the newly formed Campus Sustainability Task Force, the challenge asked all faculty, staff and students to find ways of conserving energy - turning off unneeded equipment, unplugging chargers when not in use and turning off lights.

To measure results, the college's electric meters were read for a few days in a row and the kilowatt-hours compared. On Tuesday, the campus used 80,020 kwh. On Wednesday, Earth Day, this number dropped by 4,040 kwh to 75,980 kwh - a five percent reduction compared to the day before.

"Our actions were equivalent to turning off nearly 5,000 light bulbs (100 watt) for a period of eight hours - one for every person on campus," said Dr. Robert Fuller, director of the Center for Earth and Environmental Science. "Our energy savings for a single day resulted in as much as 5,000 pounds of carbon dioxide, considered the primary cause of global warming, being kept out of the atmosphere. If the campus could sustain this level of reduction for an entire year, it could save the college and the State of New York nearly $45,000."

Members of the Task Force hope to revisit the challenge on at least an annual basis.

The Task Force's efforts are part of SUNY Plattsburgh's recently approved strategic plan for 2009-2012, which lists increasing the sustainability of the college as a priority.

According to SUNY Plattsburgh Provost Jay Stein, these efforts "build on the college's rich history and legacy of environmental education, citizenship and stewardship."