Degrees Conferred on Class of 2018 at Spring Commencement 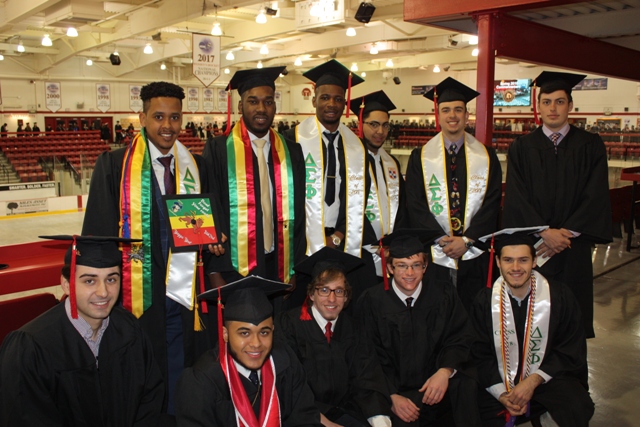 Afternoon rain showers didn’t dampen the spirits of nearly 1,000 graduate and undergraduate students at SUNY Plattsburgh who have successfully completed their studies and awarded diplomas at the college’s annual spring commencement ceremony May 19 at the Field House. 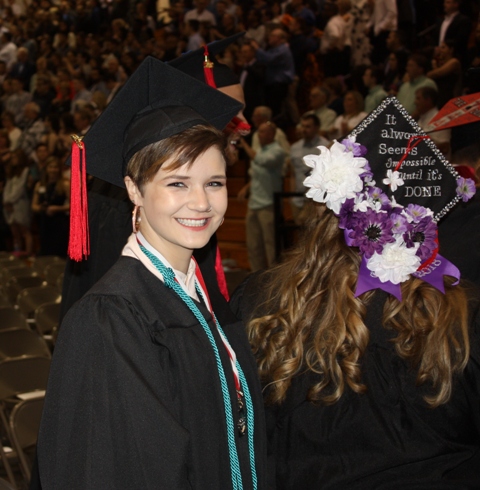 One of the earliest distinctive signs used by medieval university official, a mace was originally a wooden staff carried by royal messengers. Barton used his own unique technique of silver inlay in a piece of black walnut to create a modern adaptation of this tradition.

Both ceremonies began with a processional performed by the Royal Canadian Mounted Police Bagpipe Band followed by the singing of the National Anthem by the Plattsburgh State Gospel Choir. Martin Mannix, chair of the Plattsburgh College Council, presented Dr. E. Thomas Moran ’69 G73, distinguished service professor emeritus and retired director and founder of the Institute for Ethics in Public Life, with the 2018 Distinguished Service Award.

Moran said it was an honor to be among the recipients of the award, first presented by the College Council in 1966 honoring those who have made a lasting contribution to the college, community, state, nation, and/or to the international community.

He also gave a nod to the faculty and then to the students, of whom he said “are the antidote to the despair that so often assaults us in the world news. I have always found them to be decent, openhearted and genuinely appreciative of the opportunity to cultivate their talents.”

And public education is what enabled that cultivation, he said. The system of public higher education “is an engine of democracy because it prepares citizens from all backgrounds for civic life and leadership.

The system of public higher education built on this belief is one of the great achievements of our society.

'Keep Faith with that Achievement'

“You graduates, who are yourselves among its most direct beneficiaries, must keep faith with that achievement,” Moran directed them. “No dream you have today will be foreclosed to you because your education here failed you; and that when it is your turn to shoulder the institutions of this world, you will have the capacity and the commitment to do so.”

Graduates Kyala Clegg of Clayton, N.Y., and Mackenzie Dumas of Shushan, N.Y., were commencement speakers for the morning and afternoon ceremonies, respectively. Clegg, a nutrition major, said she was appreciative that SUNY Plattsburgh “offered me a firm foundation in the nutrition program and allowed me the opportunity to cross disciplines to truly recreate myself in my time here.”

Dumas, a communication studies major, told her fellow graduates to be excited when great things happen, but to “also know that not everything will happen as you were hoping it would,” suggesting they instead “know that you have the strength and ability to push through and move forward.”

After the official tassel change from right to left, led by Student Association President Jessica Falace, Dr. Ashley Gambino ’03 G’05, first vice president of the Plattsburgh Alumni Association, and Marcia Cognetta ’98, member, board of directors, welcomed the newest members into the association at the morning and afternoon proceedings, respectively. The SUNY Plattsburgh Alumni Association now claims Saturday’s graduates among their ranks of more than 63,000.