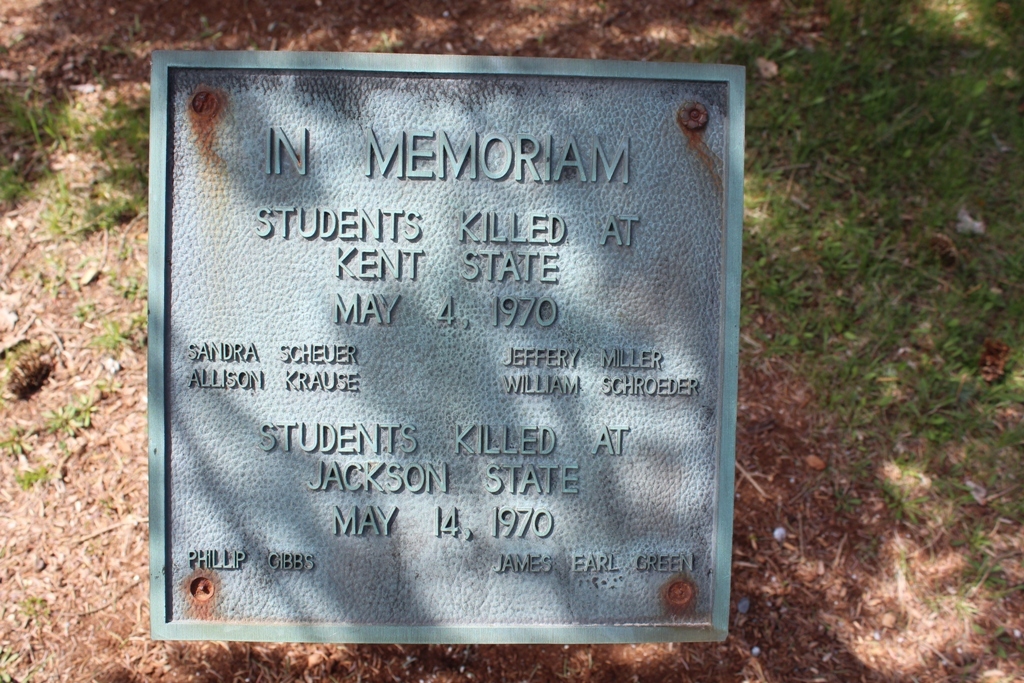 SUNY Plattsburgh will host its annual commemoration honoring the victims of the 1970 Kent State and Jackson State university shootings Thursday, May 6 beginning at noon at the memorial in front of Kehoe Administration Building.

This marks the 51st year since the shootings and the 50th year that SUNY Plattsburgh has remembered the events of May 1970  when four people were killed and nine injured at Kent State University in Ohio, when the National Guard opened fire on students who were protesting the Vietnam War and the military intrusion in Cambodia.

Days later, May 15, two students were shot and killed and 12 injured by police at Jackson State University in Jackson, Mississippi. Students had gathered there to protest racism. One of the students killed was high schooler James Earl Green, who was walking home from his job at a local grocery store.

SUNY Plattsburgh’s first memorial to the shooting victims was held in 1971 at the first anniversary. On that day, some 200 people, led by school leaders, administrators and local clergy, held a ceremony at the base of the Macdonough Monument in downtown Plattsburgh. They then marched down Cornelia Street to campus.

“The commemorative ceremony is significant at SUNY Plattsburgh as it is a reminder of the historical impact across the world and throughout higher education,” said Zyaijah Nadler, Title IX violence prevention educator and outreach coordinator. “Student activism gained momentum through this pivotal moment, and it helped protect today those who assemble for the belief that they can change the world for the better.

“The ceremony recognizes our commitment to never forget the lives that were lost for the privileges we are now granted,” she said. “Fifty-one years later, may the bravery and activism also serve as a reminder of how much has changed and how much work there is left to be done.”

The May 6 ceremony will include laying flowers on the memorial, a brass plaque found in front of the towering pine tree in front of Kehoe, remarks from Dr. Alexander Enyedi, president of the college, and student remarks.