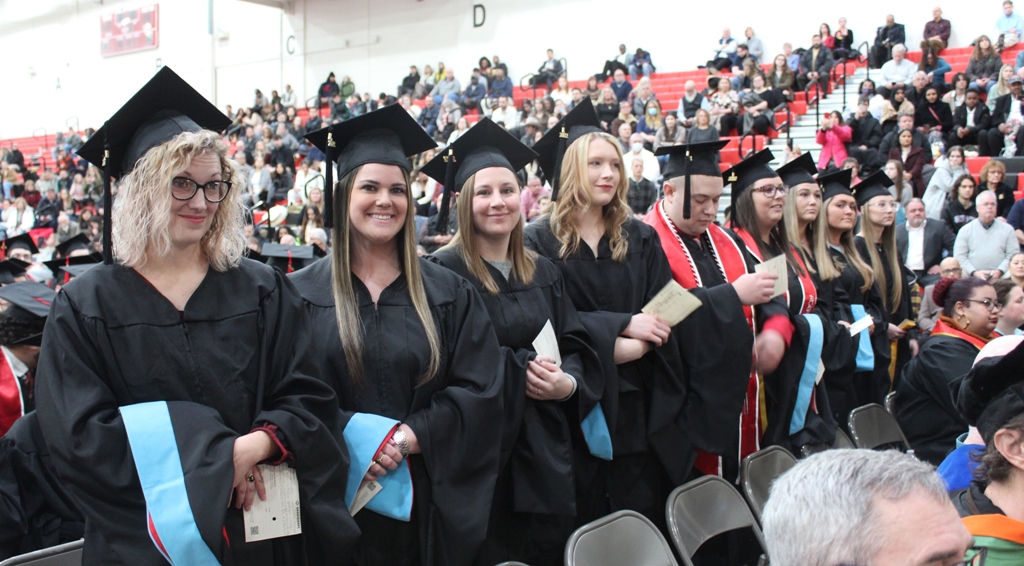 A Nor’easter did not keep SUNY Plattsburgh bachelors and masters candidates from moving into the ranks of alumni at Saturday’s annual winter commencement exercises.

Held following a two-hour storm delay, family and friends gathered at the newly renovated field house gymnasium for the first in-person commencement — with guests — since December 2019.

President Alexander Enyedi welcomed those gathered after being led to the platform by the returning Royal Canadian Mounted Police bagpipers, who were making their first appearance since 2019 as well and said before the event that they were glad to be back. 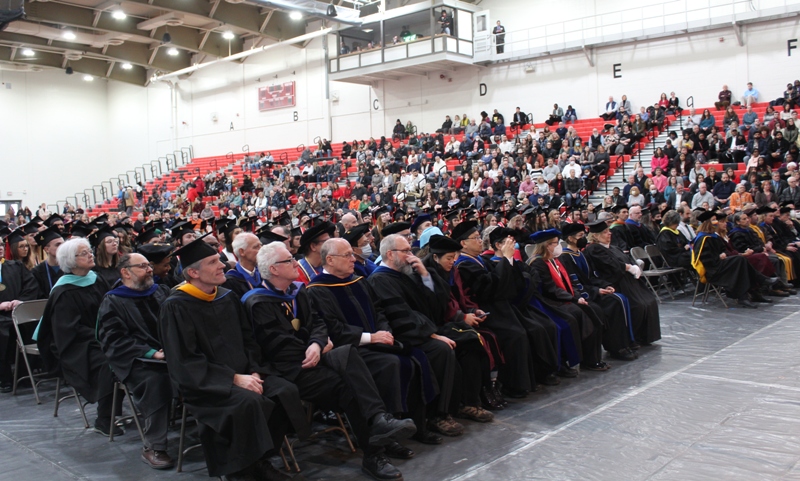 Once the platform guests were seated, Enyedi approached the podium.

“We would not be here today if it were not for the scholars, teachers and mentors who have supported today’s graduates throughout their educational journey,” he said. For the graduates themselves, Saturday’s commencement was the end of a college journey marked by lockdown, masking, social distancing and virtual classes.

“While much of your college experience today is as it was in your first days, much of your time in higher education has been incredibly challenging and incredibly tough,” he told them. “No one in a century faced the difficulties you have, of a pandemic, the shift in expectations, and the dramatic altering of your course work and college life. 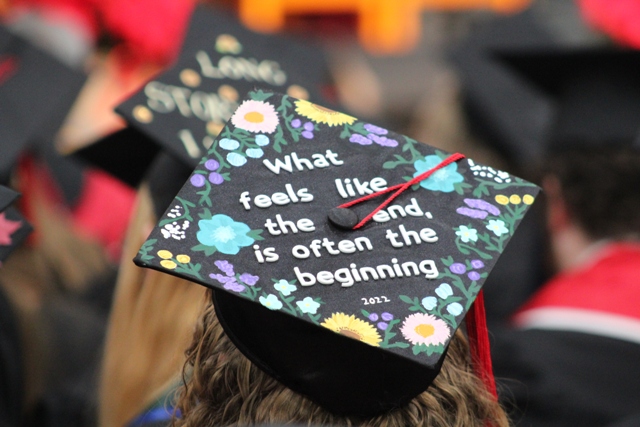 “You have persevered and overcome, which is cause for celebration. You demonstrated what Cardinal Strong means,” he said. “Your peers here today, elsewhere on campus and those watching by livestream in a thousand places, commend you, and celebrate with you. As do I.”

He called attention to their success, and applauded the dedication and hard work that got them to this moment and will stay with them long after leaving Plattsburgh.

“After you leave here today, I have great confidence you will contribute to making our world a better place for yourselves, your families, and generations to come. This is what Cardinals do,” Enyedi said. “You will take the opportunities and experience you’ve had and achieve much. We are proud of each of you who have graduated … especially our first-generation students who are graduating today.

“At this moment, in this auditorium, I want you to know how proud I am of your accomplishments,” he said.

Two people were honored at the proceedings with the Distinguished Service Award, given in recognition of those who have directly or indirectly played a key role in advancing the college.

Conceived by the late Dr. George Angell, president of SUNY Plattsburgh from 1954 until his retirement in 1973, and bestowed at the pleasure of the Plattsburgh College Council, the award has been given at the pleasure of the council since 1966 to individuals in recognition of their contribution to the college community or state and demonstration of leadership ability in the service of others.

“Originally, UFirst was a SUNY Plattsburgh employee credit union — established on the campus 50 years ago. It has since grown and currently serves university employees and anyone who lives, works or worships in Clinton, Franklin and Essex counties in New York, and Franklin and Grand Isle counties in Vermont,” Enyedi said. “UFirst’s bond with the college remains strong and this is due, in a large part, to Linda's commitment to this institution and the commitment of the many employees she has hired over the years.”

Her service to the community runs deep, having served as a trustee for the University of Vermont Health Network, Champlain Valley Physicians Hospital, past chair of the North Country Chamber of Commerce, and current chair of the Mountain Lake PBS Board of Directors. Along with the SUNY Plattsburgh Distinguished Service Award, Bourgeois was named a distinguished alumnus at Clinton Community College.

“I love the North Country. I love this community. I believe that is why it is so easy for me to be involved in so many organizations. I find deep satisfaction in volunteering and making this community even stronger,” Bourgeois said after her introduction. “I am extremely proud of my connection with SUNY Plattsburgh over the course of my career as the CEO of UFirst Federal Credit Union. 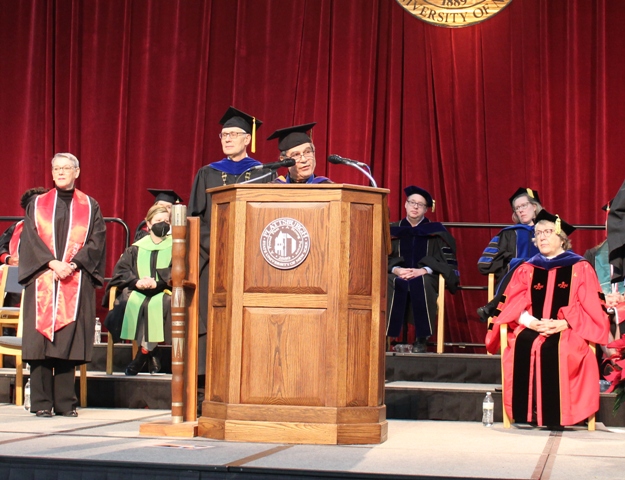 The credit union was established in 1971; its membership has expanded, the facilities expanded. From scholarships through the credit union endowment and contributions to the North Country Scholarship to its purchase of a new Zamboni machine for Cardinal athletics, “our connection with the college has remained a core part of our identity,” she said.

Dr. Mohamed Gaber, distinguished service professor of accounting, was recognized for his service and life’s work to SUNY Plattsburgh.

Gaber joined the faculty at the college nearly 40 years ago, 27 of which were as chair of the accounting department. His devotion to his students and their success is well documented and unparalleled, providing academic and career support throughout their years at SUNY Plattsburgh and beyond. Most of his students remain in touch long after graduating.

Some of their devotion is based on academic and classroom support, but some is given because Gaber has been known to give money from his own pocket to help students with tuition, books, travel, and other needs in order to aid them academically and professionally.

“He has helped build up the university by establishing in-demand programs, and growing relationships with key industry firms, connections that have led to outstanding careers for countless students. His mentorship of junior faculty, department chairs, and deans has also been a tremendous help the SBE and is one of the primary reasons we are successful,” Enyedi said.

“I honestly believe the only reason to stand before you today and receive such prestigious award is due to the students and alumni I have been honored to serve over the years,” Gaber said before he and Bourgeois were presented their awards. “Since my arrival as an accounting faculty member at SUNY Plattsburgh more than 37 years ago, I have never considered SUNY Plattsburgh a place that I work for; rather it is an institution that lives in me.”

Following the Distinguished Service Award presentations, candidates for masters and bachelors degrees crossed the stage to be greeted by the president. Senior environmental science planning and management major Emily Reinhardt of Newark, N.Y., greeted her fellow graduates as their student speaker, reflecting on her decision to make SUNY Plattsburgh her second home and on the faculty members who made it as such. While one stage of her Plattsburgh journey has come to an end, a new one opens next semester as she begins her master’s degree in the Center for Earth and Environmental Science’s natural resources and ecology program.

“Each and every one of us has overcome challenges throughout our college career, and yet here we are walking across the stage, ready to take on life with stronger minds and bigger hearts,” she said. “I wish the Class of 2022 all the best for what will be their next chapter in life, most certainly a journey with a lot of unknowns and hopefully a journey with a lot of love and compassion along the way.” 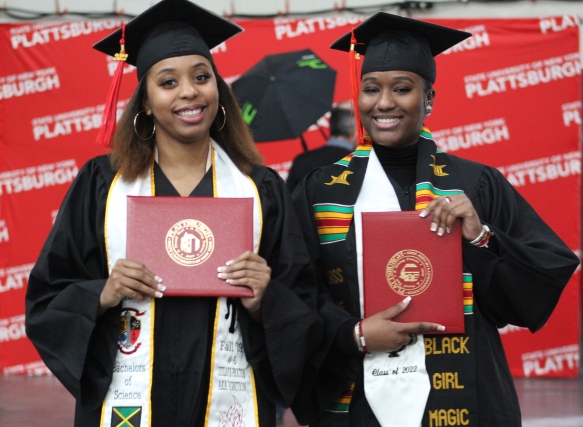 Reinhardt then directed her fellow classmates to move their tassels from the right side of their mortar boards to the left, over their hearts, and congratulated them as members of the Class of 2022.

To watch the live broadcast of Winter 2022 Commencement or to see a list of graduates, visit https://www.plattsburgh.edu/plattslife/commencement/. 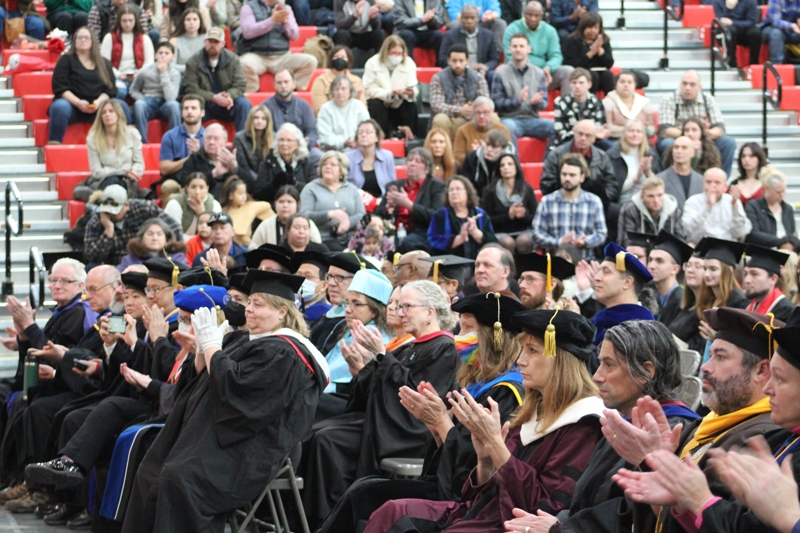 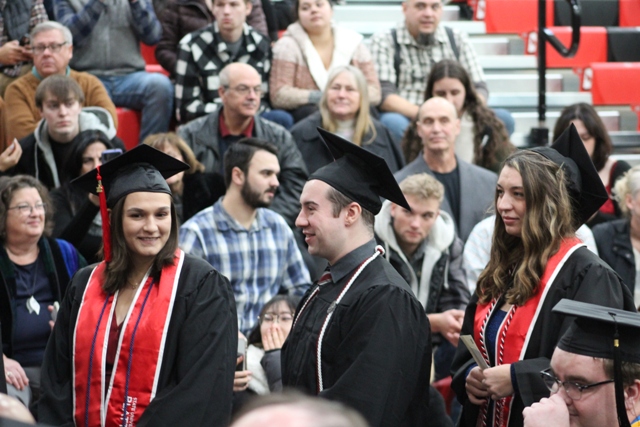 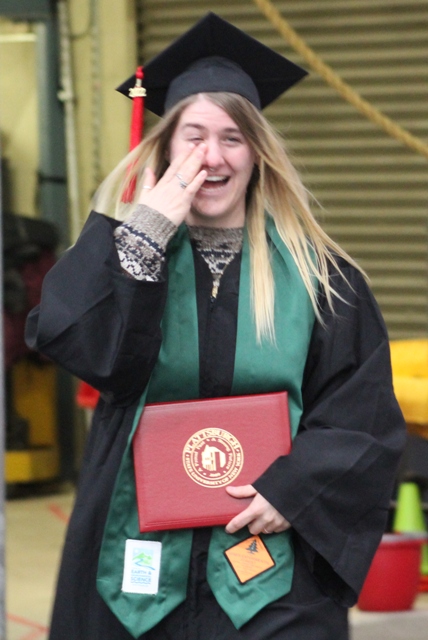