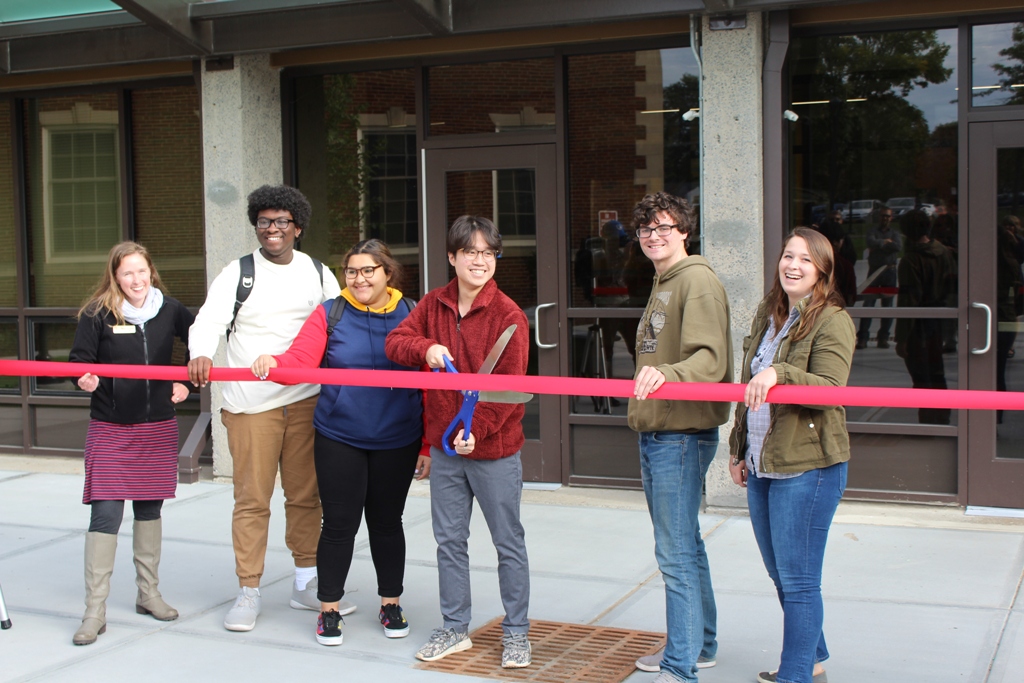 The $19 million renovation project, financed with bonds through the Dormitory Authority of New York, included a new open stairway access to allow natural light into the basement recreation area, a new lounge on the first floor and another on the ninth — christened the Mountain View Lounge, which affords views of the Adirondacks and the Green Mountains of Vermont.

The project also included study areas and full kitchens on each floor and a reconfigured office space for the Office of Campus Housing and Community Living and more. Whiteface is one of the college’s three first-year student halls and was renovated with an eye toward the programming needs that support freshman success.

Paid For By Revenue Earned

Residence hall projects are paid for through revenue earned by the halls on each campus. DASNY helps secure the low-cost, tax-exempt bonds that are in turn paid off by that revenue.

The Sept. 30 ceremony featured a welcome from Community Director Danielle Attanasio, who, as an undergrad served as a resident assistant for two years in Whiteface, and remarks from Josee Larochelle, vice president for administration and finance and chief officer in charge, Bryan Hartman, vice president for enrollment and student success, and Steve Matthews, director of campus housing and community living. 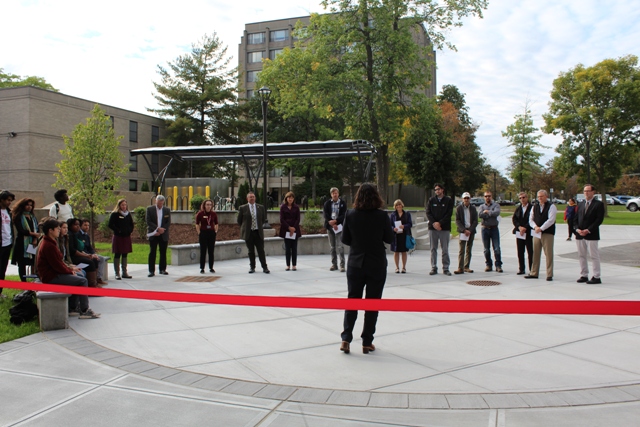 “We are committed first and foremost to student success and the student experience,” Larochelle said. “It is at the center of who we are and why we exist. The partnership with DASNY provides us a seamless path to renovate our residence halls. This ensures they are state-of-the-art facilities that will provide a vibrant living and learning environment for our students. The completely renovated Whiteface Hall is an example of the best on-campus community-living experience for our students."

Macdonough First to be Renovated

Renovations to campus housing began more than 15 years ago when plans were made to renovate the oldest residence hall on campus, Macdonough. Although never taken offline, Macdonough was completed in 2005.

Hood, in May 2011, was the first to be taken offline, re-opening in August 2012. A cycle of one hall in the planning phase, another in construction and another re-opening brought the campus to the Whiteface re-opening. 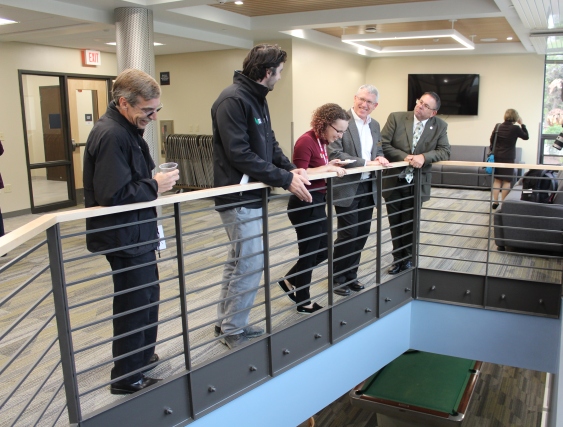 “The program has flourished and blossomed from when we first instigated this plan,” Harman, who previously served as director of residence life, said at the ceremony. “We know that to have student success, we have to make both social and academic connections to their campus. We keep both of these things in mind — focusing on community space and focusing on academic work. It’s a priority, and it shows in the renovations here and in the other buildings. This will support student success for years to come.”

Matthews said that like Attanasio, he had lived in Whiteface after transferring to SUNY Plattsburgh.

“It’s really nice to give a renovated building to our first-year students,” he said. “It will make wonderful memories for them — certainly different from my memories of when I first arrived in 1987.”

Although they were not in attendance, Sen. Betty Little and Assemblyman Billy Jones offered comments, congratulating the college on the completion of another residence hall renovation.

“I am delighted for SUNY Plattsburgh, its students and the North Country as a whole to see this multi-million-dollar project completed,” Little said. “It is a symbol of our dedication to our youth, ensuring they have the facilities and tools they need to become the future stewards of our economy. I look forward to watching them flourish and make our communities proud.”

“I am continually amazed by the work SUNY Plattsburgh puts in to make sure its students have the best possible accommodations to live, study and grow,” Jones said. “Thank you, DASNY and SUNY, for being such reliable partners over the years and making the North Country a more attractive place to earn a degree.”

“The partnership has developed a cost-effective and efficient program to update our residence halls, providing our students with safe, healthy and more modern living arrangements,” said SUNY Chancellor Kristina Johnson. “The Whiteface Hall project is the latest in a long line of renovations constructed across SUNY campuses around the state this summer, and we are pleased it was completed on time to be used this fall.”

DASNY’s managing director of construction, Stephen Curro, said the “cost-effective, sustainable solutions incorporated into Whiteface Hall are a clear example of our mission to meet or exceed SUNY Plattsburgh’s needs and provide its students with an optimal environment for living and learning.”

Kent Hall is the current residence undergoing renovation, having been taken off line in May. With its completion in August 2020, the total will 10 of the 12 on campus to be finished. The college will assess whether to go through with renovations on the remaining residence halls, Banks Hall and Adirondack.