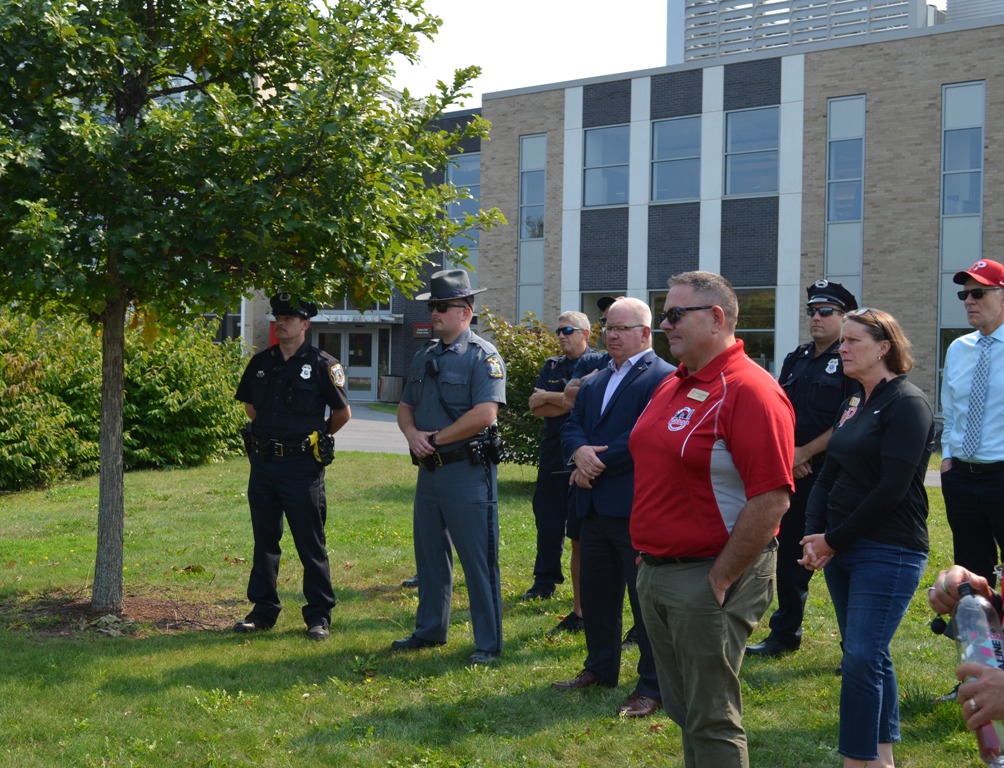 SUNY Plattsburgh remembered the lives lost 21 years ago during the 9/11 terrorist attacks at a memorial ceremony Sept. 9 at Hawkins Pond.

Students, faculty, staff, and first responders gathered around the plaque that bears the names of two Cardinal alumni — William Erwin, a 1992 graduate who was a broker for Cantor Fitzgerald, and Robert Sutcliffe, a 1984 graduate who worked as a broker for Harvey, Young and Yurman.

First responder Brian Scott Falb, a New York State trooper, who died of cancer in March 2017, was also officially recognized at the ceremony. 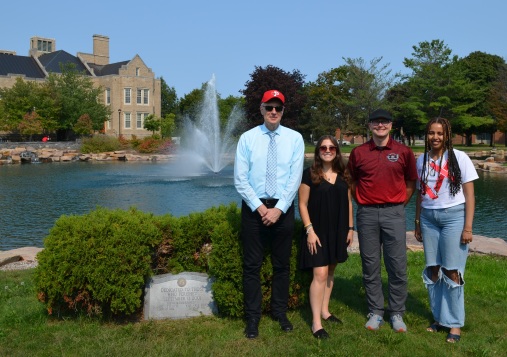 “We have chosen to hold this memorial ceremony each year so that we might hopefully assist in helping others heal from the tragic events that took place on that day,” Omicron Delta Kappa President Nicole Palmieri said at the ceremony. “We believe that there are timeless lessons that we all need to be reminded of, in hopes that this type of event does not happen again.

“At the forefront of these lessons is to teach individuals, groups, communities, states, and countries to resolve conflict in non-violent and peaceful ways,” she said.

First responders from the fire department and Plattsburgh police and university police were in attendance. The significance for remembering such a devastating day was repeated.

“There’s very limited events that happen throughout your lifetime that you say, ‘I will always remember what I was doing when this happened,’” Plattsburgh City police officer Shane Perrotte said. “This is one of them.” 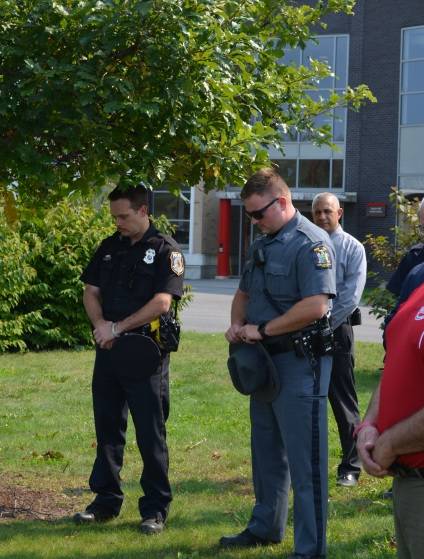 Now 36 years old, Perrotte was sitting in his high school classroom when his teacher told him about the towers being struck. University Police officer Conrad LaVarnway was in fourth grade when he learned what happened, and being so young, it was an event he truly didn’t understand at the time.

“I've come to realize that terrorism and attacks on our country don't discriminate against anybody; it can happen any day, and you never know when it will happen or how large” an impact it’s going to have, LaVarnway said. He said it’s important to remember the lives lost and the families who suffered.

Palmieri also noted sculptor Noah Savett’s work, “Tempered by Memory,” on loan and on display in the Au Sable Hall lobby. The metal in the sculpture was acquired by the artist through the World Trade Center Distribution Program. The steel was recovered from the wreckage of the World Trade Center by the Port Authority of New York and New Jersey after the 9/11 attack.

“One thousand two hundred requests for memorials using World Trade Center steel were made,” Palmieri said. “Memorials are now in every state in America and seven foreign countries.”

The ceremony concluded with a moment of silence for all those who lost their lives and for the families affected by 9/11.