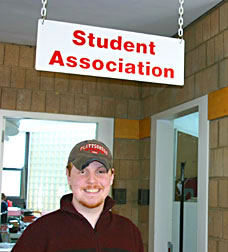 The 868-161 vote means that full-time students will continue paying $65 per semester to the SUNY Plattsburgh Student Association.

Michael Cashman, Student Association president from Ballston Spa, N.Y., said the mandatory fee provides annual funding that is critical to the quality of students' lives at the College.

He said the funding supports not only 64 clubs and organizations, but also a wide array of events, programs and services on and off campus. These include Springfest, Burghy Video Den, SA Shuttle, Burghy Bikes, President's Speaker Series and Homecoming.

The fee also supports services not commonly associated with the Student Association, says Cashman. Among them are the Claude J. Clark Learning Center, which offers academic assistance to undergraduate and graduate students, and the Center for Service Learning and Volunteerism, which gets students and faculty involved with local non-profit organizations.

"I'm very, very pleased that the student body once again recognized that there is a lot of wealth in supporting our Student Association mandatory fee," said Cashman following the vote.

The mandatory-fee referendum is required by the SUNY Board of Trustees and takes place every two years. The next vote is set for 2007.

At SUNY Plattsburgh, students have never voted down the mandatory Student Association fee.

Students also voted for SA officers during the recent election. Cashman, a graduate student in student affairs in professional practice and a 2003 SUNY Plattsburgh undergraduate, was re-elected president, with Kimberly Garrison winning the executive vice president spot. The following are the election results:

The following students were voted in as SA senators: