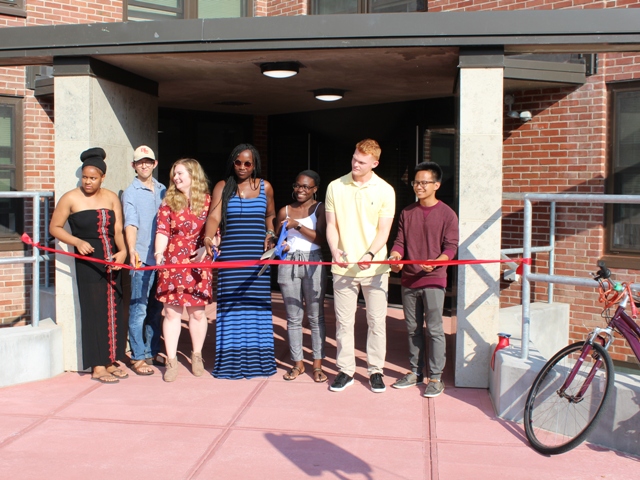 The latest SUNY Plattsburgh residence hall to see a multi-million-dollar renovation was feted during a ribbon-cutting ceremony and reception Tuesday, Sept. 18 under bright late-summer sunny skies.

Fifty-seven-year-old Macomb Hall was taken offline in May 2017 for extensive renovations.

Elevator Built on Outside Wall 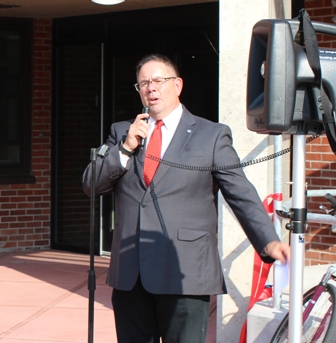 According to Steve Matthews, director of housing and residence life, who emceed Tuesday’s ceremony, the elevator was installed on the outside wall, adjacent to Saranac Hall, allowing a bank of windows to be built around it.

Because Macomb is built partially into the side of a hill, Matthews said the project called for digging out and installing the windows for offices on that side of the building. Prior to that, the elevator had been on the inside wall, creating a much darker space.

“By building the elevator on the outside and surrounding it with windows, it’s brightened up the space considerably,” he said. Security doors allow SSS and EOP clients and staff members access to that space but not the residential portion of the building.

The old gang-style bathrooms were removed fitted with several “pods” for individual use within the existing space, Matthews said. Prior to this project, bathrooms were renovated, but privacy was an issue. Now, the new bathrooms in Macomb — and later in other residence halls including the retro-fitted Mason — will be individual units with showers, sinks and toilets, he said.

The private entryway to both office suites is clean and spacious; students who use these services have a direct path from the elevator. Both suites have spacious and bright waiting areas with new furnishings. Previously housed in Angell College Center, both SSS and EOP were centrally located, but the divider-space offices and cubbies provided no privacy for students, many of whom visit these offices for highly personal and private reasons.

“We’re getting organized and settled in,” Carpentier said. “But it is beautiful, and the students love it.”

Under this system, one dorm goes offline in May while another is readied for reopening with the start of the semester that follows.

The rehab project is funded through bonds made available through the Dormitory Authority of the State of New York. Residence hall projects are paid for through revenue earned by the halls on each campus. DASNY helps secure the low-cost, tax-exempt bonds that are in turn paid off by that revenue.

Construction on Whiteface Hall, the next in line, began in May 2018. Construction on Kent Hall is slated for May 2019, bringing the total to 10. Bryan Hartman, vice president for student affairs, said “it is our goal to complete the buildings identified if we continue to believe we can afford it.”

“We are always designing 18 months ahead of time,” Hartman said.

After the 10 halls are complete, the college will then assess whether to go forward with renovations to the remaining buildings, Banks and Adirondack, Hartman said.

The other residence halls upgraded were: