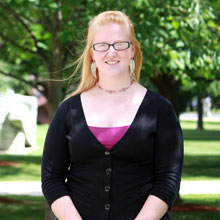 A SUNY Plattsburgh freshman is benefiting from the generosity of alumni who graduated from her hometown high school 24 years earlier.

Anna Rogoza, an education major from Granville, N.Y., is among those who received the Paula and Michael Freed Scholarship, which benefits Granville Central Junior/Senior High School graduates who attend SUNY Plattsburgh.

Making a ‘Huge Difference’ Through Scholarships

Rogoza said that the $2,000 gift “made a huge difference” in paying for her education.

“I didn’t know that someone would be so kind as to create a program specifically for Granville graduates,” she said. “I was really surprised.”

The scholarship – part of a $50,000 gift from Michael Freed ‘79 and wife Paula ’80 to the Plattsburgh College Foundation – awards a total of $10,000 annually to Granville alumni who demonstrate both financial need and academic merit.

‘A School That We Believe In’

Even though he and his wife now live in Grand Rapids, Mich., Michael Freed said that “it’s still our hometown, and the college is still ours.”

“Particularly given the economy, we just felt that this was the best way we could continue to reinvest in our hometown and at the same time, help to make education affordable at a school that we believe in,” said Freed, now the chief financial officer of Spectrum Health.  He earned his accounting degree – and Paula earned her nursing degree – at SUNY Plattsburgh after graduating from Granville Central Junior/Senior High School in 1976.

A Challenge to Students and Other SUNY Alumni

Other objectives of the scholarship, Michael Freed said, include prompting other SUNY Plattsburgh graduates to consider doing the same thing, as well as reminding the young recipients that they’ll be expected to give back as well someday.

And giving back is exactly something that Rogoza intends to do as an educator.

“Now that I am on this path, I’m really determined to make something out of it and myself,” she said.

“If I had the chance, I would try to change the world for everybody.”