As a distinguished teaching professor and director of SUNY Plattsburgh’s honors program, Dr. David Mowry has mentored a generation of students.

Now he’s playing a role in helping the next generation of students realize their potential – and he’s encouraging honors program alumni to join him and pledge their support. 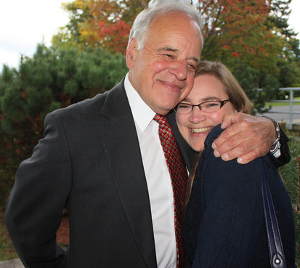 Mowry has donated $ 25,000 to the college’s foundation, which will serve as “seed funding” for an endowment in his name. It will provide a variety of aid to the honors program, including scholarships, visiting lecturers, graduate assistant stipends and curriculum enrichment.

Mowry’s involvement in the honors program goes back its very inception in the 1980s: He helped in its creation and has served as its director since then. All the expectations for the program when it began, he said, “have been realized to an extraordinary degree,” and he’s looking at ways for it to evolve.

“No vital program should ever become so self-satisfied that it becomes complacent,” he said.

Many honors program alumni, he said, have a strong loyalty to the program.

One such alumna is Regina Olin ’98. Her gift will establish the Regina and Stephen Olin Honors Scholarship, which will provide substantial awards to honors students who are 25 years or older and have a GPA of at least 3.5.

Mowry hopes that others will lend their support as well. In his 26 years as director, he has seen thousands of students go through the program. And many, he said, have told him how important of an experience it was.

“I wanted to ensure similar opportunities to many, many more students in the future,” Mowry said.