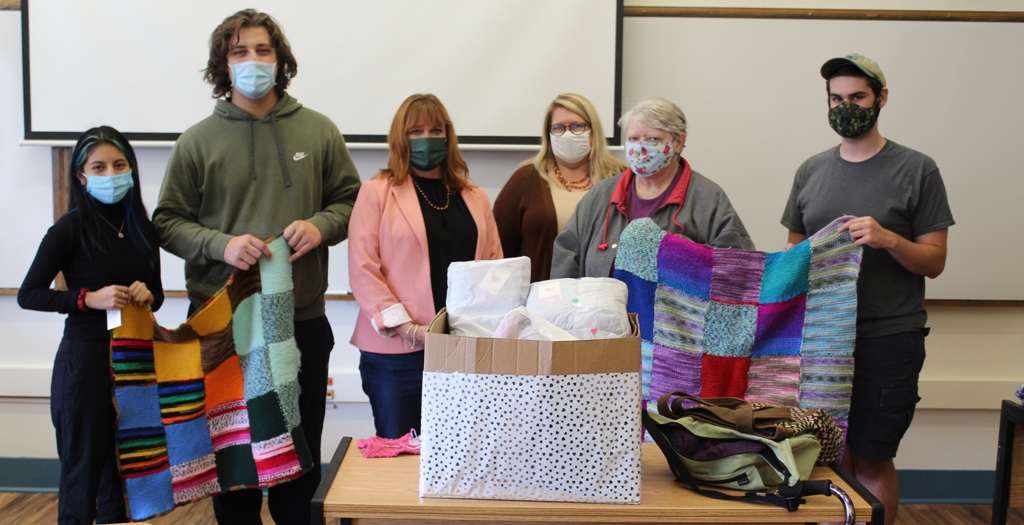 A group of Wanda Haby’s first-year students spent four weeks this semester in her Cardinal Foundations seminar learning the benefits of community service and the difference between a pearl and a stitch. 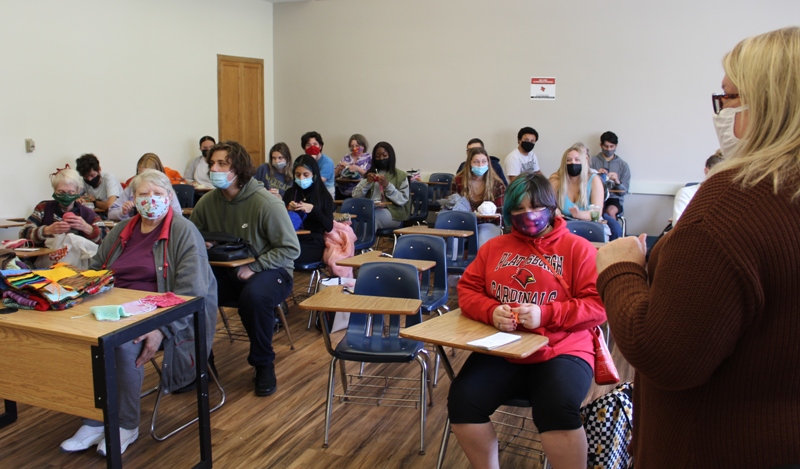 “The first day I walked into class and saw balls of yarn all over the tables, and our grandparents sitting in the corner of the room,” said Morgan Gescheidle of Highland, N.Y. “I’ll admit, I was intimidated; I didn’t know what I walked into.”

The products of all that yarn were squares made by each of Haby’s students, which were then sewn into lap blankets for folks in need out in the community. On the last day of the unit, the blankets were presented to Hospice of the North Country.

“This class is an overview, looking at how to make a difference in the world, becoming a positive agent for change,” Haby said. She hopes units like the community-service knitting makes students “become more aware of global and local issues and realize they can be inspired to take personal action in their own lives and community.”

Some students had more difficulty than others picking up the skill while not dropping the stitches.

“But all learned and enjoyed the process,” Haby said. And the overall goal wasn’t lost on the class either, she said. While it was a project that brought together two somewhat disparate age groups, it gave students the chance to see how such a project can make a difference in a community in need.

“Grandma Cathy” said the process was worth “the long haul for me to get here three times a week for four weeks, but I’m very glad I did and would do it again. I enjoyed it.”

“Grandma Pat” took the extra squares her pod students made and turned them into a hat.

“I’ve thoroughly enjoyed being here,” she said. “I’d do it again in a heartbeat.”

Peter Basile of Castleton, N.Y., said his first thoughts were, “Why would we be doing this and how would this benefit us as a person?”

“I wasn’t that great at it, and I did get frustrated at times and thought about not continuing,” he said. Ultimately, he decided not to give up “because that is not the person I am.” He thanked Grandma Lisa, how helped keep him going.

“It was a challenge,” Haby said. Students had to learn to put down their electronic devices and chat in small groups while knitting at the same time.

“It’s a great coping skill for mental health as well,” she said. “The rhythm fosters healing and is a great coping mechanism. Scientific studies show that knitting reduces levels of the stress hormone cortisol and helps focus the mind. It’s a way to practice meditation, turn off noise and have a little self-care time. 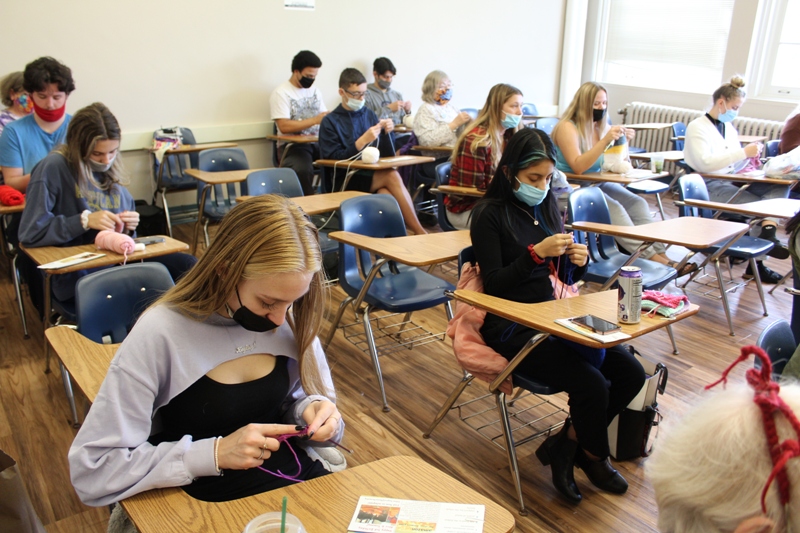 Nathan Baker of Dobbs Ferry, N.Y., was equally skeptical about what would be learned from the experience when he entered class for the first time.

“Personally, I’m not the most social of people, and meeting new faces is one of my biggest fears,” he said when he learned he’d be paired up in small groups with a volunteer grandparent. “Little did I know my coach would guide me through the ups and downs of the ball of yard stretched before me.”

Baker said he couldn’t imagine turning the yarn before him into a blanket, “let alone a square with such simple tools. It seemed unfathomable to me and the time, and I wasn’t really sure where to start.”

Getting into the Rhythm

With fits and starts, Baker began to fall into the rhythm of the needles.

“The frustrations of missing a stitch and having to undo much of my progress seemed soul-destroying at times. However, when everything was in rhythm, I felt unstoppable. In a sense, knitting can be seen in close parallel to life in general as a college student. There will be mistakes, tough times and it may feel like a menial task. However, enjoying the times that you will relish for the rest of your life overshadow all of the tough moments that someone may go through during the journey,” he said.

“Knitting has also taught me that the very foundation of being good at something is repetition and practice. The beginning of the knitting journey started me off in an unfamiliar environment in terms of what I was capable of. With the help of others, I was able to break through the barrier of unfamiliarity and start to get into my own rhythm whether that be mentally or physically,” Baker said.

Haby said a number of students “enjoyed the activity so much, they want to start a knitting club and take up a charter with ‘Knitting 4 Peace’ to make products for third-world countries and people in our own community,” she said.

That determination and seeing a project through to the end is what Haby hoped would be taken from the unit.

“Some students only made one square; others made more than a dozen,” Haby said. “The point is not the quantity but the goal of one piece and feeling accomplished to meet that goal. Learning a new skill can be challenging, imperfect, and there are many start-overs, but keep persevering and appreciate the skill of patience. Little by little, one stitch at a time lead to small successes that turn into a bigger, collaborative success.”

“At the end of the day, I felt pretty accomplished where I was able to give a little square and for it to be turned into something that will help someone makes me feel pretty good,” Basile said. “The lesson that I learned from this is patience; I had to learn that I’m not going to be great at something right away and that it would take some time for me to improve on it.”

“This unit was to knit blankets for other people and people in the hospital,” Gescheidle said. “I was stressed that I did not have enough time to complete a full blanket. Sadly, I only made one square, but that wasn’t the idea — to make a whole blanket. The idea was to learn a new life skill and give back at the same time. Even though I had completed one square, which felt great, we still had donated tons of blankets with the help of our grandparents, and the combination of all our work in the class, and that was the biggest accomplishment of all.”