Are you looking for the opportunity to do hands-on undergraduate research? At SUNY Plattsburgh, students and faculty collaborate on projects that produce scientific findings, real world applications and scholarly publications. One such research project involves a two-year field survey by faculty and students of the Boquet River Watershed in Northern New York.

The project along the 280-square mile Boquet River Watershed is funded by a $152,149 grant from the U.S. Environmental Protection Agency. Dr. Meiyin Wu, associate professor of earth and environmental science, said the project would eventually develop a wetland monitoring program and invasive species management plan for the watershed.

A Model for Wetland Assessment

"This project can serve as a model and resource for other wetland assessment and watershed groups in the Champlain-Adirondack Biosphere and across the nation," said Wu. "The watershed project is an important step for the area with sparse population where comprehensive wetland data is needed and agencies have limited staff." 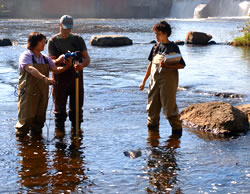 Students Take to the Field

"The students are the ones who deserve the credit, they worked so hard under harsh field conditions" said Wu. "It was a very satisfying experience for me working with people from both public and private sectors involved in the project. I particularly like to thank the landowners of our sites who generously allowed us to use their land."

"One of the Best Experiences"

Praeger, a senior from Upper Jay, N.Y., has worked with Wu for the past three years. He said he appreciated the opportunities for hands-on research that Wu has provided her students.

"This was one of the best experiences I've had here at Plattsburgh State," said Praeger.

The faculty and student crew also inventoried invasive plant species on the study sites. These invasive species are plants that were not originally from the area, but came from other areas and grew in the Boquet River Watershed.

Due to lack of native enemies, these invaders often out-compete native flora and occupy the natives' habitats. This project also enlisted volunteers who received training on how to eradicate these noxious plants.

Morgenstern, a senior from Rochester, N.Y., thought it was great to be able to get his feet wet in the field in which he wants to pursue a career.

"We identified vegetation and found invasive species," Morgenstern said. "I enjoyed this experience very much."

Invasive species including purple loosestrife, common reed, tartarian honeysuckle and common buckthorn have been located in the watershed.

The monitoring protocols developed by Wu, Kalma and earth and environmental science students were filmed by students from the Communication Department supervised by Christine Johnson, assistant professor of communication.

Stanley, a junior from Peru, N.Y., wants to produce documentaries on the environment and hopes to one day work for National Geographic.

"This project was a great opportunity," said Stanley. "Dr. Wu is our client, and there is a lot of responsibility involved."

"The footage came out well, and I think the DVD will be a success," said Stanley. "We are creating an instructional DVD, and I had to think in the mind frame that people who know nothing about invasive species are going to be watching this DVD, so I didn't want to misrepresent anything."

To learn more about the Center for Earth and Environmental Science at SUNY Plattsburgh, please contact: