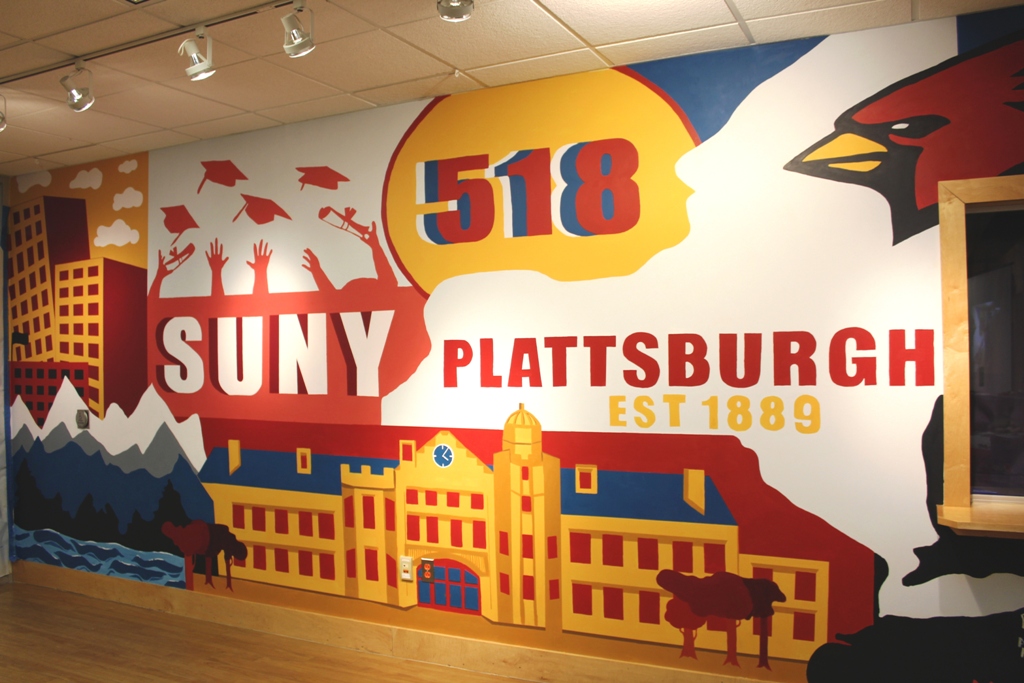 Members of the student artist club, Plattsburgh Association of the Visual Arts, unveiled a mural they painted on a wall in the College Bookstore that embodies the college and community at a ceremony Thursday, April 11.

The mural, which depicts images on campus and the region in bright red, white, yellow and blue, came about several months ago when store director, Michelle Marcil, invited PAVA members to design and paint store windows earlier in the fall. She then offered the students a blank canvas inside the store — a wall to the left of the sliding doors, behind the registers. 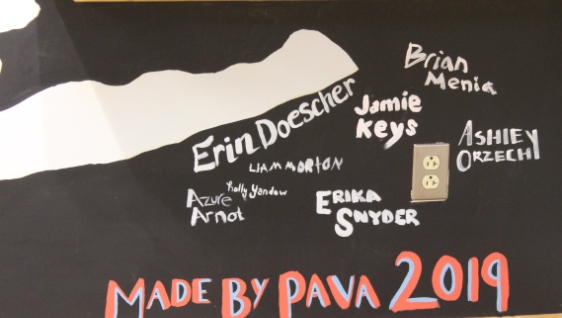 According to Chris Whalen, director of properties and marketing with College Auxiliary Services, “it was a wonderful collaboration. The students did a great job.”

The store kept the mural under wraps while it was being painted at the end of the fall semester and into the spring semester until Thursday’s unveiling at 3 p.m. More than three dozen people, including students, faculty and staff, were on hand to support the effort.

“They told us they had this wall and asked if we wanted to paint a mural on it,” said Erika Snyder, a junior in the Bachelor of Fine Arts program and current president of the association. The Clifton Park native said she and the other PAVA members jumped at the chance. “It’s a great example of a student group supporting students; we wanted to show other groups that they can have an effect on campus.”

“We’re excited to get involved,” said Ashley Orzech, a fellow junior BFA student from Morrisonville. “We received such positive feedback from the paintings we’ve done on the windows, doing a whole wall encompasses everything that everyone can relate to — what we all have in common, what we all saw in common.”

Those depictions include residence halls, Hawkins Hall, graduation caps being tossed into the air, the mountains and Burghy.

“It’s a big thing for perspective students to see when they come into the school store,” Orzech said.

“And when we come back years from now, we’ll see this mural and remember what we did when we were here. I’m very proud of our work,” Orzech said.

Whalen said a time-lapse video will be available online that shows the process while PAVA members worked on the wall. It can be found on Facebook at plattscas. For more information, contact CAS at 518-564-2035 or visit www.plattsburghcas.com.