On March 19, the Cardinals became the second NCAA Division III team to win three consecutive national championships after a 5-1 victory over University of Wisconsin-River Falls.

The only other team to have managed the feat is Middlebury College.

For the Cardinals, the big win was the culmination of a season that left the team with a 29-1-0 record.

Attendees ended the night on the ice with a free skate with the team.

‘Increase in Fan Support Each Year’

Junior forward Melissa Ames recalled how she felt when the final buzzer sounded at the championship game. In a word, it was priceless, she said.

“This is something that will stay with me.”

“It still gives us all goosebumps reflecting on this beautiful moment,” senior co-captain Andrea Ziesmann said.

Ames, who has been with the team for all three of their consecutive championships, said the subsequent wins were no less special than the first.

“Every year we’ve seen an increase in fan support,” Ames said. “We appreciate what they do for us.”

“It’s really special for us to see the support from our fans,” Leonard said, especially the young fans who come to see them play.

“The kids are just the cutest ever. They all want our autograph.”

“The Plattsburgh State women’s hockey team has secured their place in history as a dynasty.”

Taylor Greenhaw, 10, said it was exciting to see the championship game in March and to meet the players at the celebration.

Greenhaw is an ice skater, but said the team has inspired her to try hockey in the future. She was at the event with her sister, Paige, 8, and their mother, Beckie, a secretary in SUNY Plattsburgh’s Global Education Office.

“They’re inspiring because a lot of them not only excel on the ice but academically,” she said.

‘So Proud of Them’

Lois Borden, a season ticket holder, drives 45 minutes from her home in Westport to see all the women’s hockey home games.

“It’s just great,” she said of the team’s success. “They work hard. I’m so proud of them.”

Like several others, she wore her Cardinal hockey jersey to the event.

“It helps give them motivation to have the fans excited,” she said.

Parker Darrah of Plattsburgh said he went to almost all the home games this season. He was making his way around the stands, collecting autographs from each player.

“Didn’t we just do this?” President Ettling said at the podium. “It’s terrific—it never gets old. You had an extraordinary year and I enjoyed watching it.”

Mannix read a resolution honoring the team and Coach Kevin Houle, who has been coaching the women’s hockey team for 13 years.

“You’ve set an amazing standard for hockey programs,” Calnon said before giving each member of the team a City of Plattsburgh hat as a token of the city’s congratulations.

Cashman said the win made him proud as an alumnus of SUNY Plattsburgh.

“I was here during the (championship) game and it was absolutely electrifying,” he said.

“The Plattsburgh State women’s hockey team has secured their place in history as a dynasty,” Cashman said, reading from a resolution of recognition from the Plattsburgh Town Council.

Then Houle took to the podium, praising the team’s hard work, sacrifice and focus throughout the season. He expressed his appreciation for those who support the athletes.

“Plattsburgh women’s hockey has the best fans in women’s Division III hockey,” Houle said. “You are a huge part of the success of our program.”

While the team will continue to celebrate their victory, they already have turned their attention to next season.

“We’ve been off the ice for two weeks and everybody is already looking forward to playing again,” Leonard said.

Houle expressed the same eagerness in the closing of his speech. 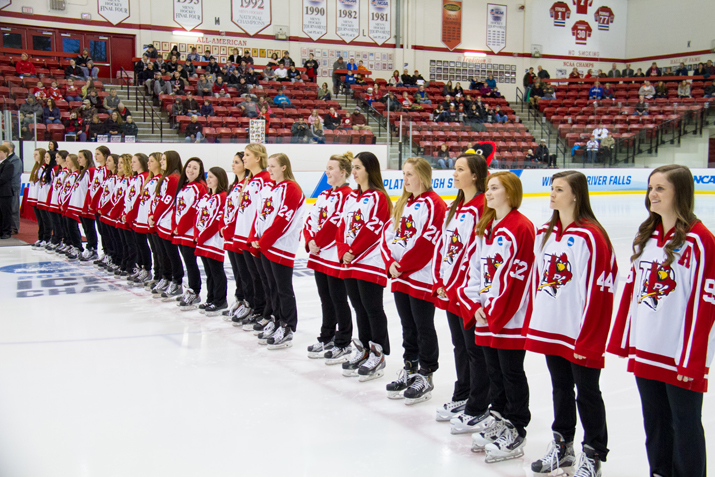 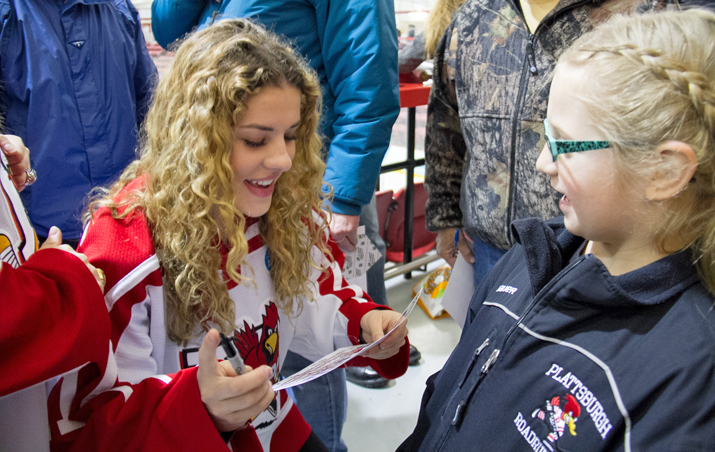