This winter, five SUNY Plattsburgh teams made it to their conference playoffs and three went even farther. 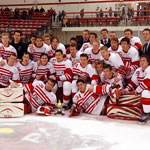 Despite the fact that the men's hockey team was ranked as as the number one Division III team for the longest stretch in school history, the year ended on a somber note, losing in the quarterfinal round of the NCAA Division III playoffs.

Head coach Bob Emery compared the season to a great book that is ruined by a lousy ending.

"Our regular season and SUNYAC playoff run were like no other, filled with many wins, lots of fun and excitement," said Emery. "Then, all of the sudden, in 60 minutes it was over."

Beyond the disappointing finish there were many bright spots. The team won its second-straight and 19th overall State University of New York Athletic Conference Championship when freshman Vick Schlueter scored the game-winning goal four minutes and 20 seconds into overtime to lift the Cardinals to a 5-4 victory over archrival Oswego. The win also gave the team an automatic bid to host the second round of the NCAA Division III National Tournament. Unfortunately, the Cardinals lost to the soon-to-be national champion, Neumann College, 5-4 in a heated overtime game to end their season. 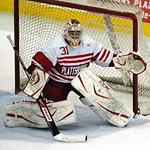 Emery was named the Coach of the Year in SUNYAC, while sophomore goalie Bryan Hince was named the league's Player of the Year. Plattsburgh became the first conference member in history to land five players on the men's hockey All-SUNYAC First Team as seniors Nick Rolls and Joey Wilson, along with sophomores Dylan Clarke, Ryan Corry and Bryan Hince were honored. The Cardinals (22-1-2) captured their second straight SUNYAC regular-season title with a 15-0-1 conference ledger.

Rolls and fellow senior Riley Hill each crossed the 100-career games mark and 100-career points mark during the season, en route to helping the Cardinals rank as one of the top-scoring offenses in NCAA Division III men's hockey. 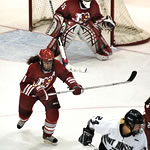 The two-time defending National Champion Cardinal women's hockey team earned its sixth-straight bid to the NCAA Division III Tournament after placing second in the Eastern College Athletic Conference West Division Tournament. The team ended the regular season with an overall record of 20-3-2, placing third in the ECAC West with a conference record of 15-3. 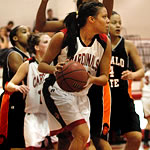 Meanwhile, the Plattsburgh State women's basketball team is coming off its best season since 2003, having finished tied for sixth place in SUNYAC with a 12-14 overall record, 8-8 in conference play, and having earned its first SUNYAC Championship Tournament berth in five years.

The Cardinals also had two members named to the All-SUNYAC squad-sophomore forward Taylor Amarando has been named to the Second Team All-SUNYAC and freshman guard Erin Silberberg earned an Honorable Mention nod.

"We had a very positive season which has made our returning players that much more driven for further success next season," head coach Cheryl Cole said. "We had great team leadership and chemistry. Everyone on the team had a role, and we were able to get production from many different players as we played our way back into the SUNYAC hunt!" 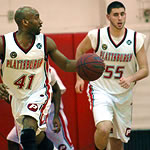 The Cardinal men's basketball team finished the 2008-09 season with an overall record of 8-16, 6-10 in the State University of New York Athletic Conference, snapping the program's SUNYAC run of three conference championships in a row.

"The men's basketball team was in a rebuilding mode during the 2008-09 season. We started three sophomores and a freshman and were competitive in every contest," commented head coach Tom Curle. "The lessons learned this season will be important to the team as we make our way back to the top of the conference next year."

Sophomore guard and All-SUNYAC First Team honoree Chris Ruiz provided the team with a season-high 41 points to lift the Cardinals past the 2009 SUNYAC Tournament Championship-winning Brockport Eagles for a 99-92 overtime victory during the regular season. 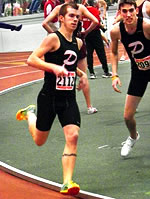 "We had a great season, our talent showed through at ECAC's with a top 10 finish, with mostly everyone returning things look great for the future," head coach John Lynch stated. 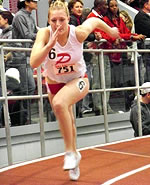 Closes in on School Records

For the women's track and field, Mahlia Ewers not only helped the team improve upon last year with a seventh-place finish at the SUNYAC Championships, she also managed to qualify for the ECAC Division III Championships in three different events (200-meter dash, 400-meter dash, and 4x400-meter relay team). She also earned a spot on the First Team All-SUNYAC, while teammate Jenny Schaffhouser and Shannon Young were named to the Second Team.

Schaffhouser hit a provisionally qualifying mark for the NCAA Division III National Championships when she placed third in the 5000-meter run in a time of 17:38.59 at the ECAC Championships, shattered her previous season-high by 30 seconds.

When all was said and done, head coach John Lynch was optimistic about his team's future: "I was very happy with a lot of our individual performances over the season. We were very close to some school records and have a very young and talented team that should keep growing."

For more information about athletics at SUNY Plattsburgh, please contact: