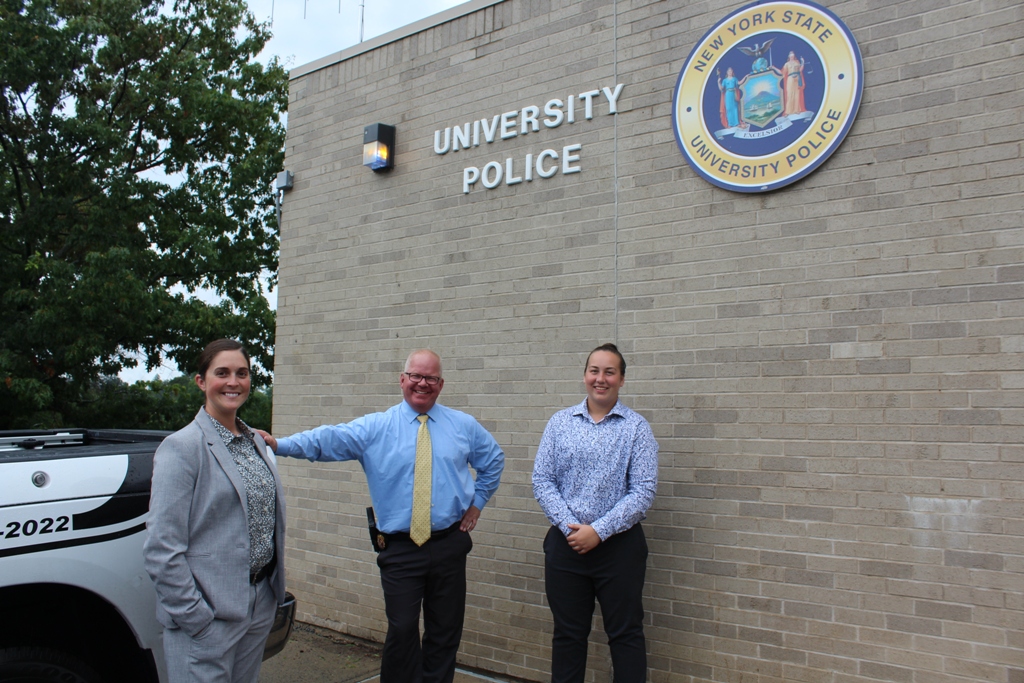 When Tina Bedard entered her internship in January 2019 with University Police, she had an inkling she wanted a career in law enforcement but wasn’t sold on being a campus officer.

Today, the senior is convinced it’s exactly what she wants to do after graduating next May.

“It was during my junior year; I wanted an internship, and I knew I wanted to be an officer. I put my application in at a couple places, including the sheriff’s office,” Bedard said. After an interview with UP Investigator Jessica Facteau, the deal was sealed.

“I asked her why she wanted to do the internship, and she went over all the things she’d already done — internship with probation, internship in accounting for a construction company. She knew she wanted to be a state trooper, but she also wanted to know what it would be like to be a University Police officer. Her answers were just what I was looking for.”

What Facteau and University Police are looking for in their interns are students who want a true, hands-on experience, one where they are riding with officers, writing reports, working the front desk, sitting in on interviews and interrogations, according to Chief Patrick Rascoe.

“I call them ‘UP Lite,’” he said. “They come in and work side by side with officers and become part of the department so they can get a true understanding and impression of what it’s like to be a UP officer.”

While Bedard was working alongside officers, she was never in harm’s way, Facteau stressed.

“She rode with me, with other officers,” Facteau said. “She saw traffic stops, ambulance transports, interviews. She got to see relationships between the officers and the community. We kept her safe, but she did reports next to the officers doing the real reports. She covered some events with us.”

“Tina made us better,” Rascoe said. “She wasn’t just taking from us; she was contributing. She played on our basketball team for a tournament, she contributed toward our mission.”

“The best thing we can get from the program is an intern who becomes part of the department,” Facteau said. Rascoe agreed.

“It’s important to have buy-in, from us and from the interns, and we had buy-in from Tina,” he said.

The idea for a University Police internship came about after discussions with the criminal justice department after Facteau approached the chief to say they needed interns. Rascoe said he met with criminal justice program chair Dr. Wendy Gordon to discuss what an internship needed to entail, “and then I handed the baton off to Jess,” he said.

For her part, Bedard, who worked 18 hours, which translates into six credits, in her internship each week in addition to holding down a part-time job and playing spring Cardinal soccer as goaltender, said she “wanted something hands-on. I definitely got it.”

“I didn’t know much about UP when I started. It opened my eyes. It was definitely more of a learning experience,” she said. “I got to interact with students, got to see how being an officer really is — it was real life. And the officers, inspectors, the chief all treated me like an equal. They treated me very well.”

The Saranac native reiterated that the department involved her “with everything they were doing.”

And her position here helped her land a summer job with the state Department of Environmental Conservation working as a park ranger at Point au Roche, Cumberland Bay and Macomb state parks. And as she navigates her senior year, she is looking ahead with a plan to take the tests that would set her up for a position with SUNY Plattsburgh University Police.

Rascoe said there are a number of requirements, including having at least 60 college credits, taking and passing the Civil Service exam as well as passing physical, medical and psychological exams. Candidates are drug tested and have to submit to a background check, among other requirements.

“Knowing Tina’s work ethic and her abilities and having her as an eligible candidate according to Civil Service rules would be very beneficial for me,” he said.

“I think going into it she was unsure of the path she wanted to go down,” Facteau said. “At the end, she holds the two — state trooper and University Police officer — as equals. It worked out for us — she saw it as this collective, this cohesive relationship. She became part of our department.”