Those Lost in 9/11 Remembered at Hawkins Pond Ceremony 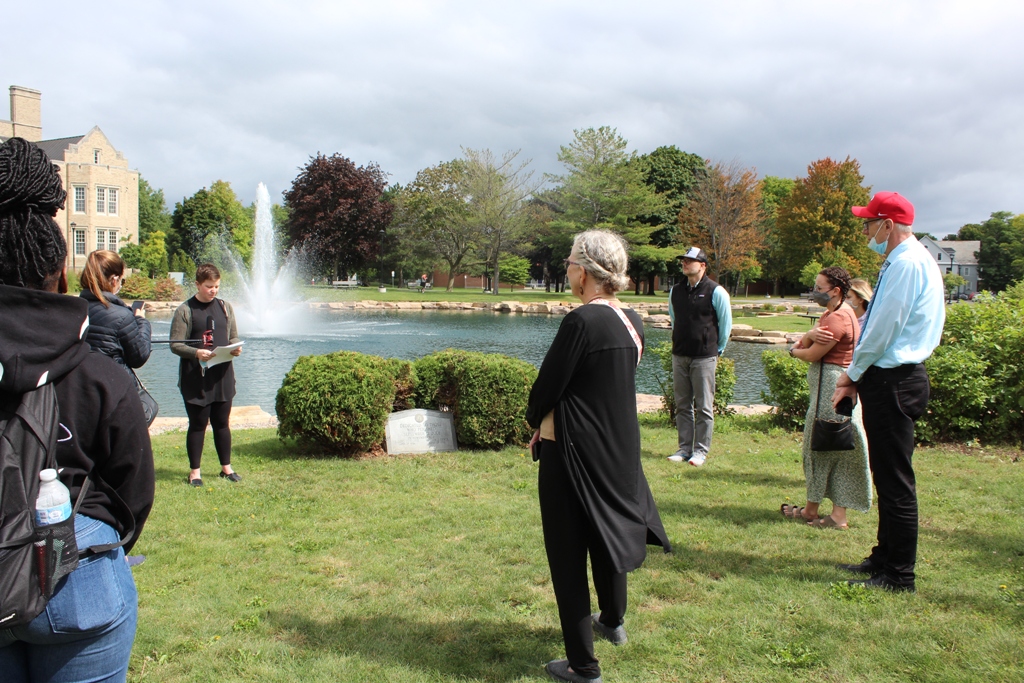 SUNY Plattsburgh, in conjunction with the Plattsburgh Circle Omicron Delta Kappa, hosted its annual commemoration of 9/11, this year marking the 20th anniversary of the day terrorists flew planes into the Twin Towers in New York City, the Pentagon and a field in Pennsylvania.

The small gathering at the memorial plaque at Hawkins Pond paid respects to all those who perished, but especially remembered Robert Sutcliffe, a 1984 graduate who worked as a broker at Harvey,  Young and Yurman, and William Erwin, a 1992 graduate who was a broker for Cantor Fitzgerald. Special recognition was paid to Brian Scott Falb, a state trooper and 1992 graduate who was a first responder that day. Trooper Falb died of cancer in March 2017.

Bella Anderson, president of Plattsburgh Circle ODK, welcomed the gathering, saying the college and ODK hopes the annual ceremony assists “in helping others heal from the tragic events that took place on that day,” she said. “We believe that there are timeless lessons that we all  need to be reminded of, in hopes that this type of event does not happen again. At the forefront of these lessons is to teach individuals, groups, communities, states and countries to resolve conflict in nonviolent and peaceful ways.”

Of special note is a piece acquired on loan by the Plattsburgh State Art Museum by Noah Savette, “Tempered by Memory,” a metal sculpture made through the World Trade Center Steel Distribution Program, which has provided steel from the wreckage available for memorials in every state in the United States and in seven foreign countries.

Dr. Ashley Gambino, associate professor and chair, communication sciences and disorders and member of ODK, spoke to the group, telling of how, as a freshman in 2000, including her roommate from Japan, she made friends from around the world as well as from around New York.

“I invited these friends from around the world home with me and took them out to dinner when my parents visited; I wanted to help them feel safe and welcome here, even though ‘here’ wasn’t exactly my home yet, either,” Gambino said. “I viewed these amazing young people as my new family and knew we could change the world together.”

When she returned to campus as a sophomore and RA in the fall of 2001, she remembered seeing “the horrific events unfold on television” and rushed back to her dorm room in Moffit Hall, where she “attempted to call my family to find out if everyone who worked or lived in New York City was OK.” Overloaded phonelines made it difficult, but she was able to finally get through to family and found they were all safe.

“What didn’t take time, what wasn’t drawn out, was the immediate sense of community that developed on campus,” she said. “Despite the fear and pain that many were experiencing, we came together in a place that was instantly and immediately exactly home for all of us. Those who were worried about friends and family members impacted by the tragedy were comforted by the same international students who had been the ones receiving comfort for their homesickness just a semester ago.

“Our differences didn’t matter; our basic human need of security and comfort in difficult times brought us together as a family in a way that DNA could never do. Today, so many years later, there are many of us who are again experiencing pain and fear on campus. Those who are experiencing fear need security; those who are experiencing pain need comfort,” Gambino said. “The individuals who are struggling need their family to rally around them. Be that security. Be that comfort. Be that family.”