Elwess, who received the Chancellor's Award for Excellence in Teaching in 2004, has co-authored numerous research articles with students in her six years at Plattsburgh. She has also given more than 20 invited presentations and sponsored numerous student presentations at local, regional and national conferences, including the National Association of Biology Teachers. General biology, genetics, bioinformatics, communicating biology and an honors course on bioethics and biotechnology are but a few of the courses she has taught at SUNY Plattsburgh.

Dr. Richard Robbins in the Anthropology Department and Dr. Nancy Elwess in the Biological Sciences Department are tops as teacher-scholars. SUNY Plattsburgh is proud of its nationally known and honored faculty who dedicate themselves every day and in every way to teaching our more than 6,000 students and helping them to find their highest potential.

"This is a great honor for Drs. Elwess and Robbins," said Dr. John Ettling, president of SUNY Plattsburgh. "We are proud to have them as members of our faculty." 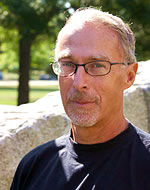 "It is always nice to be recognized and praised, whether by parents or peers, or whoever," Robbins said. "I think, among other things, it validates a decision to focus a career on teaching largely undergraduates at a publicly funded college. I've been fortunate to work with colleagues who share that dedication, and the recognition has as much to do with their commitment to teaching as it does to mine."

Successful Teacher at the Core of Successful Anthropologists

The AAA, with more than 11,000 members world-wide, is the largest association of professional anthropologists in the world.

Nominees come from colleges and universities across the country. And while Robbins said he was aware he had been nominated, "the award nevertheless was a big surprise, and, obviously, was very gratifying and a little humbling," he said.

Robbins has spent his entire teaching career at SUNY Plattsburgh, arriving as an instructor in 1966. He was promoted to assistant professor in 1969, to associate professor in 1972 and to full professor in 1996. In 2002, he was named SUNY Distinguished Teaching Professor of Anthropology. He also received the SUNY Chancellor's Award for Excellence in Teaching in 1977.

Robbins and his family, wife Amy Valentine (City Councilor) and daughter Rebecca, will travel to Washington, D.C., in November where he will accept the award at the Association's annual meeting. 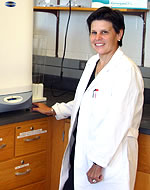 SUNY Plattsburgh has a shining star in the Biological Sciences Department. Her name is Dr. Nancy Elwess, associate professor. The National Association of Biology Teachers (NABT) has named her the Four-Year College Biology Researcher/Teacher of the Year.

"It hasn't sunk in yet," said Elwess. "I am very excited. This is quite an honor."

NABT, which is comprised of more than 9,000 educators from across the country, empowers educators to provide the best possible biology and life science education for all students.
The selection of the Researcher/Teacher of the Year is based on excellence in research in biological science education as well as teaching.

"They are looking for creative approaches to teaching at several different levels," said Elwess. "NABT was also looking for the positive impact the teacher has on the students. They were especially impressed with the published research articles I have co-authored with my students. We have been engaged in very serious research."

Students Attest to her Love of Science

Felecia Edwards is one of the students currently working on a research project with Elwess.

"Dr. Elwess has a love for science. It's very obvious, and she shares it with her students," said Edwards, who is a senior cellular biology major from Troy, N.Y. "Between classes and research, I have learned a lot from Dr. Elwess. She has provided me with different tools that will help me in graduate school."

Sandra Latourelle, adjunct faculty member of biological sciences at SUNY Plattsburgh, nominated Elwess for the award, which was recently presented to her at the NABT National Conference in Milwaukee, Wis.