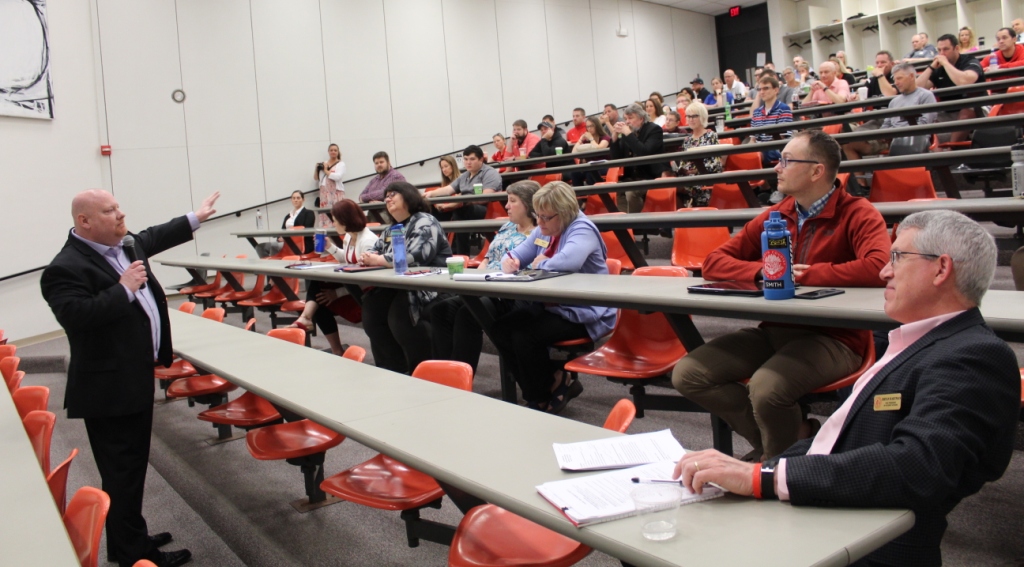 Better understanding differences and developing greater skills to more effectively work with students was the focus of a day-long gathering this week of members of the SUNY Plattsburgh Student Affairs division.

The event centered on starting conversations and making the campus better for students, faculty, staff, visitors —anyone who has a reason for being at the college.

“In order for us to be able to support the changing dynamic and provide for the students we serve, we need to evolve,” said Bryan Hartman, vice president for student affairs.

The program addressed topics as varied as generational differences, skills to effectively work with and support members of the LGBTQ+ college community, advocacy for disadvantaged and diverse students in athletics, and addressing interoffice differences and conflicts. It was coordinated by members of the Social Justice Steering Committee.

Hartman said that the committee evolved from a grassroots effort. Appointing University Police Investigator Jessica Facteau and Jacob Avery, assistant director, Center for Student Involvement, as co-chairs, groundwork began in the fall for what would eventually turn into the day-long event.

Thanking members of the steering committee, as well as Avery, Facteau and Ashley Durocher, associate director Student Support Services, for their “efforts and dedication in keeping discussions going,” Hartman said his hope was that the some 80 gathered in Yokum Hall “had come to listen, engage and continue the conversation we’ve been having. Our students are evolving; they’re changing,” he said.

Hartman said that as a division, student affairs “has acknowledged that our students are changing, which requires our approach to how we serve and support our students to change as well.”

“To create the change we are seeking, it takes each of us to engage in on-going conversations. The conversations can be difficult. But if you bring your authentic self, your honesty, that’s how we’re going to get through this,” he said.

“This summit is the next opportunity for members of student affairs in our long-term commitment to create these educational moments at least twice a year. Professional development like this allows us to better the college’s mission of preparing students for academic, professional and personal success,” Hartman said.

Tom Bull, a 2004 SUNY Plattsburgh master’s alumnus with a degree in school counseling, was keynote speaker. A counselor in the Peru Central School District, he is also a public speaker and consultant on dealing with life challenges and transforming those challenges. He served as the keynote address breakout session facilitator.

“The world is telling you to be you. With courage, you step out, start becoming the person you want to become, and then our culture asks, ‘Who are you trying to be? Who do you think you are?’ Families, friends, co-workers become uncomfortable because of the changes you’re making in your life.

“Imagine as an organization, as a university, you want to take the steps to change the culture: What type of push back are you going to expect? People are always going to say, ‘It’s always been that way.’ But it starts with each of us having a deep look at what it is we’re giving our power and authority to, we have to start looking at the possibilities. Change is just the fear. What if your change becomes the catalyst for good?,” he said.

Facteau said that through the Social Justice Steering Committee, professional development has been going on throughout the year in student affairs “on an array of topics” that address issues unique to the to the “I-Gen, which is our current student population,” she said. I-Gen, or I-Generation, often describes those born after 1995, or the Internet generation. The summit even included a break-out session on understanding the mental-health needs of this population.

With a vastly different set of rules guiding us today than was true even a decade ago, it was important to get the conversation started.

“We hope to bring back what we learn here today and keep it going,” she said.

“Bryan’s made a point of making social justice a priority — for the division and beyond,” Avery said. “He asked us to run with it, and asked Jess and I to take on the committee as co-chairs. We did run with it, and have had multiple events, workshops and more that culminated in this summit.”

“That’s where Ashley stepped up, making this what I is — a team effort,” Facteau said.

“We hope it will be just one of many” Durocher said.