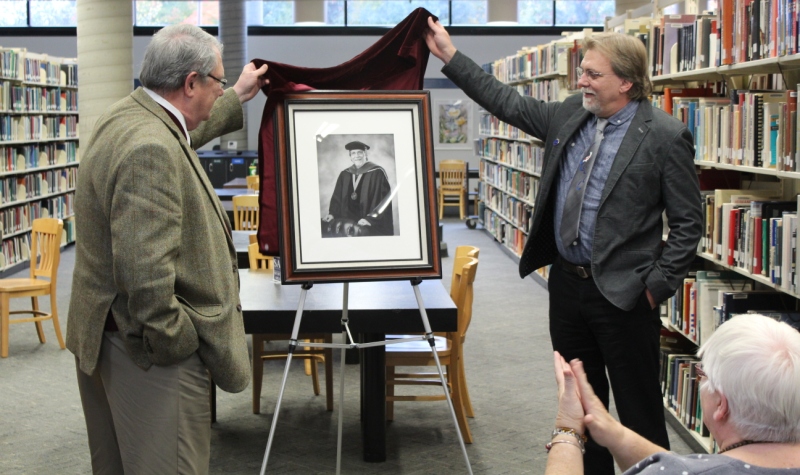 Dr. Timothy Mihuc’s portrait joined the 40 others of distinction in Feinberg Library as the college feted the professor in the Center for Earth and Environmental Science for achieving the rank of SUNY Distinguished Service Professor at a ceremony Friday, Oct. 12.

Mihuc, who joined the faculty in the center as an assistant professor in 1999, is also director of the Lake Champlain Research Institute. He became one of only 15 faculty promoted across the 64 campuses that comprise New York’s state university system. 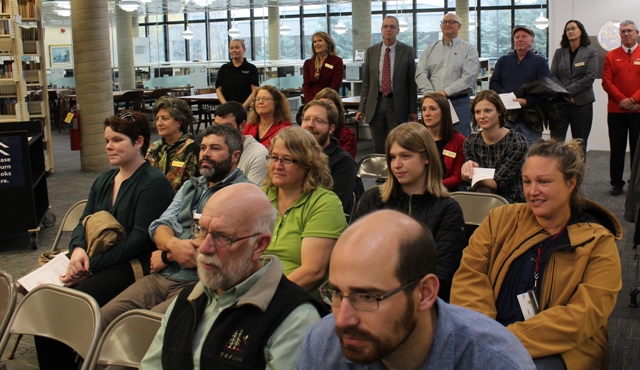 “Tim, congratulations and thank you on behalf of the faculty and staff for all your dedicated service to SUNY Plattsburgh, our alumni, the community and especially our students,” said President John Ettling in his opening remarks. “You are extraordinary and represent the very best we have to offer. The entire campus and community and alumni are proud of all you do and so grateful you have chosen to do it here.”

Dr. David Hill, interim provost and vice president for academic affairs, praised Mihuc for his scholarship, his passion for Lake Champlain and its environs, and his research in the LCRI.

Dr. Kathleen LaVoie, professor of biological science, not only nominated Mihuc for the honor, as former dean of arts and sciences, she hired him in 1999. 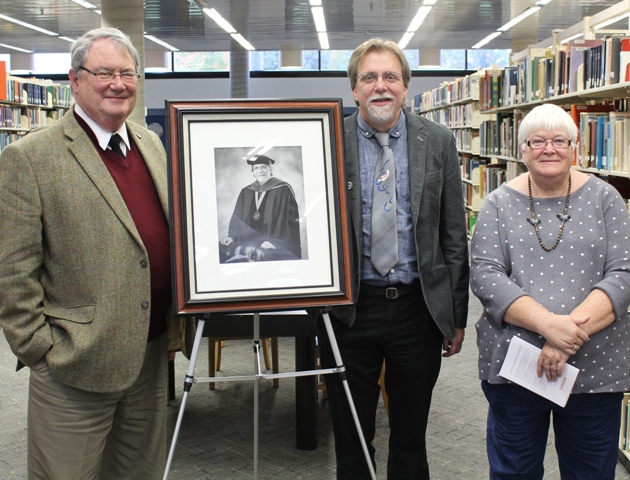 “I’m delighted to talk about Tim,” LaVoie said. “When I arrived in 1997, the LCRI already existed.” After acquiring state funding to buy the research vessel the RV Monitor, “we had the opportunity to build the LCRI and strengthen the commitment. And I got to hire Tim Mihuc. It was one of my biggest achievements.”

LaVoie praised Mihuc’s devotion not just to the program and institute but to the students, the scholarship he has produced, his leadership, research and service.

“He took the LCRI and turned it into the professional research institute it is today,” she said. “I am very proud of all your accomplishments and all you will accomplish in the future.” 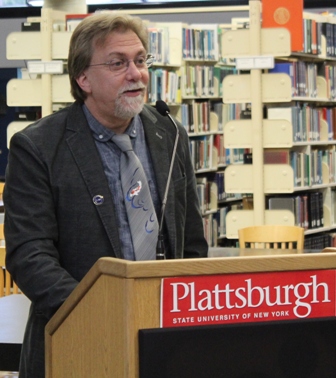 After being introduced by Dr. Andrew Buckser, dean of arts and sciences, Mihuc took to the podium, thanking those gathered in the second floor of the library. He thanked Ettling for allowing him the academic freedom to pursue his Lake Champlain research, even when the results may not be favorable to the bass-fishing tournaments that are run throughout the summer months on Lake Champlain.

He thanked LaVoie for her “many years of sage and useful advice that has helped me all my career. You really have been a good supervisor and a good firend.”

“It’s all about the students we’ve helped over the years, who number in the hundreds; the money spent on those students, which numbers in the millions. And the group that pushes those students along — all my colleagues and all the staff in the LCRI have helped. There are far too many to mention, new and old,” he said. “There have been many things in the LCRI that have been exciting to participate in. But getting the students involved. That’s what’s been important to me. And my advice? Do it. For your institution; for your discipline; for your students.”