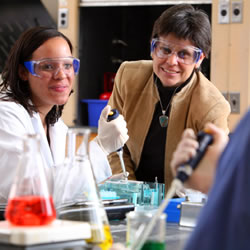 This year, the professor of biological sciences is one of only a handful of college faculty from across the country to receive the award, which was designed to recognize the crucial role that mentoring plays in the academic and personal development of students studying science or engineering and who belong to minorities that are underrepresented in those fields.

At the ceremony, President Obama is also expected to announce key new partnerships in his campaign to reach his administration's goal of moving American students from the middle to the top of the pack in science and math achievement over the next few years.

The event will be broadcast live at http://www.whitehouse.gov/live.

Who: SUNY Plattsburgh Associate Professor Nancy Elwess.
When: 1 p.m. Jan. 6, 2010
What: Dr. Elwess will receive the Presidential Award for Excellence in Science, Mathematics and Engineering Mentoring.
Where: At the White House. The ceremony may be viewed live at http://www.whitehouse.gov/live.
Notes: Read the spotlight story here. The White House has also posted a news release about the event.